You might prefer Subversion over Git. You might pledge for self-hosted solutions over SaaS offerings. So you will either love or hate GitHub. But one thing is objectively true, whether you want it to be or not: GitHub has changed the way we code - especially in the open source realm - radically.

These days, just a few months from its sixth birthday, GitHub hosts 9.4 million repositories for its 4.6 million registered users. You might be one of them, with a few repos of your own. I can say that about 30% of my daily work is dependent on GitHub. An outage will not stop my workflow - thanks to the design of Git - but when you are using a tool that much, efficiency is king.

Why would you want a GitHub client on your iOS device?

We as developers are normally a geeky bunch and for the most of us it is a wish come true to make our money through coding. It's something we love to do: I know it is for me. When we love our work, and our private interests are also very technical, we tend to "overdo" it: Be efficient and get more done in the same time!

After that little philosophical detour, let me tell you how to give yourself a little more time outside of coding while still achieving the same goals.

Reduce your wasted time on GitHub.com!

How can you be more efficient on GitHub?

This results in discussions on the issue tracker, via email and instant messaging. While GitHub's issue tracker is better than most, and definitely more efficient and open than endless email discussions, it takes up a lot of time. In fact, it takes up so much time that it often results in countless open issues and ignored pull requests. That's input and contributions that have the potential for to save you time and make the project better.

The bigger the contribution, the longer it will take you to evaluate and decide what to do about it, but feedback is important in order to anticipate the needs of the users and make the product better.

Mail notifications are a nice feature until you get push mail (a feature which everyone should have but it also forces you to filter your inbox intelligently) and your phone is ringing every 5 minutes. Nothing on GitHub should be so critical that you need to be aware of it in real time. Just check your notifications regularly via one of the apps.

My iPhone is my favorite tool for discovering new open projects on GitHub. I simply follow a lot of WordPress folk whose work and opinion I highly respect, and I can see all of the repos that they star throughout the day. Just scroll through your personal GitHub feed and you can see newly starred, forked or created repos by the users you follow.

GitHub is big and you need tools to properly use it. There are two major players on iOS: Gitty and iOctocat

Both are utilizing the extensive GitHub API to deliver the great experience you get on GitHub.com natively on your iOS device. Neither of these apps is affiliated with GitHub, so both are limit by the public APIs capabilities.

My short review will give you an overview of the differences and main features that I use the most. So you can not expect every small feature to be assessed. For the full feature set, go to the websites of the apps themselves.

Note: I only tested the apps on the iPhone 5!

My review consides the "pro" version of iOctocat at all times!

Apple pushed hard for flat design with iOS 7, Gitty has already been flat for a long time and iOctocat flattened its UI with Version 2 in August this year.

I make a connection between flat design and simplistic design (exactly - I am not a designer) so I like the fact that iOctocat reduces displaying images to a minimum to conserve the limited screen space on small devices. However, while helpful this is helpful, it does not suffice to put it ahead of Gitty in this category.

GitHub.com users know the workflow and breaking with it would be a very bad idea. The content is organized in a very similar way in both apps, but there are some conceptional differences:

Conclusion: For most users this might not be a problem, but for me the menu gets too bloated with a growing number of organization memberships. 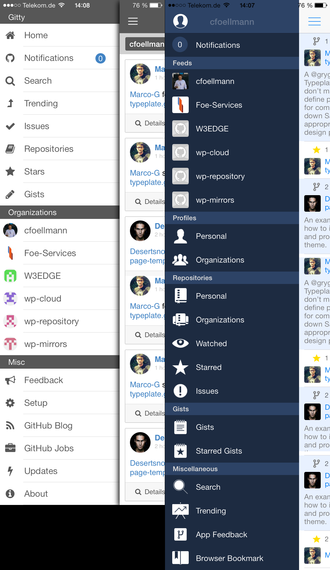 GitHub iOS apps are productivity tools for easy access on the go and I do not like to reading long texts or code on a tiny screen. Considering this, I consider the repo overview in iOctocat to be far superior. You get the description, a quick way to open detailed info and one-click staring (my way of bookmarking projects for later). Gitty adds more clicks than necessary to some actions and you the need to scroll to get to all of the categories of information connected to the repo. 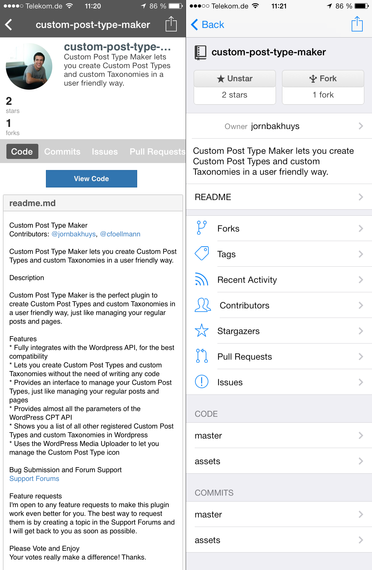 As you can see, three issues are already filling the screen for Gitty, while the table view in iOctocat allows for 10 issues to be displayed at the same time. Easy filtering on issue status is only available in iOctocat.

A plus for Gitty: you can see how many replies an issues currently has! 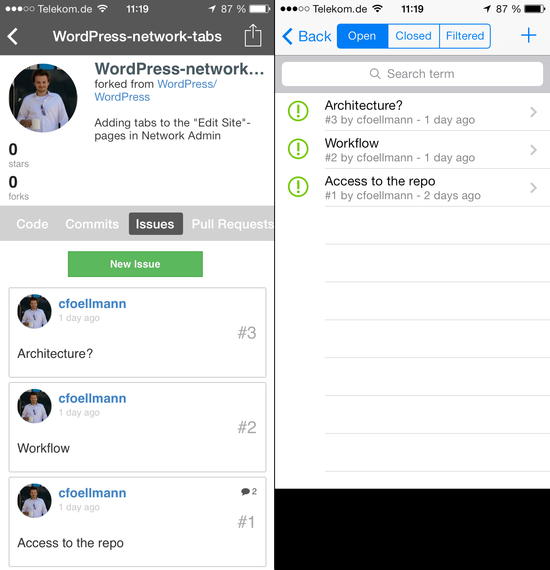 Working on issues might be the most valuable function of these apps. Both do a good job on this, giving you a nice interface and displaying the "metadata" of the issue such as labels, assignee and linked milestone. Changing the "meta data" is currently only possible in iOctocat. 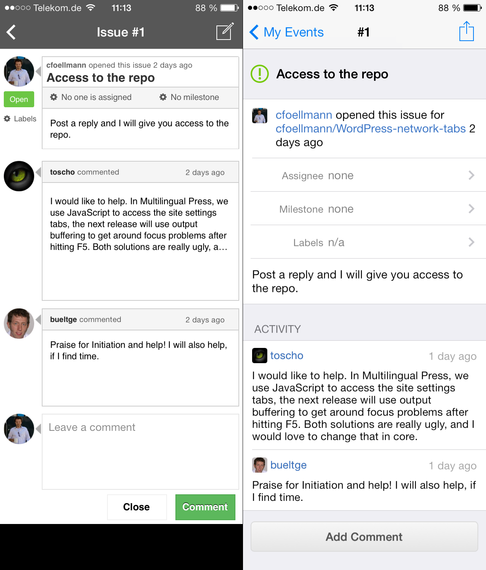 Gitty allows you to log in to your account, optionally with "two-factor authentication", to access all of your organizations, public and private repos, the issue tracker and all of your personalized feeds.

iOctocat goes way beyond that. Login with "two-factor authentication" to multiple accounts on GitHub.com or your own GitHub Enterprise installation

Yes, even on iOS devices there are limiting factors. For both apps, the following applies:

The age of the projects helps to put my findings in perspective. The maturity of these two apps is very, very different.

Support and feature requests is the input that every project needs in order to improve. This is the only way for developers to know what their users need and want from their application. So it is no wonder that the app with the far longer overall life cycle trumps the younger one in most categories.

On iOS <7, a short release cycle was a bit of a pain for the user but with auto-updates I can hardly wait for new features to be released in iOS apps.

Both apps come with a price tag uncommon for the App Store. Gitty currently costs $9.99 (or your local equivalent) (with a freemium model to come?). iOctocat just switched to a freemium price model a few weeks ago. The free app has an in-app purchase option for 8,99€ (or your local equivalent). The "pro" version gives you access to your private repositories, notifications, and more.

I contacted @dennisreimann, creator of iOctocat, to ask him about his motivation for changing the pricing model. He confirmed my assumption of why he went down this road:

A price of around $10 is a few times as much as most of us are used to paying for an iOS app, so potential users are unsure whether the app is worth it. To mitigate this problem, he aligned the app with GitHub's pricing model. Get all features for your open source (public) projects for free, and pay if you want to use private repos.

If you skimmed the text and skipped to here (because of TL;DR) you might have a slightly the wrong idea by now:

Let's get to the end with a few words about GitHub on iOS: Web and Smartphone software is very fast-moving and no one knows where GitHub, iOS or any of the apps are going to be in 2 or more years' time. Currently - in my humble opinion - GitHub, iOS and iOctocat rock! But Gitty is close on its heels, with a lot of potential and overall a solid performance in comparison to the veteran app.