In the midst of his presidential candidacy, former New York City Mayor Rudy Giuliani now faces a looming government investigation into his handling of the radios used by firefighters on 9/11.

The investigation, which will examine how the FDNY ended up using faulty equipment during the terrorist attacks and why Giuliani gave a no-bid contract to Motorola for that equipment, has been endorsed by New York City Councilman Eric Gioia, chair of the city's oversight and investigations committee. 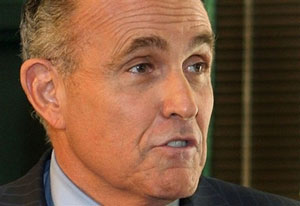 "I will do everything in my power to get answers, to get the truth," said Gioia, a Democrat. "These families deserve answers and really the entire city and our country deserve answers."

Calls for an investigation were first proposed by filmmaker Robert Greenwald who has documented Giuliani's handling of 9/11 in a series of shorts for Brave New Films. In The Real Rudy: Radios, Greenwald documents how radios used by the FDNY on 9/11 were the same ones that malfunctioned during the 1993 attack on the Twin Towers. When - eight years later - Giuliani finally purchased new communications equipment for $14 million from Motorola, it was never field-tested. A week later, the equipment was recalled after a firefighter's mayday went un-heard. Giuliani reissued the old batch of radios. And on 9/11 when a police helicopter warned that the North Tower could collapse, more than 120 firefighters remained inside.

"To know that we had failing radios in 1993 and did virtually nothing until September 11 is shocking to say the least," said Gioia. "To watch this documentary and see the important questions that were asked and seemingly unanswered and ignored for so many years, it's disturbing."

More than 20,000 people signed a petition demanding an investigation into Giuliani's handling of the FDNY radios. In an interview posted on YouTube, Gioia confirmed that he will take the steps to initiate public hearings, including sending out letters to fellow council members and requesting pertinent documents. Greenwald praised the initial steps forward.

"Brave New Films is thrilled with Councilman Gioia's response to our petition for a City Council investigation into Giuliani's failure to equip firefighters with the radios they needed on 9/11," Greenwald told the Huffington Post. "The groundswell of support for our petition shows the depth of Americans' desire for accountability."