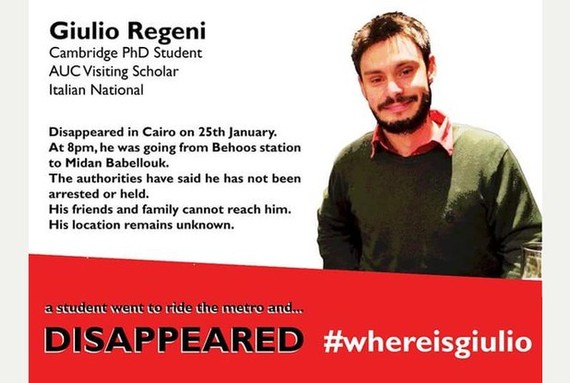 It is as if Giulio Regeni was crucified for us all, but instead of taking away our sins, he exposed the sins of Egypt's and the world's ruling elites.

We may be unsure whether it is Egyptian security personnel who tortured and murdered him. We might never know, ever - simply because corrupt elites do not allow for transparency and the availability of information. But we do know he went missing on the fifth anniversary of the January 25 Uprising when Egyptian security apparatuses were on top alert, guarding the streets against any possible attempt at a commemoration of the 2011 Revolution in the public sphere. Regeni disappeared from the street on a day Cairo was littered with security personnel.

Be the details surrounding Regeni's death as they may, he is still our messiah with his murder getting the world talking about so many other violations that we are sure happened at the hands of Egyptian security personnel: The 533 enforced disappearance cases that occurred in Egypt in the past eight months and the 396 cases that are still unaccounted for, according to Italy's Corriere Della Serra newspaper. The extrajudicial killings, including the killing of the five men whom the interior ministry scapegoated under the pretext that they were gangsters who allegedly killed Regeni. The extended pre-trial detention. The torture of detainees and suspects. The hundreds who got killed for a protest camp to be dispersed, and the 37 who were tear-gassed to death inside a small police truck on one of Cairo's hot summer days.

Regeni got the world asking with us questions that they had deliberately or obliviously ignored before his death: What happened to the Italian student who went missing in Cairo after heading for the metro station? How about the Egyptian video editor who went to buy food and never returned (Mostafa Massouny is his name and it has been eight months)? Where is the engineering student who was taken from outside his college and never showed up again? Where are the others? And why has Italy, Egypt's significant trading partner and good friend, never threatened to take "immediate" measures against the Egyptian government for their sake?

He exposed the hypocrisy of Western politicians who remained silent about cases of torture and enforced disappearance for more than two years; then they spoke out only when an Italian led a similar fate. What is the value of the trade and investment deals that Italy and other Western countries have stuck with Egypt? More valuable than the lives, safety and freedoms of innocents? More questions that Regeni forced us to ask.

Regeni revived solidarity among people who reject injustice and oppression. We learnt in the early months of 2011 that the secret to ordinary people's triumph over tyrants is the moment they realize that they are united for one cause - then they become no longer ordinary.

And here we are reckoning that Regeni's enforced disappearance, torture and murder constitute "non è caso isolato" (no isolated case), as Regeni's mother Paola Regeni said in a press conference in late March.

Her son has become an icon just like Khaled Said, who was 28 like Regeni and who was tortured to death at the hands of Egyptian policemen in 2010. A Facebook page set up in his memory called for the January protests of 2011, united Egyptians, and sparked a revolution. Paola has become "a mother of a martyr" like Khaled Said's mother and like many mothers of "martyrs" whom we honor - because her son was "killed like an Egyptian."

While an Egyptian official delegation is now in Rome to present Cairo's findings regarding Regeni's case, many Egyptians are in a state of confusion and uncertainty.

Regeni's death has not resurrected the unfinished Egyptian revolution or pushed politicians to suddenly start caring about the rights and values that they actually care little about. But his death has resurrected solidarity among those who oppose oppression and violations in Egypt and elsewhere. This solidarity, and the collective sense of agency accompanying it, should not be taken lightly.