Mike Ragogna: Taylor, it's been an exciting day for you and your brothers.

Taylor Hanson: Well, today is kind of a busy one for us. For months, we have been planning the release of a new single called "Give A Little." A couple weeks ago, our schedule and trajectory was affected around the world as they heard about the tragedies in Japan. We stirred up an all day, live streaming event when we were at the SXSW music festival. We created this all day set of sessions where people came and performed from all over the music world and used that as a way for people to donate to the Red Cross. That happened on the 17th. It was one of those things that was a crazy crunch we felt like, "How do we pull something together?" It happened we had over 40 artists there from Widespread Panic to Michael Stipe to Ben Folds to Boxer Rebellion, and so many great bands. So, today, we planned on doing one more re-stream of the whole day. So, right now, it's streaming all day, and it's on AOL and Myspace, so people can tune in. The whole thing is to try and encourage people to donate and encourage music fans to stay focused on everything in Japan. The other thing is that there is a benefit album. We've collected an album based on all of the performances--it's 47 songs and Amazon has given us some specific promotion and is really trying to encourage people to donate. They've made it a charitable product, so all of the proceeds are going to the cause. There is just a lot happening.

MR: The turnout for this year's SXSW was insane. You couldn't turn a corner without hearing a band you wanted to see. To be able to do a charitable event at SXSW under those circumstances is definitely a challenge.

TH: Obviously, a lot of people knew and were talking about the issue in Japan, but I think at SXSW, everybody is in their own bubble. We looked around and thought, "Oh my God, there are so many bands. How often do we have all of these people and all of our friends are in the same city?" It's actually easier to pull something off if we can. We got a lot of support from SXSW and SXSW Cares, which is their nonprofit thing on the side. A lot of people came to the ball game. Talking about charitable things, I don't want it to seem like we're serial charitable guys jumping on causes here and there. I think you have to be willing to respond, and that's all we've been trying to do. Sometimes, you have to be willing to put your hand up and say, "Hey, shouldn't we be doing this?" A lot of people respond when you can see a clear mission and focus.

MR: It's good to keep your eye on the ball of what's needed.

TH: Yeah, we're proud that part of what we do as a band is that, at times, we get a chance to highlight human issues, also talk about life, not just from the point of view of we are on stage and we have fans and talk to fans and encourage people to share. We like to see it as we are all human beings, whether you are a fan or an artist, wherever you're at. We are all in this thing together, so it's good to get to share that with fans, especially that have shown support for years.

MR: For your new single "Give A Little," you had a friend or two do some remixes.

TH: The song "Give A Little" is pretty rhythmic, it's a '60s sort of pop song. We always thought it had the ability to get remixed or turned upside down a little bit. So Rac, who's real name is Andre Allen, is out of Portland and does a bunch of underground dance stuff. Questlove from The Roots is renowned for his work on many different projects over the years, as well as being a part of The Roots. We actually meat Questlove a year ago when we were on Jimmy Fallon's show and we just hit it off. We talked music and talked about what was going on and asked him if he wanted to do a remix and if that made sense and he was into it. People can go on iTunes today and get the single as well as remixes. Also, there are a bunch of videos to correspond with the mixes, sort of alt versions of the song to match the vibe of the mixes. So, as a fan, it's a really robust package. It's $3 on iTunes and you get seven songs and different versions.

MR: The last time we spoke, we discussed your last album, Shout It Out, which still sports a lot of potential singles beyond what's been released. It still feels fresh.

TH: I mean, the album has been out since this last summer, but we want to take full advantage and maximize getting the word out. Also, not just throwing something out there and hoping it sticks--really spreading the word and doing cool things, finding ways to make exciting for fans. It's fresh and new as far as we're concerned. The way that makes it work is that you continue to do different things, you do projects where you do live recordings and songs. You get remixes by people like Questlove, you keep giving things that are genuinely interesting to do. I think it keeps the music fresh and keeps an album that was released 6 or 8 months ago feel brand new because people are discovering it every day.

MR: It used to be you would work an album for two to three singles and then let it die.

TH: Well, we're just trying to make the most of it and reach people. The album has been really well-received. We are a touring band, so touring constantly is important. Also, one of the things we are excited about is doing promotions outside of the U.S. this year, which is hard when you're touring a lot in the U.S. and when that's part of your core business. We will be in the U.K. doing this weeklong stint of shows, which is literally a handful of tickets away from being sold out. That's one of the kickoffs for the international release in the U.K. and Europe. We will then be in Brazil and a lot in America as well. (You) put the music first and cross your fingers that you can get successful enough that you can continue to do it.

MR: You've taken your careers into your own hands and that's applaudable, and you're selling these huge amounts of records by self-promoting. It seems like artists should be using you guys as the paradigm.

TH: What we've said is if you're really passionate about the music, you will take on the business so you can make the music you want--not in a way that's like I'm going to sit alone in my closet and be artist and make art for the sake of it, just understanding that you kind of have to know what your business is to save the art, which is kind of the irony. I will say that if people want to follow the Hanson model, you need to not like sleep very much and you need to be really comfortable right on the edge of, "Are we going to loose our shirts?" or "Are we going to listen to the opinions that say this is too hard or this isn't plausible?" I think the truth is, every great business risk is a part of the game. I think in our business, a lot of people know that. I would say a lot of artists are already closer to taking risks. There are a lot more soon-to-be entrepreneurs from the artist world than some people might think. Risk is a part of the game if you're an artist.

MR: This is like advice to new artists, isn't it.

TH: A little bit, I try not to throw around advice too much. If you're willing to know your business, you can protect your art. That's the only way to keep what you do alive, by embracing that. You can't turn a blind eye and hope your handlers can help you out and make sure it works. You have to be right in there and know what's going on.

MR: Okay, you're just about to jump on stage for a soundcheck, aren't you.

TH: Yeah, we are here at The Jimmy Kimmel Show, so yeah.

MR: All of the best and thanks for the time.

TH: Thanks so much for the talk and spread the word about the Japanese relief project. If people want to go get the Hanson single, they should know that it's also supporting that same cause. It's a little shameless self-promotion.

MR: Not exactly shameless self-promotion, Taylor. Have a great show. 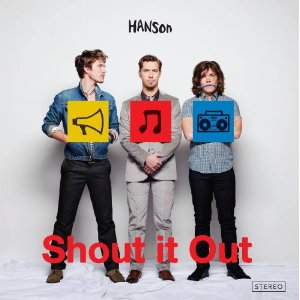 Nine Inch Nails has announced a collaboration with Case-Mate for a line of iPhone cases through the I Make My Case program. The line will be a retrospective of the band's career with all art curated by Rob Sheridan, NIN's art director. A new case will be released each week and the line will culminate with a customizable case where fans can mix and max imaging to make their own unique case. Case-Mate's "I Make My Case" line also includes customizable designs from artists including No Doubt, Metric, Underworld, HEALTH and Yo Gabba Gabba.