A young boy with autism climbs on the school bus in the morning. He realizes there is a substitute bus driver, and he backs down the steps. Two people hook under his arms and "help" him onto the bus. His body stiffens. He does not like to be grabbed unexpectedly. (Who does?) As he is ushered to a seat on the bus, the bus driver ruffles his hair and says, "See, it's not so bad!" The boy screams and arches his back. Having his hair touched by a stranger surprises him and the unfamiliar, loud voice pierces his ears.

When he reaches school, he goes into his classroom. In the morning rush, there was no time for breakfast. He puts down his backpack and walks to the snack cabinet. His teacher says, "Snack time is later. Sit down please." He drops to the floor in tears, vocalizing vowel sounds that no one understands. He has the words and knows what he wants to say, but his neurological system blocks the coordination needed for him to form and organize the words into speech.

He hears the aide say, "I don't know what his problem is. He's been acting like that all morning. I wish he'd be quiet and pleasant like her." She gestures to the other side of the room.

Across the room, a young girl sits with nerves and muscles that refuse to cooperate enough to prevent drool from running down her chin. They also prohibit the coordination and movement necessary for speech. So she sits with thoughts, ideas, opinions and language -- beautiful, eloquent language -- racing through her mind, but no one else can hear her voice.

Give me a voice, and I will show you my soul.

As speech-language pathologists, my colleague, Renee Collender and I see students with CCN daily. We worked with them using Augmentative and Alternative Communication (AAC), which allows people who can not talk to push buttons on a screen, combine words and say whatever they want. The problem is that traditional devices for ambulatory users cost $8,000.00, so some of the students who could benefit from AAC were prohibited by the cost. When the iPad was invented, we saw an opportunity to create a language system that would allow people to use the iPad as a communication device. We created the Speak for Yourself AAC app, which provides a financially accessible, clinically sound option to the general public. Our dream remains to change the world -- one voice at a time. For some, it has done just that.

The exciting thing about working with AAC is that some of the students begin to develop verbal speech! Even if they are not able to speak verbally, AAC gives students access to language. AAC gives students the ability to tell us that they like vanilla cookies instead of chocolate, are fascinated by weather or holidays, or that they have not eaten breakfast that morning. Children have the ability to tell us that they are afraid of their teacher, other students and loud toys. They tell us that they miss their dad, that their mom likes to drink wine and that they want to be a mechanic when they grow up. They can express their dreams, fears, ideas, thoughts, wants, needs, feelings and intelligence. And we love to listen because we look in their eyes and know that if they have a voice, they will show us their soul. 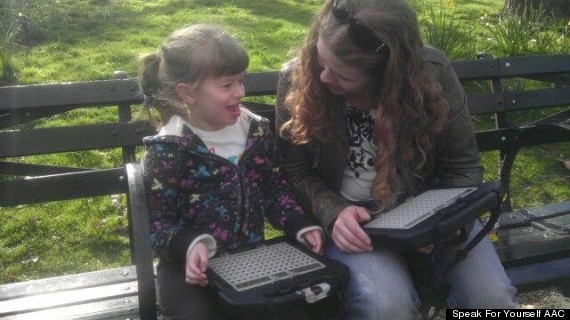 Heidi chats with 5-year-old Maya Nieder using Speak for Yourself.

Speech Language Pathologist, Co-Creator of Speak for Yourself AAC app