Here are the reasons why.

I have started a personal campaign, not to be mixed up with the recent U.S. presidential campaign, of penning handwritten letters to people I love who have made an impact on my life. It fell out of my head that folks don't do this sort of thing anymore, and, they should. 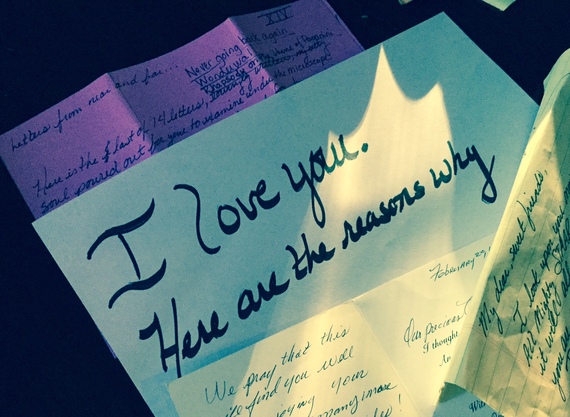 Consider it a Thanksgiving to all the folks in your life who aren't a turkey, and that lasts longer than a day, if that helps. You won't gain any pumpkin pie weight from it either.

Folks have all kinds of angst related to the recent election. It would do us some good, I think, to disengage for a little while and think of someone whom we love and tell them so, in a slow, well-thought out way.

Writing is scientifically proven to be therapeutic, even if it is just for ourselves.

Artist, Vincent van Gogh, wrote more than 600 letters to his brother, Theo, about his art and life. Letters provide insight to a soul, sometimes.

The handwritten word is becoming antiquated and lost in society. I don't know anyone who can read the Declaration of Independence in its true form seamlessly.

I have few students who can read or write in cursive. To be facetious, I write my students a letter in cursive and instruct them not to open it until they graduate from high school. The swirly cursive they see will be an enigma, of the Enigma, in today's electronic age.

Handwriting is becoming an art form. Letters Live, where famous people read other monumental folks' letters before live audiences, has embraced this beautifully.

Our societal craving for instant gratification through text, email, social media, emoji, and our limit of characters is limiting our character in some ways.

Think about it. The letter would only take about one episode of Walking Dead to write, and the title would be Writing Alive - without a cliffhanger and all the gore.

When was the last time you checked your snail mail and received a handwritten letter with true meaning, and not just a bill or a "respond immediately because you have won!" Or, the junk that clutters the inbox, and the mailbox. And, I ain't talking about a card from grandma that was bought in a store and signed with a few lines and a $5 check.

I am talking about a true, one to three page handwritten letter telling you how meaningful you are to someone. Doesn't that sound great?

"A letter is in fact the only device for combining solitude and good company," wrote famous historian Jacques Barzun when introducing, "The Selected Letters of Lord Byron," a collection which Barzun edited.

When I decided to start my recent letter-writing campaign, I thought of my father. He had the most beautiful handwriting. I keep every letter that he ever wrote to me. There are five. He's been gone more than 20 years, but I read them and know how meaningful they are. I see his perfect strokes of a pen and know he sat somewhere alone, thought, and took the time to write me.

I sat at my kitchen table late at night and in coffee shops over a period of months, writing 14 handwritten letters to try to save my marriage and many letters on my matrimonial tour. They didn't work. So, I started writing for me again, and started an AcidNeutral blog.

But I reflect on the wife writing and know my thoughts were true, well-thought out, sincere down to the color of paper I chose and the envelopes. Now, I write letters and notes to my children and many others.

You have to think in detail when you write. It's not a series of keyboard strokes and a send button.

It brings me joy to write these letters because I think so often we forget the fleeting snapshots of people who impact our lives. We go through life without telling people how meaningful they are.

Here is a very intimate way to tell them.

Emails and texts you delete. Letters you keep.

Why not write one and see if one comes back to you. If not, you will know that you have said all you need to say in a very real way that will always be remembered, even if not by the person you wrote, but by you.

(Enriching music: Sit Right Down and Write Myself a Letter, Nat King Cole; Word Up, Cameo)

More:
divorcevincent van goghLovelettersfriendship
Newsletter Sign Up
A weekly guide to improving all of the relationships in your life
Subscribe to HuffPost’s relationships email
Successfully Subscribed!
Realness delivered to your inbox

I am a mama, science teacher, writer, and artist. I do not collect spoons or ceramic cats.