Despite what some people think, storytelling is very much an acquired skill. Not everyone does a good job of it. Some folks are incapable of even launching a narrative.

How one develops a story and delivers it to an audience are key components to its dramatic success. If a playwright is sure of his artistic vision and has complete artistic control over his product, there's a strong chance that he will be able to shape a compelling narrative.

When charismatic monologists such as Martin Dockery, Dan Hoyle, Mike Daisey and Ann Randolph perform their own material, audiences react with vociferous applause and laughter. Consider these clips of slam poet Taylor Mali performing at the Bowery Poetry Club and speaking to attendees at the 2013 Big Ideas Fest in Half Moon Bay, California.

When writing for the stage, a playwright has any number of tools at his disposal.

Two recent Bay area premieres demonstrated what can happen when carefully conceived evenings of storytelling fail to reach a critical temperature. While each play was obviously crafted with great care and love (and included very specific geographical references), in the final analysis these productions only earned an "E" for effort.

Many writers love to do research. Not only does it lead to new thoughts and discoveries, it offers their fertile minds plenty of chances to wallow in new possibilities. Too much research, however, can lead to a situation wherein a writer must choose which ideas and characters to cut from his narrative. In most cases, they end up being his most cherished material.

Commissioned by the Shotgun Players, Daylighting: The Berkeley Stories Project is the third installment in the Berkeley theatre company's Community Stories Project. Having relocated from San Francisco to Berkeley, playwright Dan Wolf and director Rebecca Novick were eager to explore the spirit of contemporary Berkeley and see how the city has changed in recent years.

Both artists spent three years collecting stories about Berkeley from its residents, using the story circle model developed by the Cornerstone Theatre Company as their technique for gathering material. As Novick explains:

"Dan had hundreds of hours of recordings, piles of notes, and more suggestions than he could handle. We began to wonder if this was a play at all. Was it a series of documentaries or just a project we could keep doing forever? How do you tell the story of a place? It turns out you can only do that by telling the story of a few people who live there." 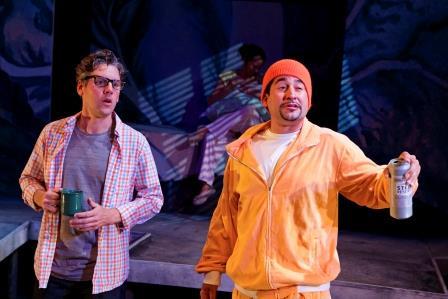 Tim Redmond (Tim) and Juan Amador (Neighbor)
in a scene from Daylighting (Photo by: Pak Han)

Identifying which stories have the most dramatic viability and trying to form them into a continuing narrative takes a great deal of skill and imagination. Wolf describes his inspiration for the play as follows:

"Daylighting is a love poem, a gut check, and a challenge that asks us: What is Berkeley today? Who lives here? Why did we come and why do we stay? How can the most progressive place on earth remain connected to the past without losing its way in the future?

The play started in the dirt in my backyard, between layers of sediment and weeds and fallen leaves. It came to me in the night, amidst the sounds of West Berkeley trains and thumping truck subwoofers. It emerged from the fog in the form of all the spirits that make this city special. As I crawled around on my hands and knees, pulling out the ivy that was invading my garden, the action of pulling the long vines got me thinking about all the people who had battled the ivy before me. It made me think about the native people who once worked this land and the Spanish settlers who came after them. About the creation of a city from two distinct communities and how those ghosts still haunt us today." 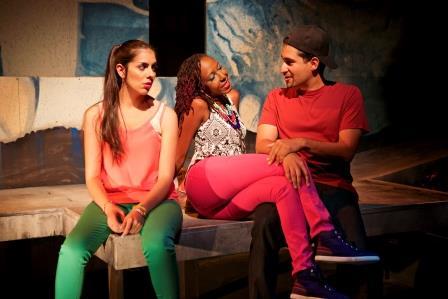 Unfortunately, the finished product feels less like a dramatic tapestry and more like a series of lamely strung-together vignettes that have been arranged like a carefully sorted pile of index cards. The protagonist is a young woman named Bee (Brit Frazier) who is graduating from high school and planning to leave for the East Coast (where she has a scholarship to attend NYU). Meanwhile, her grandfather, James (Donald Lacy), has seized the opportunity to sell his house while the market is strong.

As the play unfolds, the audience meets a variety of characters ranging from Bee's homeless, drug-addicted mother to her grandfather's new neighbors, Tim (Tim Redmond) and Celia (Karina Gutierrez); from old friends and acquaintances of her grandfather's -- such as his close confidante, Suzy (Mary Baird) - to Fred (Paul Loomis), a volatile former friend with whom James now refuses to speak. 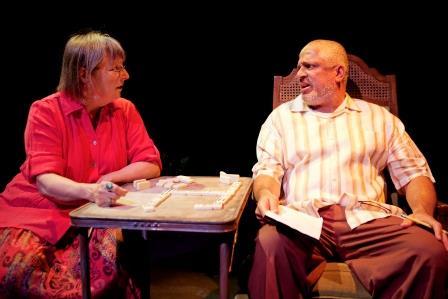 Mary Baird (Suzy) and Donald Lacey (James) in
a scene from Daylighting (Photo by: Pak Han)

Others in Shotgun's ensemble include Christina Chu and Megan Schirle. Abhi Kris has a nice scene as a cab driver who feels he must work night shifts in order to avoid bringing shame on his family.

While one can applaud Daylighting as a community outreach project, the sad truth is that Wolf's play lacks electricity. Its moments of urgency rarely ring true. Most of its characters seem as confused to have been dropped onstage as the audience that greets them. As I watched Daylighting, I often felt as if I was watching a grad student's unsuccessful attempt to create a local version of In The Heights.

Written by Philip Dawkins and directed by Jasson Minadakis, the Marin Theatre Company recently presented the West Coast premiere of Failure: A Love Story. In his production notes, Dawkins encourages stage directors to be as creative as they wish when casting his play.

"The chorus can take any number of shapes. Multiple people, one person, puppets... Make it as simple or complex as you see fit. Feel free to reassign some or all of the chorus' lines to other characters. You want the two dead parents to comprise the chorus? Go for it. You want a trio of hear-no/see-no/speak-no evil monkeys narrating the story? Rock on. It is possible to tell this story with as few as four actors or as many as fifty. So, have fun." 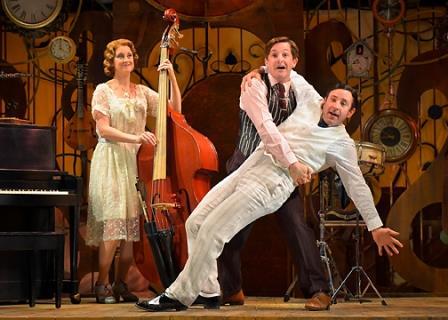 Megan Smith, Patrick Kelly Jones, and Brian Herndon in a
scene from Failure: A Love Story (Photo by: Kevin Berne)

An extremely high-spirited romp set in Chicago during the early 20th century, Failure: A Love Story is fairly bursting with moxie. Working on Nina Ball's intriguingly flexible set, MTC's ensemble sings, chirps, swims, dances, and hisses (isn't that what pythons do?) with a grand sense of determination and panache. From the outset, the audience is informed that two immigrants had their last name changed at Ellis Island, moved to Chicago, and set up a clock repair shop in the storefront below their apartment. When the couple drowned in a bizarre automobile accident, they left behind four children: 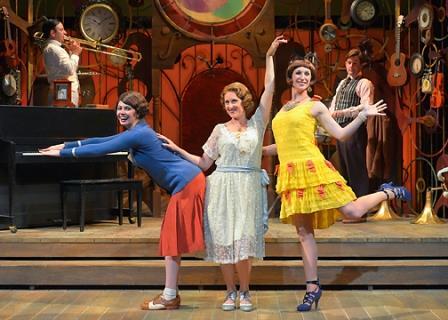 Never mind the fact that all three Fail sisters will die before the play ends, along with a pet python named Moses (who doesn't "supposes"). This cast of mildly crazed characters is eager to entertain you even if it kills them (which it does with an astonishingly high level of accuracy and a relentlessly jovial kind of satisfaction).

In his note from the artistic director, Minadakis explains that:

"Every so often, a play crosses my desk with language and imagery that so deeply connects with my imagination that the entire world of the play mushrooms into existence. Those plays are the plays that I fight to put on our stage (they are also plays that I try to direct). Failure: A Love Story is one of those plays. In the middle of my first reading, I knew I wanted to stage the play using actors who could both sing and play multiple instruments. I knew I needed our frequent collaborator, Chris Houston, to orchestrate arrangements for the songs listed in the play as well as compose additional music that would nearly turn our production into a musical. So much of what you will experience seemed to create itself. That's what great playwrights inspire: a blossoming of ideas." 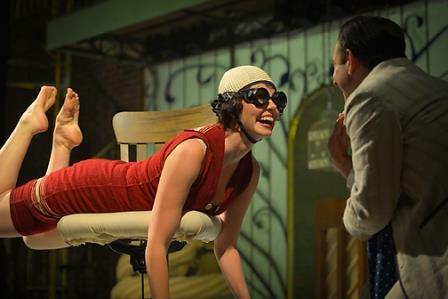 As Mortimer Mortimer (the man who serially and tragically falls in love with each of the Fail sisters), Brian Herndon has a jolly good time onstage. However, when faced with the unrelenting optimism of the Fail sisters (as opposed to Chekhov's gloomy trio), failure is never really an option. The play does, however, suffer from several peculiar problems.

Whether coping with a pair of green monk parakeets or trying to keep focused as the ensemble imitates the different clocks in the family shop that are simultaneously striking the hour, MTC's production of Failure: A Love Story offers up a dizzying amount of entertainment. There are times, however, when you might feel as if you've been trapped in a perverse Midwestern version of Disney's "It's A Small World" ride in which everyone kicks the bucket.