Imagine what would happen if a massive popular movement of ordinary Americans decided to voice their concern about military spending -- by withholding $10.40 from their 1040 tax forms this year? A simple, small, symbolic, but concrete gesture of protest to the $200,000 dollars a minute being spent on militarism while programs that support life go bankrupt. A few months ago I gathered in Lancaster, PA, with hundreds and hundreds of church leaders to ponder such a thing, a little project called 1040 For Peace. Many of the folks in attendance were from the Anabaptist "peace church" tradition of Christianity. Mennonites and Brethren, like the Amish, come from the Anabaptist movement, tracing back to the radical reformation of the 16th century. They, along with the Quakers are known for their commitment to peace, a simple way of life, and for their suspicion of power. They also have a history of war-tax resistance.

Money has power. And so withholding money has power too, especially when a bunch of people do it together. If one percent of U.S. taxpayers held back $10.40 as an act of respectful protest, that's nearly 1.5 million folks. Movements are like snowballs, they start small but get big pretty fast (as we can see in recent events in Wisconsin or the Egypt). And movements grow real fast in an age of Facebook... even the Mennonites are using the internet these days, albeit with a fair amount of caution.

As Christians, we have a particularly subversive example when it comes to economic imagination: Jesus himself. There are two occasions when he is interrogated by the authorities regarding taxes. On one occasion, he borrows a coin. (The fact that he did not have one is significant). He asks the interrogators whose image is on that coin, and then says "give to Caesar what is Caesar's" (Matthew 22:21). On the other occasion, he instructs the tax collectors to go catch a fish, and telling them the fish have a four-drachma coin in its mouth for them (Matthew 17:27). (Try that in April!)

Both of these stories are usually interpreted as proof that Christians must simply submit to the authorities, and give Caesar whatever he asks of us (notably with little regard of whether Caesar is a dictator or elected, evil or benevolent). But it seems Jesus has got something more clever up his sleeve.

In both instances, Jesus is asked a straight-forward, yes-or-no question: "Do you pay taxes?" In both cases, his response subverts the question, going deeper to challenge its basic assumptions. He doesn't dodge the questions; he transcends them. He forces his listeners, taxpayers and tax-collectors, to ponder. To what, exactly, does Caesar have a right? What has Caesar's image... and what has God's image? What is Caesar's, and what is God's?

I am particularly fond of the fish stunt. It is as though Jesus is winking at Caesar, saying, "Oh, Caesar can have his coins... I made the fish." Caesar can have his silly metals, after all he can keep making more of them even if they aren't worth a dime -- but coins have no life in them. Life is branded with the image of God -- and Caesar does not own that.

(No doubt there is much more to this interaction. Many of the coins had Caesar's image on them with the caption "Son of God", which was deeply problematic for Jews and Christians. Jesus continually challenges the ways we attribute to money God-like power. At one point Jesus even personifies money, giving it a name -- "Mammon"... and telling us we cannot serve both it and God. Things are more convoluted in our world where we try to make them one and the same, so our money says "In God we Trust" while our economy reeks of the seven deadly sins. When we can use "In God we Trust" bills to buy heroin, or pornography, or guns or bombs... we are in danger of taking God's name in vain. It would be more honest for our money to say, "In God we hope to trust" or "In God we sometimes trust." Otherwise, Jesus might look at Washington's face on the bill, and say "Send it back to Washington... ")

In a nation where such a high percentage of taxes go to military -- hence ultimately death-dealing -- pursuits, this teaching should give every tax-paying Christian long and troubled pause.

Catholic activist Dorothy Day posed the Christian dilemma like this: "Once we've given to God what's God's, there isn't much left for Caesar." She, too, was a war tax resister.

Just as Jesus does not answer the tax question by saying, "Yes, pay your taxes," it is also significant that neither does he say: "No, stick it to the Man. Don't pay them." He provokes a third way, an imaginative and prophetic path forward that is both respectful and revolutionary.

It's impossible to know exactly what Jesus would do if he lived in the U.S. of A, rather than first-century Rome... But I can't help but think he'd find a way to creatively critique the priorities of the empire in which we live, just as he critiqued the empire in which he lived. Rome and the U.S. share some things in common -- including that their biggest budget item is military spending. 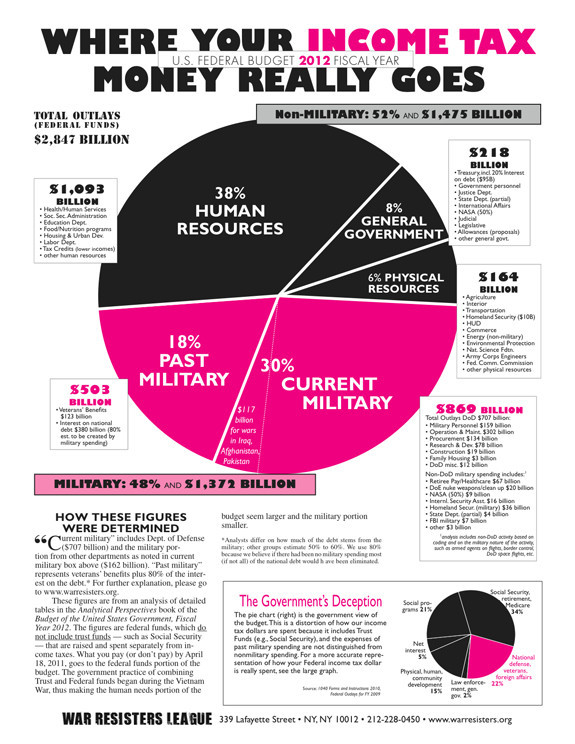 Deeply disturbed by the amount of money going toward weapons and military pursuits, many Christians and other people of conscience throughout history have been unable to support such war-making. They have reserved the right not to kill.

After all, for centuries Christians were jailed and even killed for refusing to make imperial sacrifices, and for refusing to kill for flags and idols, insisting that there is something worth dying for but nothing worth killing for. They refused to pledge allegiance to anything short of Christ. And they, like Jesus were accused of insurrection (Luke 23:2).

If Jesus and the Mennonites can teach us a little something here -- it is that we need imagination as we live in the empire. We are, in Jesus' words, to be as "shrewd as serpents and as innocent as doves".

Some of us will live below the taxable income so we don't even show up on Uncle Sam's radar. Others will withhold the portion of federal taxes that goes directly towards weapons and donate that money to a humanitarian group that is working for peace. Perhaps others will join the snowballing movement that shorts the 1040 tax bill by $10.40 as a coordinated prophetic stunt -- check out the website.

This tax season, may the God who brought money from the mouth of a fish guide us in revolutionary subordination to our own Caesars. Let us remember that there is a God that cares about life in an age of militarism. Let us all find a way to wink at Caesar.