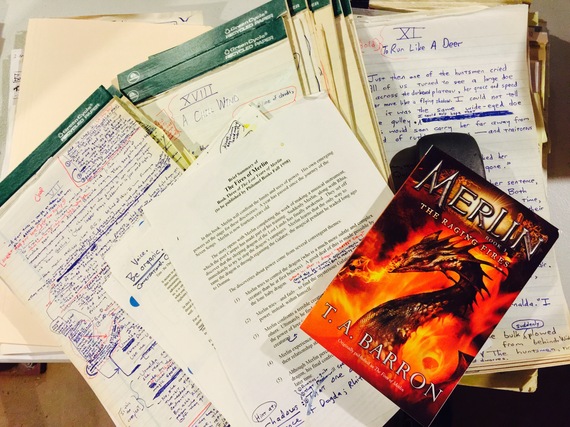 The very first time I hold a new book that I've written, I gently give it a loving hug...just as if it were a newborn baby.

And maybe, in a way, it is. For giving a new book to the world is the closest thing to delivering life that I will ever be able to do! (Though I've been lucky enough to watch all of our children born and to witness their first breaths...I was still just a cheering onlooker while my wife Currie did all the hard work.)

As parents, a big part of our job is to pay close attention to the young person in our midst, so we can develop an authentic sense of who he or she really is--and help that person become his or her best self. That requires more listening than talking, more appreciating than guiding (though all those are important).

That's not so different from crafting a story. I've learned that an outline is often helpful, giving me a logical sense of direction and a feeling for the arcs of the main characters. But once I've started writing, the balance shifts from the logical to the dreamlike, from the rational to the metaphorical. By then, listening to my developing story becomes more important than following my pre-conceived outline.

I start to ask my characters lots of questions--about their lives, their fears, their aspirations, and finally...their secrets. So with every new draft, I know them better and better. Since I always rewrite stories seven or eight times, by the end of the process, we know each other very well indeed. Serious jesters and unlikely heroes, complex evildoers and surprising friends--they are all my familiars.

So is the landscape of the imaginary world, which is truly another form of character. Places--to feel truly authentic--must reveal moods as well as mysteries, secrets as well as surprises. Like any human character, places are more complex and subtle than they may seem.

That's why, when I hold that new book for the first time...it really feels like a living being, something both wondrous and unique. Something whose first emergence I was lucky enough to witness. Something that's ready to enter the world and begin its own life journey.