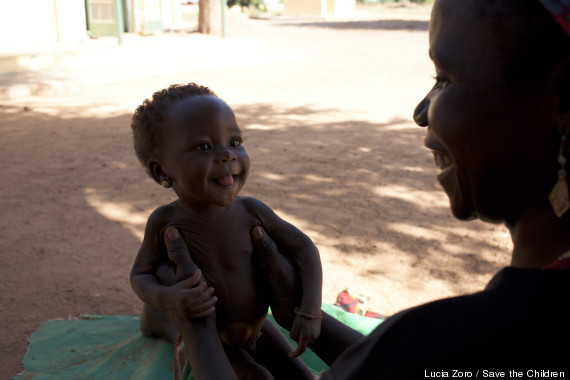 Rabia, seven months, enjoys a sachet of nutritional peanut paste with her mom, Laila. When Laila brought Rabia to this Save the Children-supported, government-run facility in northern Nigeria providing nutrition services, Rabia was too frail to be picked up -- her mother had to pick her up using a piece of cloth, like a stretcher. After two weeks in the clinic, Rabia is a picture of health.

In a rural village in northern Nigeria, a new mother named Laila is doing everything she can to care for her baby daughter, Rabia. But despite Laila's efforts, Rabia's future is not solely in her mother's hands. If Rabia was instead born to a wealthy family in Lagos, for example -- the largest city in Nigeria -- she would be nearly four times more likely to survive to see her fifth birthday.

This is the lottery of birth.

All over the world, children's chances of seeing their fifth birthday depend on where they are born, the wealth of their parents and their ethnic identity -- factors that, for them, are purely a matter of chance.

New research released today by Save the Children reveals a story of fast but unequal progress in child survival. Despite unprecedented global improvement in the past two decades, more than 75 percent of the 87 developing countries included in the study are seeing inequalities in child survival getting worse. The world's most disadvantaged children are being left at the back of the line.

If current trends continue, children drawing the shortest straw in this lottery of birth will continue to die from preventable causes for generations to come.

Giving every child a fair chance in life is a defining challenge for our generation, and it must be tackled head-on.

In September, when the UN is tasked with agreeing upon a post-2015 global development framework, leaders will have a critical opportunity to shift the global course of development, helping to ensure children are no longer left behind due to social, economic or geographic reasons. The new framework must aim to finish the job the MDGs started, putting the world on track to end preventable deaths -- and by 2030, no post-2015 target should be considered met unless it is met for all social and economic groups.

Beyond global and national leaders working to secure a post-2015 framework promoting equity at the core, we also need governments to implement policies and plans to proactively support this framework.

Civil societies, international agencies, development and corporate partners, and philanthropists also need to align behind these plans and offer their own contributions to help attain equitable progress.

For example, Save the Children's long-established partnership with Johnson & Johnson has saved countless newborns in Uganda and Malawi through the Helping Babies Breathe program, which has trained birth attendants on neonatal resuscitation for newborns.

Amidst this story of unequal progress, however, we have seen a glimmer of hope. Inequality is not rising in all countries. Some leading countries, such as Rwanda, Malawi, Mexico, Nepal and Bangladesh, have reduced child mortality at not only a fast rate, but also an equitable one, where the progress for more excluded groups has been faster than the average national progression.

These countries should be the yardsticks by which we measure, because Save the Children's research found that pursuing an equitable pathway to reducing child mortality is linked to faster overall progress. The countries that have improved equitably have, on average, progressed 6 percent faster over the course of a decade than those that have not.

By investing in disadvantaged children, like Rabia, now, we can change their futures, and ours.