For children who grow up facing adversity in their home, their path out is often lit by a teacher.

I have spent tens of thousands of hours interviewing and reading the stories of those who grew up facing adversity in their childhood home. So often, the child who grows up to become a resilient adult does so because a school teacher stepped in to help them unlearn a lie or a negative belief that they carried deep inside.

But far too often this happens randomly, almost by accident. The New York City Department of Education and New York City Mayor's Office to Combat Domestic Violence is working to make what is now random, predictable. 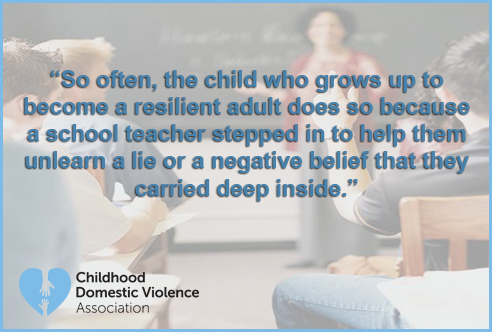 We know what makes a person resilient if they experienced adversity in their childhood home- that is when one caring adult -- The One -- steps in to help them see the truth that they can't see for themselves. By having this influential person in their life, they can begin to recognize that the negative beliefs they carry inside and the bad things they believe about themselves are lies.

Why do we believe these negative things about ourselves?

The brain's job is to find evidence of what it believes is true. So if you believe that you are a guilty, fearful, or shamed person early in life -- that there is something wrong with you -- the brain does its job and finds evidence as to why that belief is the truth.

For a person who grows up facing adversity in their childhood home, their environment gives them every reason to be fearful or to believe that there is something wrong with them and their brain is constantly seeking out evidence to prove these lies are the truth. By the time they are a teenager or young adult, those feelings become who they are.

The brain is doing its job and it will keep doing it for the rest of that person's life...unless they unlearn what was learned.

How can you unlearn?

In working with some of the leading researchers in the world to build the Change a Life online training program, it became exceedingly evident to me that one of the best ways to unlearn what was learned is to have a caring adult step in to help us see the truth that we cannot see clearly when we are young.

When that adult intervenes and shares words and actions that communicate things like, "I hear you, I believe you, you are not alone, I am sorry you are going through what you are going through, it's not your fault, it's never a child's job to control the actions of an adult," they have a powerfully positive impact on a young life that can help reshape their flawed belief system. As we come to see the lies for what they are and become aware of the truths, our brain responds and begins to "find evidence to believe what is true."

One adversity in particular has the lowest level of awareness -- Childhood Domestic Violence (CDV) -- which is when a child grows up living in a home with domestic violence. NYC is taking a meaningful first step towards putting the spotlight on this global issue with a new initiative being introduced later this year. I read about this pilot program in a recent article -- After, "having identified the neighborhoods with the most reported incidents of domestic violence, trainers will go into the local schools to help teachers spot clues that students might have been exposed to violence, understand how that can affect students, and know what resources are available to them."

As I mentioned to the reporter in the same article, I applaud the effort -- "This is a significant issue that has no awareness," said Brian F. Martin, founder and CEO of the nonprofit Children of Domestic Violence, which provided free training to several hundred education department employees last year. "If you grow up living with domestic violence, that's childhood domestic violence, and it has a massive impact on the life of that person."

What can you do?
Perhaps you see the brilliance in the insight that NYC is acting on and want to take action yourself. But what if you don't live in NYC? And even if you do, what if you don't fall within one of the districts where the pilot program is taking place?

I urge you to take a look at CDV's Change a Life program, which is endorsed by the U.S. Fund for UNICEF. It is the only online training program currently available that is proven effective to help guide, prepare and qualify an adult to step into the life of someone who grew up facing adversity in their childhood home. It's free, takes only 30 minutes, and lists easy steps for an adult to help a child unlearn what was learned so they can live a happier and more fulfilling life.

The results of a two-year study where the Change a Life program was proven effective were just presented at the Association for Psychological Science (APS) Convention this week. The study showed that Change a Life can be a powerful tool to help caring adults positively affect the lives of children who grow up living with adversity in their home.

Let's work together to provide teachers with the necessary tools to help change a life. They already care quite deeply -- now they just need to learn the best words and actions to help address a subject that is not easy to talk about, but by doing so can help millions nationwide.