"Stephanie Lee is a thirty-six year old Iraq-war widow with two children who has been diagnosed with terminal colon cancer."

Those are the opening lines in a Pay it Forward campaign with a goal of raising funds to help support Stephanie and her two children. They are not lines that inspire hope, but Stephanie Lee is the most inspiring and hopeful woman I've ever known. That's saying a lot considering that my wife has beat cancer twice and constantly amazes me at how she came through both battles stronger and more able to change the world and those around her for the better.

Christy wasn't dealing with stage 4 colon and liver cancer, but she and Stephanie both belong to a high-dollar, semi-private organization known as The Cancer Club. Your mom or your sister may also belong. Or your dad. Or you. In that case, you are also a member of The Cancer Club. One way or another, almost all of us are.

The odds were stacked against Stephanie, who I know only through a friend, and through an amazing story in the December issue of Esquire Magazine, Patient Zero, by Tom Junod and Mark Warren. This is a fine piece of journalism that I highly recommend to every member of The Cancer Club.

It tells the unlikely story of the meeting of two great people with a common purpose: Stephanie Lee, Iraqi War widow, Hurricane Katrina survivor, cancer fighter; and Eric Schadt, a "big math" genius and founder of the Icahn Institute at the Icahn School of Medicine at Mount Sinai. 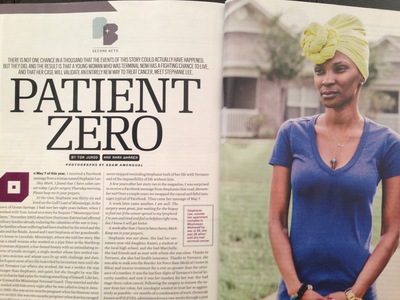 Due to the happy circumstance that both Eric and Stephanie had previously been profiled in Esquire (for very different reasons), Stephanie Lee's cancer is now one of the most closely studied cancers in history. Her cell mutations have been analyzed by supercomputers and studied by a very big team of math, data and oncology whizzes. Her tumor has been grown in a fly and treated successfully. Her 40% chance of living just five years has been given a hopeful reprieve, and her standard of care medical regimen of surgery, surgery and chemo, chemo and more chemo have a back-up plan that could help the daughter of Stephanie and Terence Lee graduate from college.

Cancer treatment can be depressing business. Those with cancer want to be healed - they want it out of their bodies - but cancer doctors are often stuck with the modest goal of extending their patient's lives for a few years, or a few months. Stephanie and Eric's story is a step in a new and hopeful direction for all of us who have been impacted by this terrible scourge.

Stephanie Lee is a remarkable woman who doesn't believe something until she sees it. Eric Schadt is a mathematician and computational biologist with a deep belief and big funding for the possibility of a better way to treat cancer. Mark Warren and Tom Junod are writers who know that stories are real and that words can celebrate, change and save lives.

This Thanksgiving, I am giving thanks for their contributions to ending The Cancer Club forever.

And please support (and spread the word) on the Pay it Forward Campaign to help support Stephanie and her family and to contribute toward her daughters' future education.

Have a Happy Thanksgiving, one and all! We will at our house. Here's Christy a few years ago. And here she is at our oldest daughter's graduation. (Stephanie, I hope this will make you smile.) 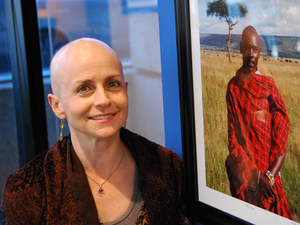 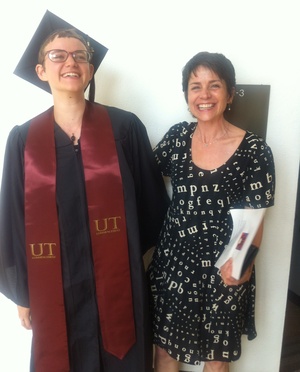