I once lived near a wood haunted by the Devil.

I was twelve or so, I think, and my brother was eight. Something black and strange lived in the thicket, something with red eyes. Later years taught me to speculate: perhaps it was a bear, or a large dog, or a trick of the light. What remains quite clear, however, is the experience of fear in its purest form--a nameless horror that left a gaping hole of ragged terror behind. I've since come to expect the Devil to walk on human feet, and yet the worst of humanity's offenders will undoubtedly vibrate with the same all-consuming dread. Now, thanks to Alex Grecian's latest book, I know exactly what to call him. He answers to Jack.

The Devil's Workshop is the third installment of Grecian's Murder Squad series. Our favorite detectives, Walter Day and Nevil Hammersmith, reprise their roles as London's best men (and possible its only good ones). The brilliant Dr. Kingsley and his daughter Fiona also return, mostly in their attempts to help a very pregnant Claire Day through a Victorian woman's most dangerous employment: giving birth.

What does it mean, to bring new life into the world? Midwives had been largely supplanted by male practitioners, and by the latter nineteenth century, physicians routinely delivered babies with the aid of forceps (and chloroform). Numerous advances had been made, but it remained a time of great risk to mother and child. The line between life and death converge at birth, and The Devil's Workshop unfolds in time to the rhythm of Claire's ordeal. After all, there is more than one creature struggling to be born of blood in this dark tale.

Beginning with possibly the most mind-bending of prison-breaks, Grecian's book unfolds along three separate tracks. The reader finds herself plunged first into the dim recesses of a disturbed mind, itself imprisoned in the dark belly of London's underground. Then, we are caught up in the desperate manhunt for London's most wicked and violent as they taste the free air, finding that at least one of them is most unfortunately familiar. He has unfinished business with Walter Day--and with his wife, vulnerable as she is. Now is clearly not the time to be giving birth, but as the story so well illustrates, babies come when they want. Even when something else, something dark, has likewise been reborn into London. Who is it that stalks this story, speaking with such a silver tongue (and wielding such silver instruments)? The Devil has been very busy, indeed, but in this shadowy tale of mistrust and missed opportunity, there are scarcely any but devils among us.

Grecian has a remarkable way of pulling the reader in and down, into the swirling dark. Unlike the previous two books, however, this third installment is more adventure than mystery--or rather, the mystery that begins here has most assuredly not been concluded. I left The Devil's Workshop on the razor-edge of anticipation; I must know what comes next! We do not merely read Grecian's books; we participate in them. In the end, we emerge from this tale dazed and awed, as though we, too, have been toiling in the black womb of London's underground. We have glimpsed as through a mirror darkly the bloom of evil, the birth of destruction. We have met the Devil. 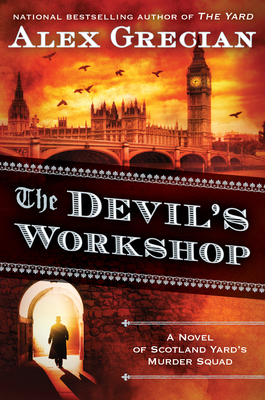