The attention around #GivingTuesday 2015 reached record levels and online giving grew 52% compared to 2014. Blackbaud processed more than $39.6 million in online donations on #GivingTuesday 2015 and this surpassed all prior years since the movement began in 2012. 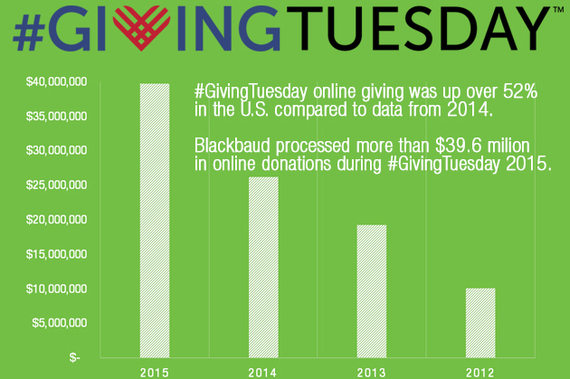 The growth in #GivingTuesday not only shows the momentum of the movement, but also the key role digital technology plays in helping donors contribute to the causes that matter most to them. #GivingTuesday 2015 certainly reinforced the power of engaging donors across traditional, online, and mobile channels.

It is also worth noting that the average online gift amount increased by 6% to $137 per online donation. Online donations tend to be larger than traditional direct mail gifts and #GivingTuesday donors also show this behavior. Blackbaud also tracked a significant number of online donations over $1,000 on #GivingTuesday 2015. This includes several $50,000 online donations made during the day. This continues a trend that Blackbaud has seen for years as affluent donors choose to give online in great numbers.

We know that consumer adoption of mobile devices has skyrocketed in recent years. Consumer behavior is changing donor behavior and #GivingTuesday is just one more example of this trend. Last year, about 13% of #GivingTuesday donations were made on a mobile device. In 2015, that jumped to 17% of those digital donations coming from mobile donors.

In just a few short years, #GivingTuesday has become a global movement. It has also meant that nonprofits of all sizes have been able to increase their year-end fundraising results. The data from 2015 is still new and there's no doubt that additional insights will be gained from analyzing it more in the future.