Dear anonymous crew of techie/thugs who brought Gizoogle back from the dead:

We thank yo' collective ass!

The beloved Snoop Dogg translator/search engine was just resurrected by an anonymous group of Gizooglers who have spent a ton of time working on more than 4,000 "gangsta" translations and tweaking their algorithm. And we salute them!

Founded by a Snoop lover named John Beatty in 2005, the site has been dark since 2011. Snoop has since changed his named to Snoop Lion, of course.

The site, which is "Fo' all y'all biotches who wanna find shiznit!" is easy to use: Just type something below the spinning rims, lay back and let Gizoogle do the work. It's downright hilarious. Try looking up "thank you" to find a somewhat NSFW result. Gizoogle isn't into politeness. Search yo' name! We tried searching "HuffPost Tech" and here's what we got: 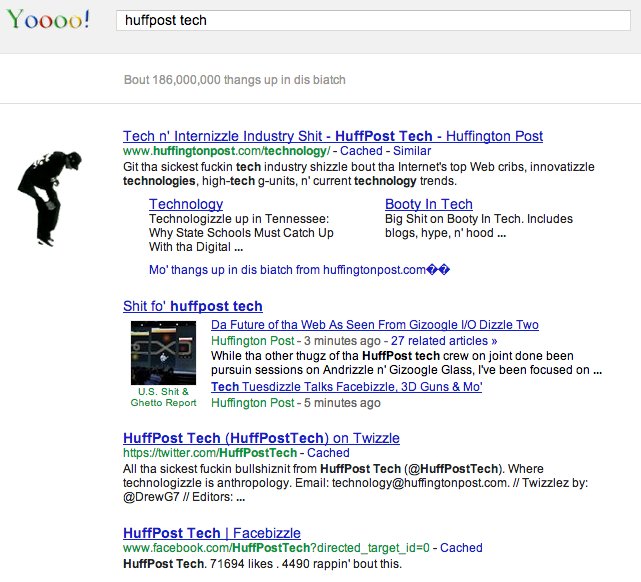 CORRECTION: A previous version of this article swapped the number of "translations" the team has done for the amount of time in hours the team has invested in the project.

Gizoogle, The Snoop Search Engine, Is Back! (NSFW)
Google Easter Eggs
1 / 12
Let It Snow
When you type "let it snow" into the search bar, Google sends a shower of snowflakes down your screen. But watch out! It gets frosty fast. If that happens, just use your cursor like an ice scraper or click "defrost." It's a good way to prepare for those frosty mornings in the car.