NASA's Mars Reconnaissance Orbiter has circled the Red Planet more than 40,000 times since arriving there in 2006. During that time, the spacecraft has spied everything from avalanches to dust devils to buried glaciers.

And now, for the first time ever, it has detected deposits of glass nestled in impact craters on the Martian surface. The finding may have important implications for the search for ancient life on Mars.

"In the past the search for life focused on 'following the water,' and looking for sedimentary rocks formed in lake or river environments," Kevin Cannon, a Ph.D. student at Brown University in Providence, R.I. and one of the researchers involved in the discovery, told The Huffington Post in an email. "Now there's another possible preservation mechanism that could be equally as promising."

The researchers aren't the only ones crowing about the find. As Bill Nye, "The Science Guy" and CEO of The Planetary Society, told The Huffington Post in an email, "This discovery could change the world."

"If we are able to return a sample of impact glasses from Mars, and they prove to have signatures of organic molecules or life, it would motivate humankind to explore Mars in ernest, allocating more resources to the effort and engaging citizens around the world," Nye said in the email. "If we were to prove that there were or even are living things on Mars, it would change how every person Earth feels about what it means to be alive in the cosmos. It would be akin to the discoveries made by Copernicus and Galileo." 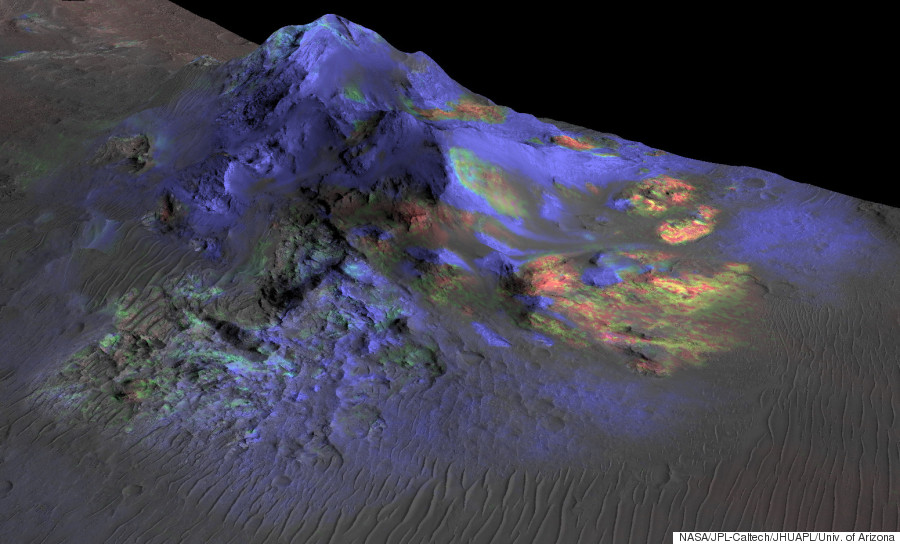 Researchers have found deposits of impact glass (in green) preserved in Martian craters, including Alga Crater, shown here. The detection is based on data from the Compact Reconnaissance Imaging Spectrometer for Mars (CRISM) instrument on NASA's Mars Reconnaissance Orbiter.

Research has shown that bits of plant life were preserved in impact glass on Earth -- sort of like how insects get trapped in amber -- as comets and asteroids struck our planet near what is now Argentina millions of years ago. This gave researchers the idea of looking for similar deposits on Mars.

"Billions of years ago, when microbial life may have littered the Red Planet, the occasional meteor impact could accidentally encase bits and pieces of this ancient biology in glassy packaging," Dr. Seth Shostak, senior astronomer at the SETI Institute in Mountain View, Calif., who was not involved in the research, told The Huffington Post in an email. "So if you're going to look for life that's been gone for billions of years, this suggests that a promising way to do so is to simply find it lying around, conveniently bottled."

To figure out how to find the Martian glass deposits, Cannon and co-author Jack Mustard, a professor of earth, environmental and planetary sciences at Brown, first conducted a simple experiment in their laboratory.

They mixed together powders containing compounds similar to those known to exist on Mars, and heated them in an oven to produce glass. Then they measured the spectra of light reflected by the resulting glass -- and looked for similar signals in the orbiter's imaging data.

“The researchers’ analysis suggests glass deposits are relatively common impact features on Mars,” Jim Green, director of NASA’s planetary science division at the agency’s headquarters in Washington, D.C., said in a written statement. “These areas could be targets for future exploration as our robotic scientific explorers pave the way on the journey to Mars with humans in the 2030s.”

One glass-containing crater of particular interest is called Hargraves. It's located in a region that once contained warm vents, and was likely hospitable for life -- and it's being considered as a possible landing site for NASA's Mars 2020 rover.

The research was published online in the journal Geology on Jun 5, 2015.