Google Glass, not the only, but certainly the most popular of the all the wearable headwear technologies available today, has become a lightning rod for the battle of how the next generation of computing power will be used.

The battlefields are many. First there's the battle for common courtesy. Wearing a video camera on your head asks you to redefine etiquette: Where is it appropriate; when should you ask permission? Second is the war on private space. Since all you need to record your world through Google Glass is to tap your head or whisper "OK Glass, record video," you can violate any person's private space, any time. For the most part, your victims stay clueless. The third battle is class/glass warfare. By design, Google Glass has come to represent a technophile's status symbol, an elite club (way less than 1 percent) of the truly connected.

How do I know? I've been wearing Glass for a few months now. Motivated by curiosity, not religion, I'm part of the elite club of 10,000 or so who paid $1,500 for the privilege of exploration. I've filmed religious ceremonies where no cameras were allowed. I've got photos of tipsy colleagues. I've snapped, tapped and captured at airport security and even took a series of "unsuspecting" subjects on the subways of NY. All the while Google monitors my glasses, even tagging my photos with #throughglass, so I can advertise my elite status to the world.

Even when I'm not secretive -- like standing in front of a room delivering a speech -- some people tell me that when I wear my Glass I creep them out. They fear "what I could be doing." Rather than feeling all powerful or super cool, my secret life behind Glass makes me feel a little slimy, but also rather grave. Donning Glass and heading out in the streets is serious stuff, not to be taken lightly. To borrow a bit of Dickens, when I step out in my Glass, I'm like the high-tech equivalent of the Ghost of Christmas Yet to Come. 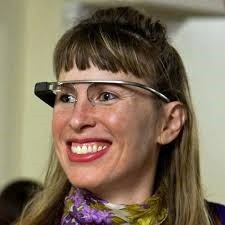 Last month, Glass Warfare had its first poster child (not a particularly good augur, either). Sarah Slocum (pictured above), a thirty-something from Silicon Valley, had her 15 minutes of fame when she entered a San Francisco bar wearing her Google Glass. After a few patrons grew angry about her Glass antics (hard to say whether class warfare or invasion of privacy were the catalysts), a row ensued. Slocum had her purse stolen, her glasses grabbed from her face, and an issue that pushed her onto CNN.

Rather than skulk away from her brush with the non-Glass class, Sarah chose to make Glass her battle cry. I will hand it to her, she was both feisty and technically adept. She managed to create several telltale videos with her Glass while she was being verbally and physically assaulted by bar patrons. Only problem? Glass recorded both sides. She sounds like an ordained chosen person with a potty mouth. Google, has, by dint of its pay-to-club membership, created the situation.

Soon after the Slocum incident, a post on the Google Glass website made it clear that at least in Google's view, people, not Glass, are the problem. The blog was ostensibly written to debunk the Top 10 Google Glass myths.

While most of the Google Glass experience involves receiving information from friends, news, and maps, the ability to surreptitiously take video and photos are undoubtedly Google's most controversial features. They are also, at least for the moment, the killer app.

Gary Shteyngart, writing in the New Yorker, reported on the Glass backlash.

Casinos in Las Vegas have banned Glass, for obvious reasons; bars and other public establishments may follow suit. The actress Liv Tyler was reportedly incensed when she thought a Glass wearer was filming her at a fashion show. On the other hand, the day I arrived at Basecamp (Google's Glass dispensary) the staff was abuzz about the TV actress Alyssa Milano stopping by for her Glass. But when I tried to get my friend Christine to see the James Turrell exhibit from her desktop, a tech-savvy Guggenheim guard on the museum's first ramp shouted, "No recording!"

We're all accustomed to the brandishing of a cell phone or camera, but there's something sly about Glass's photo log. As business establishments, schools, planes, trains and automobiles decide whether they'll allow Glass or not, the few of us in the Glass-wearing minority should be debunking a few myths of our own. It starts with civility and recognition that when you're introducing a new technology you do it through education, not hostile takeover or "look at me." Glass warfare will abate only if the wearers stay sensitive to cultural issues (not everyone can spend $1,500 on a fad) and privacy issues. Try saying, "I'm wearing Glass, is it ok if I take your photo?" It may fend off the war.