Happy Friday, Gleeks! It's that time of the week again -- all of the songs from the anticipated "Michael" episode of "Glee" have been finally been released. We're really digging Mercedes (Amber Riley) and Sam's (Chord Overstreet) sweet "Human Nature" duet, and Artie (Kevin McHale) "Scream"-worthy track with Mike (Harry Shum Jr.).

"Black and White" is also a standout track, and surprisingly not one of the tracks that lead vocalist McHale pitched to Ryan Murphy and the writers. "There's a number that Harry and I are doing that we really fought for, so we were excited to do it," McHale told HuffPost TV in January. "'Black or White' is definitely another one that I was happy to do. Harry and I actually threw a few song ideas out there toward Ryan [Murphy] and the writers, and 'Black or White' wasn't one of them, so I'm so happy that they kind of didn't listen to us there and added that one."

Besides 10 Michael Jackson classics, what can viewers expect from the upcoming "Michael" episode? Expect a showdown between Sebastian and Blaine (Darren Criss), while Finn's (Cory Monteith) proposal to Rachel (Lea Michele) is still up in the air. Will Rachel say yes? The cast isn't spilling any secrets, but we do know that the "Glee" lovebirds will sing Jackson's classic tune, "I Just Can’t Stop Loving You."

As for the New Directions' big stage performance of "Wanna Be Startin' Somethin'" -- on which Blaine takes the lead -- the photos do offer a look at which Michael each of glee clubbers is dressing as: McHale, told HuffPost TV that the red leather "Thriller" jacket was bestowed upon him while Brittany got tied up in a "Bad" costume.

"The one number we did where everybody wore a different Michael outfit was just incredible. It was like everybody liked somebody else's more than their own," McHale said. "We had no idea what everybody was going to wear until we got to set and were like, "Oh my god! Look at yours!' ... We were all just freaking out."

Listen to the music from "Michael" below. All of the music is also posted over at Glee the Music. 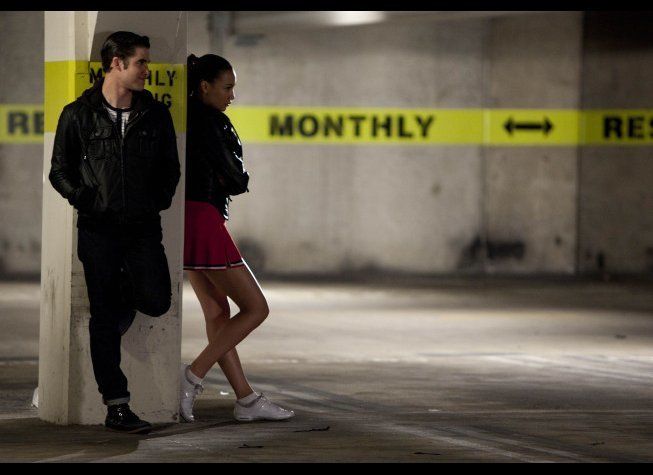