I probably would have just ignored the Rocky Horror episode of Glee the other night, if it weren't for the fact that Ryan Murphy, the creator of Glee, is being asked to direct the remake of The Rocky Horror Picture Show. While some of the changes I have previous written about were explained in the plot (doesn't let them off the hook but it's better than nothing), the fact is they went a lot further than necessary to take the sexiness out, de-queer Rocky Horror, throw around some casual trans- and fat-phobia, and completely miss the point of the original.

Adding insult to injury, the show, through several of its main characters, seemed to agree that boys wearing girls' clothing is just not appropriate for teens, which makes no sense at all in a show ostensibly about accepting people who are different, about outsiders coming together to celebrate their experiences. Instead, it seems like the show is more and more speaking through Sue Sylvester and hoping to send American back to the pre-1970's era mores Rocky Horror critiqued.

Oh, and they think slurs against transgender people are completely appropriate in a show that co-opts a play/movie about the world's favorite fictional transvestite.

Tranny is OK but Transsexual isn't?

I posted last week about the lyric changes in the Glee episode. They cleaned up some of the lyrics for a tween audience, but the cultural cache of the original Rocky Horror was the confrontation of two worlds — the po-dunk world of Denton High, that represented queer people's communities and families of origin, and the Transylvanians, who represented queer people's communities and families of choice — and the fact that the latter world wins because it corrupts the former. So cleaning up Rocky Horror just misses the point; it's supposed to be provocative.

And there should definitely be a problem with the word "tranny." (Follow that link to read why many people find that term offensive.) When Mike, who was supposed to play Frank N. Furter, drops out of the play, he says:

I really want to do it, but [my parents] are just not cool with me dressing up like a tranny.


I'm the last person who would advocate banning a word, any word, from TV. We have few enough and cleaning up art and reality for the comfortable consumption of others is maddening.

But consider the good press Glee got last year for its episode involving the word "faggot," where Finn called Kurt "faggy" and Kurt's dad gave a big speech on the word and homophobia. Gay bloggers loved it up and everyone sang kumbaya and learned a big lesson.

So what's up with just casually dropping the word "tranny" without any response at all? I plain don't buy that the creators of Glee are in the dark about that word, considering that they've already caused controversy with the word "she-male" and heard an earful about that and then decided to mingle brands with a movie/play known mainly for transvestitism.

Again, I'm not in favor of any word being banned. If it was a show that frequently used slurs to show the characters' roughness, that'd be one thing. If they used the word to discuss it, that'd be another. But it's Glee, all pixie stix and gum drops, that made a whole speech about not using the word faggot not too long ago, and they even decided to edit out the word transsexual.

Mercedes played Frank N. Furter, and while there's a neat little in-plot explanation about why a boy couldn't play that character (see above), we know that they just didn't have the balls to put a real sweet transvestite out there:

As for that other big Glee stunt episode, the Rocky Horror installment, which is set to air around Halloween, "I was initially going to do the Dr. Frank N. Furter role, the Tim Curry role, but I think the network freaked out and said we don't want to see Stamos in fishnets... again. So I play another role."

Whoa, I'm sorry bro. You know, I think it's fine to wear that Frankie boustier in the privacy of your own home, I'm freaky like that, but don't you think it's a little inappropriate in a high school musical?


Carl, we're told (not shown) from the beginning of the episode, loves loves loves Rocky Horror, and that's what he has to say about transvestitism. (Strangely enough, all the people who say they love Rocky Horror in the episode seem to hate its premise.) So they went with a girl because a boy can't wear a garter and make-up on bubble gum TV, and then they changed the lyrics from "man" to "girl" in Frank N. Furter's song to drive the point home.

And it started in the beginning of the episode, when Emma tells Will that she went to see The Rocky Horror Picture Show and he responds, "Isn't that where everyone dresses up and yells stuff?" Because those are the most noticeable features of Rocky Horror. It's like saying to someone who just read Moby Dick, "Isn't that the novel written from the first person minor point of view?" Kind of bizarre not to mention the whale.

I only noticed three times that the transvestitism of Rocky Horror was even mentioned in the episode, with two of the three blockquoted above (the other time the gay kid complained that he didn't want to wear make-up in front of everyone). If they had so much of a problem with transvestitism on this show, then they just shouldn't have done Rocky Horror. But it's edgy and respected and queer and a classic, so they had to try to grab some of that cool so they could sell albums.

Here's the original costume for Rocky, the character: 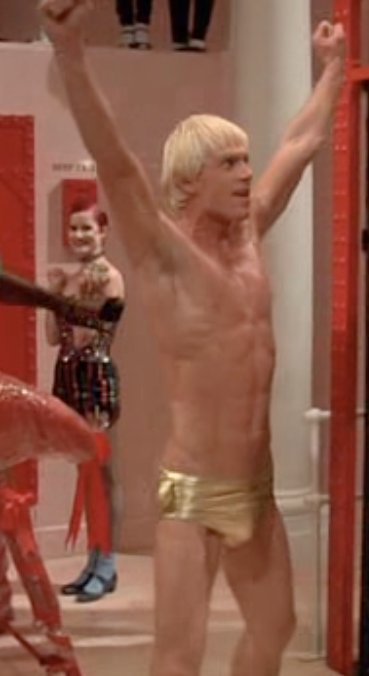 Sam appears in a far less revealing pair of shorts and complains:

Miss Pillsbury, is there a way I could wear like some gold board shorts or something? These are really short. I'm afraid I'm gonna show off some nut-age.

Let's take a look at that original costume once again: 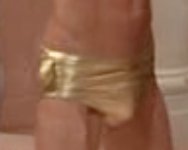 Sam got his two or three seconds in not-revealing shorts and then was in board shorts and an undershirt for the final scene. Columbia wore a Catholic schoolgirl skirt instead of the original ultra-minishorts. Mercedes's Frank N. Furter eschewed the underwear, bulge, and iconic fishnets for a pleather skirt that went to her knees. The lyrics were cut from "Touch-a Touch-a Touch Me" to take out the song's graphic sexiness. Etc.

Yet Emma took off Will's shirt at one point showing off a body few public educators have (and I find teachers incredibly sexy in reality). Carl shows up in the beginning wearing a tight leather outfit that covered him from his ankles to his neck. There's a little girl-on-girl-action-for-straight-boys in Mercedes's performance of "Sweet Transvestite." Will tells Sam he's out of the play in the men's locker room, where we get to see fuzzy, out-of-focus men's torsos in the background. Nine students, we're told, "signed up for therapy" because they saw Finn wearing boxer shorts that were less revealing than what the average American male wears to the beach. Etc.

It's all very Victorian. As Michel Foucault pointed out in his History of Sexuality, the Victorian Era actually loved to talk about sex and tell dirty tales and discuss other people's sex lives. But it all had to be done in a way that never crossed the line, that never got too graphic but showed just enough to excite the prudish bourgeoisie but never offend their sensibilities. And there always had to be an excuse to show a little skin or to talk about sex so that people wouldn't feel guilty. Jon Lovitz did a great sketch on SNL making fun of this sensibility, this very immature view of sexuality that simultaneously says bodies are off-limits and exciting.

It's profoundly un-queer and hypocritical as well, something that Rocky Horror critiques. When Frank N. Furter tells Brad and Janet to "quake with fear, you tiny fools," he's referring not just to the fact that he's trapped them, but also to the fact that they're going to have to lose control, transgress all gender and sexual boundaries, because they've been living as hypocrites and he hates them for it but he's in control, expressing a certain anger that's still found all over the LGBT community towards those straight conservatives who are just as perverted as everyone else but love to pretend like they're the Cleavers and look down their noses to judge the rest of us.

The sexiness is half the power of the movie, the other half is the transvestitism, both serving the central conflict. But since the straight oppressors win in Glee, they both got cut out.

The problem when the writers really didn't understand the source material

Fortunately, my job is easy because the show, through the character of Will, explains Rocky Horror and shows that they just didn't get it:

I was wrong. Rocky Horror isn't about pushing boundaries or making an audience accept a rebellious point of view.

Gag. That's exactly what Rocky Horror is about. It's about being rebellious and pushing boundaries. There's a reason Frank N. Furter is queer in every sense - pansexual instead of gay or straight, a transvestite instead of male, female, cissexual, or transsexual - and his goal the entire movie is to corrupt Janet and Brad. When he turns them to stone, puts make-up and cabaret outfits on them and forces them to sing and dance, that's "making an audience accept a rebellious point of view."

You know, when I was younger and they started midnight shows of Rocky Horror, it wasn't for envelope-pushers. It was for outcasts, people on the fringes who had no place to left to go but were searching for some place, any place, where they felt like they belonged. Sound familiar?

But the guy behind that speech may direct the remake of The Rocky Horror Picture Show. Expect everyone to be conventionally beautiful, Frank N. Furter to be played by a woman, and all the characters to sing kumbaya together at the end.

A word about the body fascism

Briefly, the sub-plot about Finn being fat was just weird. Here he is: 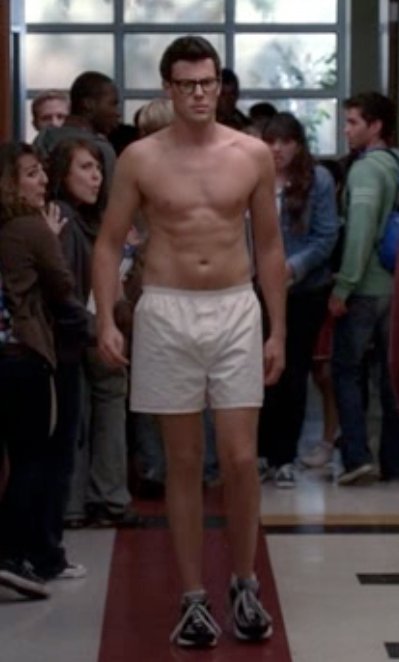 You can see abs and pecs, but he got called "the Pillsbury Doughboy" and "Baby Huey" while everyone agreed he was overweight in the narrative.

To paraphrase Brian Safi, "in better shape than 98% of America" is the Glee "obese."

Bil disagreed via IM, saying that the point of the sub-plot was about self-worth, how Finn saw himself. It's true that that was the moral, but to buy the facts of the story we have to see Finn as everyone else saw him, which is fat. And he is just plain not fat. The other characters should have had the decency to say "You're not fat" to him because otherwise it just seems like they're living in a strange, anorexic world where being as thin as possible is the equivalent of sexy.