As Beck cut into Larry the fish, he pointed out that Larry "smelled good," and then growled as he said "yummy," in a deep, rumbling voice. Apparently, Beck gutted the fish to make the point that, according to him, the mainstream media "is going to go extinct because they suck."

"Just like Larry the fish, they're full of crap," Beck said of the mainstream media.

Beck's outrage with the media seemed to be concentrated on what he referred to as the press' "coverup" of President Obama's recent open-mic conversation with Nicolas Sarkozy, in which the French president called Israeli's Benjamin Netanyahu a "liar." Beck seemed livid that the press decided to not publish the audio from the incident. (Beck based this argument on an unnamed "member of the media" who told Israeli media outlet YNet that 'there were discussions between journalists and they agreed not to publish the comments due to the sensitivity of the issue.'")

Beck then began to grotesquely remove Larry's eyes and said, "oh I forgot, this is the press!" He then mimicked the press and held up the decapitated fish head and added, "there's things you just don't need to see, America!" To drive his point home, Beck put his finger through Larry's eyeless eye socket and said, "whoo-whoo! Hello! whoo-whoo!"

Beck has made headlines in the past for using animals as props. In 2009, Beck famously threw a frog into a pot of boiling water while he criticized Republicans and Democrats.

View the slideshow below for some of Beck's more animated moments. 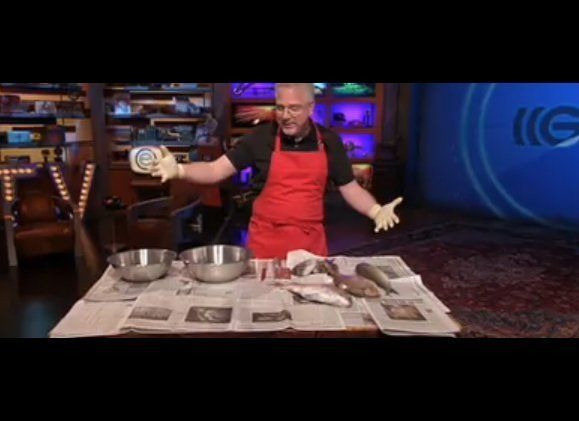