Well, Americans, our day is almost here! As you know April 15th is National Tea Party Day! Or if you want to go by it's full title, it's Fox News Channel presents a Freedom Works Production based on the short rant of Rick Santelli of Tax Day Tea Parties starring Glenn Beck, Michelle Malkin, Newt Gingrich, Sean Hannity and the Fox News Dancers.

And of all the teabaggers, none is more hyped up and ready to be dipped than Mr. Glenn Beck. As you will see when you watch this video of his Tea Party preparations. Take a look.

As others have noted, Glenn is getting harder and harder to satirize. I mean really, is it that far off to imagine him dressing up in a tea bag? This is the same man who just in the last week has pretended to be President Obama dousing a man in gasoline. He had an actor pretend to be Thomas Paine to promote the Fox News teabagging. Hell, a man fainted on his set, and people thought it was just part of the act. You know, Glenn being Glenn. And this is just in the last week!

Oh, and he's going on a stand up comedy tour. I've seen his act, and it's pretty good. However, it is a bit of a Jeff Foxworthy "you might be a redneck" rip off. See, Glenn goes on stage and says things like...

"If you randomly burst into tears at highly inopportune moments, like a four year old who hasn't had his nap... you might be a Glenn Beck."

"If instead of canned goods, your fallout shelter is full of unsold copies of A Christmas Sweater... you might be a Glenn Beck."

"If you're constantly using words you don't know the meaning of... like socialist, communist, fascist, and populist... you might be a Glenn Beck."

Hey! I got an idea. Whoever writes the best "You might be a Glenn Beck" joke in the comments section below, I'll mail them a free Headzup t-shirt. No kidding. Get a commenting! 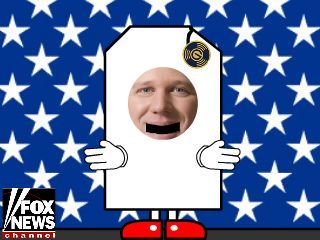 Also, feel free to follow me on Twitter if you're someone who does that sort of thing.