Two days ago a friend sent me a message. "I'm listening to Fresh Air, the Sean Wilentz episode, and they're playing a clip from Glenn Beck's program, where he's banging on complaining about talking to some Ivy League Columbia PhD who didn't know the details of some conspiracy theory... was that YOU?"

Yes, that was me.

And that's the third time I've gotten an email like that.

On June 23 I spent two hours with Glenn Beck, walking him and his (very nice) staff through Lower Manhattan, through the history of Dutch colonization in the seventeenth century to the growth and decline of the financial district in the twentieth. He's mentioned the experience at least three times since then, according to the reports of friends and acquaintances. If I or anyone I'm close to actually listened to his show regularly, maybe we'd unearth even more references. Maybe our parents' schoolyard reassurance ("they tease you when they like you") rings true.

Or maybe it's just easy to cut down ivy.

Beck reported the experience to his audience the following morning. "I knew I should have run the other way," he snorted, when he found out a "Co-LUM-bee-ia Ph.D. candidate" was leading his group. The damning institutional affliction was drawled out for maximum scathing effect.

Just as the two hours of interaction seem to have flowered into a long-term relationship. By the July 12 "Restoring History" episode I had morphed into "someone I know" who "doesn't really know history." "I was just with someone who was getting their doctorate at Columbia University who didn't know about the Black Tom explosion," he intoned: "the largest terrorist attack on US soil prior to 9/11!"

This is how Beck asked me about that event: he pointed across New York harbor and wondered if I could talk about the New Jersey "terrorist attack." It took me a minute to work out he was referring to a 1916 explosion at a munitions plant in Jersey City. Occurring at the height of World War I, the explosion was eventually linked to German sabotage. The details, however, remain murky enough that "Black Tom" has since been linked with either Irish, Communist, or Hindu (pick your scapegoat) "subversives."

In response I took the group up to the corner of Wall and Broad Streets, to J.P. Morgan's Bank. To this day the building displays the pockmarked remnants of an explosion in 1920 designed to undermine Morgan's power. No perpetrators were prosecuted, but Italian anarchists were blamed. I pointed out that some like to incorporate the 1920 bombing into a narrative about terrorism in the financial district, turning it into an antecedent to the 1993 and 9/11 attacks. Then I noted that instead of projecting explanations forward in time we might relate it just as satisfyingly to its contemporary context: to brutal labor exploitation and anti-unionization efforts, the larger story of industrialization, or immigrant integration in the city itself.

That's the historian's task: it involves sifting through all available analytical frameworks. The concept of terrorism might offer the neatest explanation, but is it the right one?

Beck University promises to counter academics who "devalue people who are self-educated." But Glenn Beck, of course, doesn't empower his listeners to weigh evidence on their own. Hand over your cash, and the for-profit Beck University will hand over The Truth:

Hi, I want to tell you a little bit about Beck University. This is something that I've been working on for a while. I don't know when we started devaluing people who are self-educated.

I know people that are going to college, getting their doctorate in history, who - they don't even really know history. They know what history professors want to be taught, but that is so unbelievably incomplete.

I was just with a - somebody who is getting their doctorate in - at Columbia, and I asked [them] about - do you know about Black Tom, the Black Tom explosion? It was the largest explosion, the largest terrorist attack on U.S. soil, continental U.S. soil, prior to 9/11. It happened almost where 9/11 happened. In fact, it registered a five on the Richter Scale.

Where does Beck's orientation to fact, fiction, and the dissemination of information come from?

Sean Wilentz was on Fresh Air to discuss his recent New Yorker article, "Confounding Fathers: The Tea Party's Cold War Roots." "For the fractious Tea Party movement," Wilentz writes, "Beck -- a former drive-time radio jockey, a recovering alcoholic, and a Mormon convert -- has emerged as both a unifying figure and an intellectual guide." Wilentz traces the genealogy of the Tea Party to the 1950s, relating it to the paranoid style that marked the height of the Cold War, comparing Beck to crusaders like W. Cleon Skousen and Birch Society founder Robert Welch. Wilentz is of course right, and the article has circulated among my (arrogant Ivy Leaguer) historian friends for good reason. But Beck's lineage can be traced back not just through political history to populist warriors. Glenn Beck owes an equal debt to a social type who has for centuries shaped American culture, a character much older than the Birch Society: the confidence man.

And I know because he told me so himself.

During our two-hour walk through lower Manhattan Beck complimented my style. Like most historians, I punctuate the my linear time line with stories about people, buildings, and events, pulling facts and figures together into a coherent narrative. Like my colleagues, I don't speak in jargoned riddles -- or, as he parodied in his "Restoring History" episode, arrogantly pontificate through pipe-smoke, an authoritative blue blazer unsuccessfully concealing my fey pink shirt. My "radical" embrace of narrative garnered his approval. "You've understood the key thing the public wants," he commended me on-to-one between stops: "The public don't want facts and figures. They want to be entertained. That's what it's all about. This is entertainment."

In that one statement Beck summarized his entire philosophy far more succinctly than I or any other commentator could do. 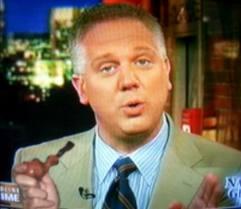 Beck's instinct for theatricality -- a Google image search instantly displays his panoply of hammy faces -- has garnered him lucrative success to a degree the self-serious Sarah Palin or the bombastic Rush Limbaugh could never realize. Beck is the latest incarnation of a centuries-long line of self-made tricksters and hucksters who have tempered showmanship and salesmanship with dashes of God and Country to offer their audience a convenient cure-all.

The confidence man has had many manifestations. Numerous examples spring to mind, from the protagonist of Herman Melville's novel The Confidence Man, to the Second Great Awakening preacher Charles Finney, to the post-Civil War northern carpetbaggers southerners so reviled. The line sometimes blurs between which of these characters springs from the pages of a novel and which from a history book because the two have become so entwined in popular memory. Just as it's no mistake that Beck peddles novels in bookstores and Real Historical Truths on his radio show. The mystification of the line between fact and fantasy is the confidence man's stock-in-trade.

Anthropologist and cultural critic Constance Rourke captured the essence of the Yankee trickster in her 1931 classic American Humor: A Study of the National Character. "The Yankee stepped out of a darkness that seems antediluvian," Rourke conjured. He then proceeded to stroll through eighteenth century New England, charming his way into villagers' hearts and wallets. "With scarcely a halt the peddler made his way into their houses, and silver leapt into his pockets. When his pack was unrolled, calicoes, glittering knives, razors, scissors, clocks, cotton caps, shoes and notions made a holiday at a fair." The confidence man lubricates his trade with stories and wit, lulling his audience into acquiescence. "He could even take the Revolution as a joke; most of his songs about it streamed nonsense. He had left the deeper emotions behind or had buried them."

Underneath his smooth veneer Rourke's Yankee swindler is sinister. But while the confidence man has always been greeted with trepidation by those around him, he admits of no culpability himself. Guilt, Calvinist or otherwise, does not temper his message because he positions himself as the very manifestation of the national spirit. The confidence man is a democrat who affirms that anyone can do anything. Despite the afflictions of alcoholism, drug addiction - and in Beck's case, that most fashionable of disorders, ADHD - this guy found a way forward, so we can too. In the words of Stephen Colbert, that other brilliant manipulator of the line between fact and fantasy, "I am America (and so can you!)."

Beck has traded in the calico for a radio mic and the knives for novels, but his function echoes his forebears. Under the razors lining the inside of his coat the confidence man offers one thing: confidence. A conspiracy theory is comforting because it presumes order undergirds the chaos that surrounds us. This later-day huckster unfurls diplomas for his newly branded Beck University, promising a road-map through the Oz disgruntled Tea Partiers feel they've been consigned to. All with a rubbery Alfred E. Neuman grin and a Groucho-reminiscent eyebrow wiggle.

That other great American showman, P.T. Barnum, famously said "a sucker is born every minute". The sad -- or sinister -- aspect of the Beck circus, however, is that the stakes are so much higher. Especially as we head into the midterm elections.

But maybe I'm just being an overly analytical academic. Maybe the cloud of smoke I puff through my burnished pipe courtesy of my luxurious Ivy League stipend is clouding my vision. The public just wants to be entertained, after all. That's what it's all about.