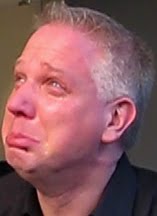 Fox News founder Rupert Murdoch and network honcho Roger Ailes have a decision to make about an employee.

Glenn Beck's the name; tearful televangelism's the game, and his latest on-the-road routine is straight out of Pat Robertson's The 700 Club.

Beck spent years as a cocaine-addicted morning "shock jock," drifting through various radio markets around the country, as reported in a bracing Salon biography last year. He once phoned a rival's wife on the air for laughs, without her prior knowledge or permission, and cruelly asked if it was true she'd recently had a miscarriage. It was.

Overt racism was also a regular bit of his in those days.

More recently, he's turned into Elmer Gantry on TV, radio and in personal appearances. For those unfamiliar, Gantry is a con-artist evangelical preacher in the famous 1927 novel by Sinclair Lewis. A 1960 film version starred Burt Lancaster, who won an Oscar for Best Actor.

The Tyler Morning Telegraph reports that he was introduced to 4,500 disciples by the state's Republican governor, Rick Perry (the guy who threatens secession from the Union). The views expressed were worthy of some desert tent revival hosted by an Imam in Riyadh, Saudi Arabia (just substitute Allah for God).

According to Beck, "It is time to say things that need to be said -- the only way to solve our problems is if we fall to our knees and thank God for the blessings of this country. Do you believe this is God's land? Do you believe our constitution was divinely inspired?"

At this moment, the newspaper reports, "the crowd rose in unison to its feet applauding loudly and yelling."

Beck and his acolytes should read the U.S. Constitution's preamble: "We the people of the United States, in order to form a more perfect union, establish justice, insure domestic tranquility, provide for the common defense, promote the general welfare, and secure the blessings of liberty to ourselves and our posterity, do ordain and establish this Constitution for the United States of America."

The word "ordain" -- then and now -- means "to order by virtue of superior authority," meaning "We the people" are the superior authority. Unlike what Beck says, the Constitution's preamble means that our rights come from -- and belong to -- us, the people.

The earlier Declaration of Independence was as clear: to secure our rights, governments are instituted, "deriving their just powers from the consent of the governed" (through elections).

Poor God shouldered an awful lot of weight at Beck's event. State representative Leo Berman, as a warm-up act, told the audience, "I believe that Barack Obama is God's punishment on us today..."

In other words, we duly elected Obama, but it was God who controlled our decision, out of anger and spite.

I'm no Doogie Howser, but isn't this medically certifiable in the real world?

Meanwhile, the charlatan from the "fair and balanced" network concluded: "I don't know what is supposed to happen on this land. I have no idea what God has in store for these people, our children, our grandchildren and great-grandchildren. He just asks you to stand in place and that is our job -- to stand where he wants us to stand."

By his own admission, Glenn Beck is merely an entertainer, and spent much of his adult life doing mean, drug-induced things on the radio. Now he's shamelessly appealing to the religious right for personal profit ($32 million last year alone, according to recent reports).

Do his Fox News bosses, Murdoch and Ailes, really want to remain part of this unseemly business, especially since Beck has lost major advertisers over the past year and is down to hawking gold coins?

What Beck traffics in is not legitimate news, and it's not even legitimate commentary about news. It's just gibberish, with fundamentalist Christianity thrown in.