The ultimate lesson of Mr. Beck's rally yesterday is you cannot say things like "I think the president is a racist," and then say "I stand by that," then present yourself as someone who will "restore America." It offers a surreal reality that makes people feel like they're in the political twilight zone. At least that's how I felt. 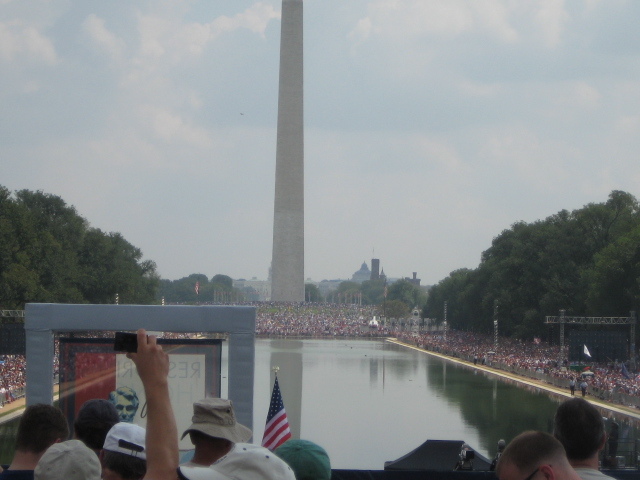 This type of hate speech directed at the first African American president in United States history is nothing Martin Luther King, Jr. would "commend," using the word Dr. King's niece did yesterday, speaking at Beck's rally. At least not before he received a retraction from the hater who uttered the words.

King's niece, anti-abortion activist Alveda King, was one of many minority speakers and awardees, a group that also included St. Louis Cardinals first baseman Albert Pujols, a native of the Dominican Republic, who received an award for promoting hope. Like Beck, Alveda King linked the rally to her uncle's speech. "If Uncle Martin were here today, he would surely commend us for giving honor where honor is due," she said. [...] - Glenn Beck calls for national revival

Bradley: How do you think Dr. King would feel about this rally?

Palin: I hope that Dr. King would be so proud of us, as his niece Dr. Alveda King is very proud as a participant in this rally. This is sacred ground where we feel his spirit and can appreciate all of his efforts. He who so believed in equality and may we live up to his challenge.

Dr. Martin Luther King, Jr. would have told Sarah Palin to repent and retract her "Don't retreat -- reload." Dr. King a man whose message relied on the power of words to lift people up out of despair, never trading in Palin's type of militaristic machismo to prove strength. That Mrs. Palin ignores this biographical and historical fact of King is part of the weird alternate reality that was presented yesterday.

Likewise, if you can forget Glenn Beck's hate speech history, this shared reality Palin, Glenn Beck and the rally conjured up was indeed inspiring. However, knowing the rhetoric he utilizes daily, along with Palin, I simply sensed the intense degree of desperation from the people attending, individuals so hungry to hear someone, anyone, say something that represents their feelings they'll gladly take Glenn Beck, even if he's someone who only walks the walk he talked yesterday, this one day out of his life.

Every single person I talked to said the Congress and federal government is guilty of "runaway spending," the mantra, with others also talking about a "government takeover." The frustration with Congress not doing the will of the people was another constant theme. The message discipline and focus was impressive and heartfelt, with no race-baiting, hating signs in my vicinity or on the long path I walked, though it was far too crowded to possibly hit all spots. It was, however, very white.

If there's one unifying disconnect so many feel, shared by people way beyond Washington, D.C. it's this: Who will speak for me? Yesterday it was Glenn Beck, helped by many others, including Sarah Palin, and even Dr. King's niece, in front of a crowd of purposeful people hoping it all amounted to a statement that Pres. Obama and Congress will hear.

In front of multiple tens of thousands, estimates ranging from 100,000 and beyond, Glenn Beck began by saying the "Restoring America" rally had "nothing to do with politics, everything to do with God." Giving the gentlest interpretation of what he meant, Beck could have stretched his message to a non-partisan rally, but I can't even buy that, because politics was very much in play, the only people God speaking on stage, though He/She did provide good cover.

One Vietnam veteran walking with the help of a rolling wheelchair and wearing a full upper body brace (he'd broken his back), walking with his wife, inspired me to ask what brought him out amidst such crowds and with such a tough time to maneuver. He said that things yesterday are so bad he had to come, "This is not how our country was intended." His wife chimed in to say they came "from the other Washington." I asked his political affiliation, with his wife saying "Independent!" When I prodded the veteran on if their coming to the event was about being anti Obama I got something totally unexpected. He said, "No, I voted for Clinton. He was conservative and ended up with a budget surplus." We talked about the genesis of the Tea Party, and they both agreed that it started under George W. Bush, "but we're getting a late start," said the veteran.

From early morning people started streaming into Washington, D.C., stopping traffic, a people parade over the Memorial Bridge, taxis letting people off, police immediately on them to move, with crowds emerging from the metro as well. I didn't get to hear Sarah Palin, but did hear Glenn Beck, which was the goal. Mr. Beck has to be impressed and moved with what he saw as he became the megaphone for the multitude.

It's very sad to see Bob Herbert get so upset about Glenn Beck's rally. It gives Mr. Beck a space that he hasn't earned, bringing Dr. King down to Beck's level for comparison, which is not only inappropriate, but truly silly to even expend the energy. Not giving Beck at least credit for the crowd is at least uncharitable, because credit is due, with it making Dr. King no worse for this truth. Perhaps it's Mr. Herbert who needs to "chill, baby, chill," because the only way Beck can share ground with Dr. King is if we allow it, which Herbert does by going to such lengths to refudiate Beck's rally. Martin Luther King, Jr. was a giant among American heroes who has no equal, certainly no one yesterday came close, regardless of choosing a day that is enshrined in American history, which Mr. Herbert understandably cherishes, as do we all.

But as time marches on no patriot or person owns a calendar day. Real American heroes live beyond a moment, our memories and the manifestations of their dreams how they live on.

Besides, considering Mr. Beck had Dr. King's niece, abortion rights opponent Alveda King at the rally, it's not like Beck is ignoring Dr. King, praying for linkage on this one day when Beck is on his best behavior.

Never fear, because Beck's hate speech will return on Monday.

Taylor Marsh is a political analyst and national political writer out of Washington, D.C.