Despite being the subject of what's been described as the "worst police sketch ever," an armed robbery suspect has been found.

Glenn Edwin Rundles, 32, was arrested last week and is charged with aggravated robbery, indecent exposure, and burglary, the eParis Extra reported. Police believe Rundles is the man who robbed two women at knifepoint in East Post Oak, Texas, on January 16.

The case would have been unremarkable were it not for the resulting police sketch of the suspect, which was so bad that it prompted Gawker to pose the question, "Did two Texas women get mugged by a cartoon?"

When the Lamar County Sheriff's Department originally released the photo, they included the illuminating statement: "The sketch is not a true depiction of the suspect, only a likeness."

The department told the eParis Extra that they did receive helpful tips based on the description they released of the suspect, which read as followed:

The victims described him as being approximately 6′ tall or a little taller, approximately 25 to 30 years old with no or very thin facial hair, and a muscular build. His nose was straight with no flare in the nostrils. He has short black hair and a round face, with tattoos covering both arms and a tattoo on the left side of his neck. The victim was adamant about the tattoo on his neck having a lot of red ink in it.

Now that Rundles has been caught, you be the judge: Does his face match the artist's rendition? 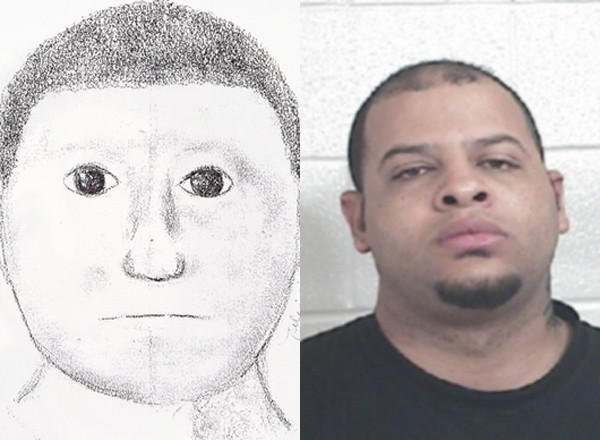