Glenn McConnell, the president of the College of Charleston, released a statement Thursday supporting the removal of the Confederate battle flag from its display at the South Carolina state Capitol grounds.

McConnell has been a longtime defender of Confederate symbols and used to sell Confederate memorabilia. He made his statement just a week after nine people were shot and killed at the Emanuel African Methodist Episcopal Church, a historic black church in Charleston, South Carolina.

Dylann Roof, the alleged killer, had reportedly considered conducting his shooting spree at the College of Charleston, where McConnell took the reins last year, leaving his position as the state's lieutenant governor to do so.

First elected to the state legislature in 1980, McConnell went on to serve as president pro tempore of the South Carolina Senate for a decade before becoming lieutenant governor. During part of that time, he also ran a Confederate memorabilia store.

In the 1990s, McConnell at one point argued that removing the Confederate flag and other symbols of Southern separatism from public life would amount to "cultural genocide," according to the Charleston Post and Courier. He said that the flag was not racist, and that it "hurts" to see the Ku Klux Klan flying it.

But in a statement Thursday, McConnell said:

Today is a different time. In the aftermath of the horrific tragedy that spilled the blood of nine souls within the hallowed halls of Mother Emanuel A.M.E. Church, the time has come to revisit the issue of the Confederate soldier’s flag, which a number of our citizens regard as offensive.

Many other citizens regard the old soldier’s banner as a fitting memorial to the Confederate dead. However, on State House grounds, we should seek to respect the views of all citizens as best we reasonably can.

Therefore, I support Governor Haley’s call to remove the Confederate soldier’s flag from State House grounds as a visible statement of courtesy and good will to all those who may be offended by it. At the same time, I also urge all public officials and activists who are focusing on this issue to come together, the way the good people of Charleston joined hands following the terrible tragedy we suffered, and agree not to transfer the fight to other physical vestiges and memorials of our state’s past. In a spirit of good will and mutual respect, let us all agree that the monuments, cemeteries, historic street and building names shall be preserved and protected. How sad it would be to end one controversy only to trigger a thousand more.

McConnell now joins several other college presidents in the state, including the leaders of Bob Jones University, The Citadel military college, Clemson University and Furman University, in calling for the Confederate flag to be removed from its post on the South Carolina Statehouse grounds.

McConnell was a controversial choice to lead the College of Charleston, his alma mater, due in part to his defense of Confederate symbols.

At one point, McConnell considered legislative action to go after the state's largest utility company after it banned employees from parking their company vehicles at the barbecue shops owned by Maurice Bessinger, who refused to serve black people and who sold a pamphlet purporting to explain the Biblical justification of slavery, according to the Charleston City Paper. McConnell also sold Bessinger's products at his own memorabilia shop after major retailers refused to stock them. 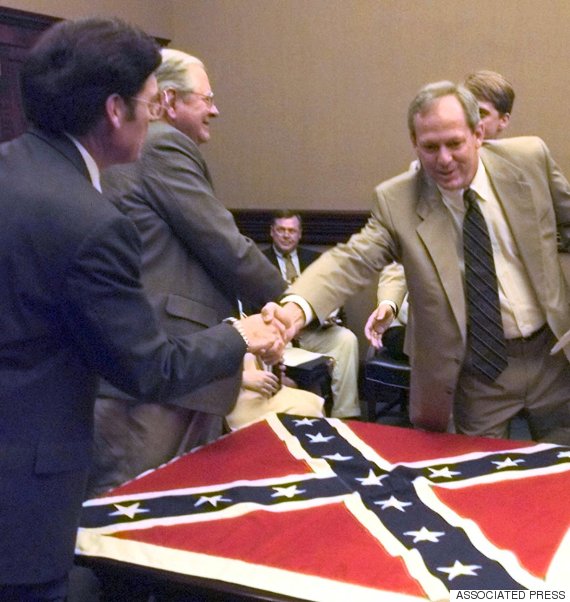 Still, The Washington Post reports that McConnell has had his defenders, too. State Sen. Darrell Jackson Sr., a black Democrat, said that both he and Rev. Clementa Pinckney, a former Democratic state senator who was killed at the church shooting, supported McConnell's presidency at the College of Charleston. And since coming to the school, McConnell has taken steps to increase diversity. McConnell was also credited as an architect of the 2000 law that moved the Confederate flag down from atop the dome of the Capitol to the pole in front of it.

"During this period of grief, before Reverend Pinckney and the eight other Christian martyrs killed by a hateful terrorist have yet to be buried, I had hoped to avoid commenting on political issues," McConnell said in his statement Thursday. "However, the rising tide of emotion over Governor Nikki Haley’s call to remove the Confederate soldier’s flag from State House grounds and numerous requests for me to comment have made a respectful period of silence on political issues impossible."

McConnell said the 2000 compromise to reposition the flag was bipartisan and biracial, and that it had meant to move the state forward with a "spirit of good will and mutual respect."

"As imperfect as all compromises are, it lasted for 15 years," he said.