Prague is ultimately a very revealing place where the glitter of capitalism battles the gloom of communism on a day-to-day basis.

Having lived through the Romanian communist dictatorship, I can vouch for the fact that there is a common denominator to be found of certain mentalities and ways of doing things in all of the ex-communist countries, still today. Communism left similar scars on people of different nations the same way apartment buildings built in that period are almost identical in most of those countries.

Many people are still on the defensive, thrifty with their smiles, sometimes out and out hostile, openly resentful towards Westerners who flooded into their countries since '89, buying up prime real estate and businesses. This results in sullen and grim behavior and cold customer service even in a Mecca of tourism like Prague. Perhaps short-term visitors don't notice much, spellbound by the beauty of the place, but things are different for foreigners living here. If Kafka were alive in his old haunt, he would have a field day. All he'd have to do would be to go shopping for food at Tesco to find endless inspiration. 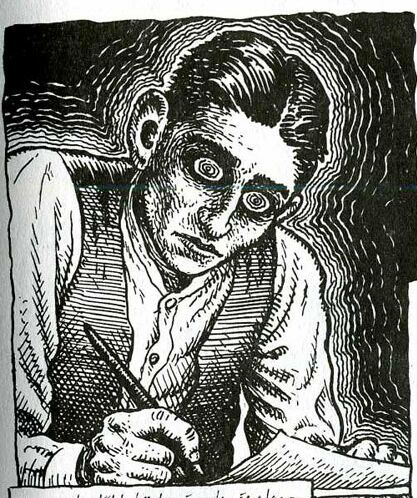 Like a number of other international conglomerates, Tesco, the giant British supermarket chain, came to Prague in the 90's and spread like a virus. Within a short period of time all the small shops anywhere near their outlets were swallowed up or chased away, so at this point there are next to no alternatives when you want to shop for food. What few choices there are tend to be scattered around town, so one needs time and good physical condition to bounce around for what will be a fairly limited choice of products anyway.

The branch of Tesco I shop at is located in the smack center of the city, on Narodni (National) Street, where hoards of tourists pass every day of the year, rain or shine. That being the case, you would think that most of the personnel would speak English, but they don't. Service is provided by a whole host of workers, from older folks who lived under communism to young ones who have been taken on lately. Considering that the Czech language is utterly alien to most foreigners, it would be handy to have people working there capable of speaking English.

I have sympathy for them all, it's hard work that pays peanuts, but I have to admit that after almost five years of shopping there I have reached the end of my rope.

In the beginning I had patience. OK, so they don't speak English. Well, considering their salaries, it's no surprise, and we are in their country after all; and besides, one could always get help from a nice Czech customer who speaks English to translate.

Ok, so they don't smile, they give you dirty looks or act impatient when you need some help. They had a tough past, and this is not America.

All right, so some of the vegetables have moved onto their next lives, and are still being sold at full price.

Ok, they won't give you another plastic bag to carry all those bottles. You hope for the best.

That's how my war started. After being refused a plastic bag and having to jam three bottles into one bag, together with a lot of other bulky items, I was headed out of the store when the bag broke from the weight, and my shoes were instantly soaked in a mixture of white wine and olive oil.

I appealed for help from a security guard positioned to nab shoplifters near the exit, but he majestically turned his back. I imagined this situation was not among his professional responsibilities. I was lucky when an old English couple helped me back to the cash register, carrying many things we salvaged from the floor.

By now however it is a cruel joke: I have the same problem almost every time I go. I made attempts to befriend some of the cashiers in the hopes that my life would be easier when I might need an extra bag, but the personnel rotates constantly, so you never know who you are going to get, like Russian roulette. The nice ones are few and far between, and there are days when none of them are on the job and instead I find myself faced with rows of dour, gloomy faces.

So as soon as there is any issue at all, I don't waste time arguing with the unhappy employees; I demand to see a manager right away. Though the managers also often speak no English and usually need the help of some pimple-faced teenage temp they just hired who does, they tend to be accommodating for the most part, promising to make things better, saying yes to everything I tell them, eventually getting me the bags I need and apologizing profusely. However there are also managers like one recently, a young dark-haired tall man who was extremely aggressive; he acted as if he would have loved to punch me in the face, refused to tell me his name and treated me like I was the enemy. But even when they are friendly I learned that it means absolutely nothing, because the next time I would have the same exact problem all over again. They don't train their people to be flexible with their customers, or even just plain nice for that matter. 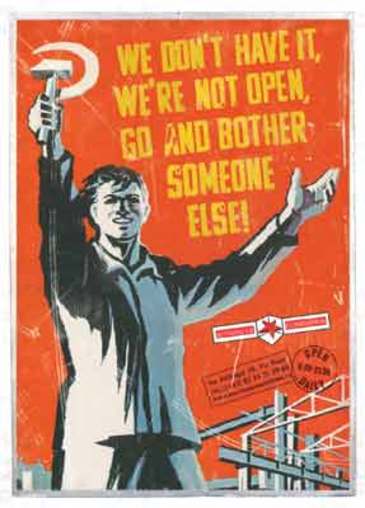 The managers' idea of improvement is sheer insanity. For them it means moving and shifting the products constantly, so the customers, even regulars like myself, never know where anything is, and find themselves spinning in circles like blind chickens. Where yesterday you would have found vegetables today you find bread. You want canned tomatoes, tough luck. You won't find them with the canned goods, and if you ask someone to help you, chances are they don't understand you, or if they do, they don't know and they don't care. But if you persist you will discover, thanks to one informed salesperson, that the canned tomatoes are where they should be: next to the cheese!

They used to have very delicious brownies and I turned a lot of friends on to them. They were becoming so popular, they would be sold out by 5pm every day. Then, one day, at lunchtime, I went to buy them but there weren't any. "Brownies, prosim?" "Ne. Neni brownies... kaput." No more, forever, no matter how much everybody I knew complained to the managers to get them back again. Ne! (meaning "no," a word you will hear a lot).

The same thing happened with bagels; they went kaput too, like just about everything I would like and buy for a while. The policy, obviously, is that when something sells it must be discontinued.

Another classic situation is the refusal of the meat and fish counter salespeople to wear plastic gloves. They handle the meat and fish with bare hands because, "You have to cook the meat anyway," as it was explained to me by the belligerent young manager.

Recently I wanted to buy some salmon, and when I asked if the fish was fresh that day, the guy behind the counter started to poke it with his naked fingers to show me it was indeed fresh. I didn't want to hurt his feelings (I had liked him up until then) and I asked in the nicest way possible if he could not touch the fish like that, especially since he obviously had a cold. He got very angry and in a declamatory way waved his hands in the air and said in English: "With these hands I cut the fish! With these hands I clean the fish! With these hands I sell the fish!" "Then put some gloves on those hands!" I retorted and left, without the fish.

The lack of customer service can be found often, from chain stores to small shops, to the post office, but when it happens in places that sell food, like a supermarket or restaurant, it's particularly nasty.

It's not nice to be told in a restaurant to go to McDonald's after you complain that the order they brought you is completely wrong, or to be turned away an hour before closing time in a place you frequent often; it makes you wonder why should you give these places your business. Thankfully, it doesn't happen all the time, but when it does it can ruin your day.

When I came to Prague I recognized some of the same issues I was familiar with from Romania, but it seemed so much nicer, prettier, and on the surface, more accommodating and civilized (and it is). But after living here for some years, observing the subtle misery, how some people hate their jobs and hate you for making them work, or because you're foreign, and seeing how things haven't changed much as the years pass, it seems to me that in these ex-communist countries, it's going to take decades, if not entire generations, to witness a different mentality.