Sixty five million years ago, the dinosaurs had a bad day. Phil Plait's talk, "How to defend Earth from asteroids," describes how our own species might be able to avoid a repeat performance. Scientists take this threat is seriously. It is the subject of a recent National Research Council report "Defending Planet Earth" and the upcoming Planetary Defense Conference in Flagstaff, Arizona (April 15-19, 2013). How worried should we be?

It would be the ultimate irony if we developed the technology to defend our planet from asteroids, but not from our own behavior. - Mark Boslough

I want you to put them in order of how likely you think they are to kill the average American. See if you can guess the odds of dying from each of them. Don't peek ahead!

We're even worse at estimating the likelihood of a global catastrophe. How do we calculate our personal probability of being killed by an asteroid? First, we have to know how many are moving in orbits that take them close to the Earth. Next we have to know the distribution of sizes (there are a lot more small ones than big ones). We need to estimate how many there are in each range of diameters. Finally, we have to have an idea of how many people would die from impacts of various sizes. Big asteroids -- like the one that wiped out the dinosaurs -- are a lot deadlier than the small ones that explode in the air.

The first serious attempt to quantify the asteroid impact risk was done twenty years ago. A team led by my colleague David Morrison published the "Morrison Report," which came to the startling conclusion that each of us was as likely to be killed by a rock from space as we were to die in a commercial aviation accident. The good news was that most of the threat was from the biggest ones -- about two thirds of a mile or more in diameter. Those are the easiest to detect and track, and there are only about a thousand of them.

At the recommendation of the report, astronomers conducted a survey to discover those big ones to find out if any of them were on a collision course. The strategy was similar to looking both ways when you come to a busy street. If there's nothing coming, you proceed. Otherwise, you take action (by waiting to cross, or by deflecting the asteroid).

We lucked out. After 90 percent completion, there are no large asteroids that can hit us in the foreseeable future. That doesn't mean we should stop looking, of course. A large impact would still lead to a catastrophic climate change that could cause the collapse of agriculture, spelling the end of civilization and the world as we know it. And we've barely made a dent in the hundreds of thousands of smaller objects that have the capacity to wipe out a city and kill millions.

How does this compare to the other planetary threats? The one we've been hearing about lately is the apocalypse that was supposedly to coincide with the end of the Mayan calendar on Dec. 21, 2012. But that's just a hoax. The same David Morrison who quantified the impact risk has been a tireless debunker of the 2012 myth. By the time you read this essay, you will know he was right about that, too.

One way to compare various threats is to determine how many people die, on average, every year. We can use a theoretical number, based on calculations, for asteroids, and compare it to numbers compiled by the World Health Organization. Here's the resulting table, based on one in Defending Planet Earth:

Asteroids and climate change are the only two threats in the table that can have abrupt and global consequences, and to which everyone on the planet is exposed, regardless of their lifestyle or personal behavior. In principle, they are both preventable. In both cases mitigation would require international agreements and cooperation. But would such collaboration even be possible if a threatening asteroid were discovered, or would we be bogged down in the same kind of denial and obstruction that has prevented action on climate change?

Evidence from Greenland ice cores and other paleoclimate data show that spontaneous and extreme climate changes take place much more frequently than large impacts and on time scales that can exceed human adaptive capacities. Asteroid impacts are rare events, but abrupt climate changes are common by comparison. Only 13,000 years ago, the North American megabeasts -- including woolly mammoths, saber-toothed cats, giant sloths -- also had a very bad day. Well, at least a bad millennium. It was so bad that some scientists have mistakenly attributed that mass extinction to a 2 ½ mile-wide comet explosion. That idea has also been debunked by many scientists, including -- you guessed it -- David Morrison.

Fortunately, there are only around 30 undiscovered asteroids larger than a mile in diameter. The probability of impact by one of these before the end of the century is 0.0005 percent. On the other hand, recent research suggests a 2 percent probability of global catastrophe from anthropogenic climate change by the end of this century. It is reasonable to suggest that a human-caused climate catastrophe is at least 40,000 times more probable than an asteroid catastrophe. And for anyone who has looked at the temperature records for this year, we can't say we haven't been warmed!

The scary lesson of the North American megabeast extinction is that it doesn't take a giant impact to create a bad day. The Earth is susceptible to catastrophic climate changes that can be triggered by much smaller events. We are now in the process of disrupting the Earth's energy balance with a speed and magnitude that only the largest impacts have achieved in the past. It would be the ultimate irony if we developed the technology to defend our planet from asteroids, but not from our own behavior. And if we don't do something about it soon, we are in for a very bad century. 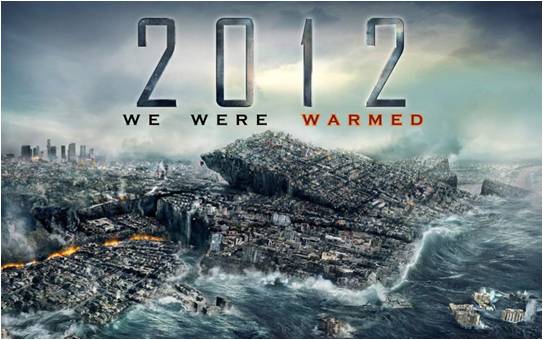 Finally, here are the answers to the quiz: