Virtually no one should be surprised to learn that climate talks currently underway in Bonn, Germany -- the latest venue for the decades-old and largely fruitless pursuit of international agreement on global warming action -- are descending into chaos. This time around, Russia, along with Ukraine and Belarus, are facing off with other nations and effectively blocking movement on negotiations fundamental to forward progress -- including how to provide financial assistance for poorer nations grappling with the worst impacts of a warming planet.

The Slavic negotiators are apparently miffed about their treatment during talks in Doha, Qatar, last year, where they say their concerns over extending the Kyoto Protocol -- currently the world's only obligatory climate agreement, albeit one that excluded the largest polluters and has proved largely ineffectual -- were ignored. The current impasse threatens to undermine the Bonn talks altogether, sending the tireless caravan of negotiators to Warsaw, Poland -- site of this year's annual United Nations climate fête -- with little to show in the way of agreement on anything at all.

"Governments need to look up from their legal and procedural tricks and focus on the planetary emergency that is hitting Africa first and hardest," declared Mithika Mwenda, coordinator of the Pan African Climate Justice Alliance, which represents the interests of myriad poor nations on the continent, in a statement circulated to the press on Wednesday. "Russia's shenanigans have set back critical work on loss and damage mechanisms and so now Poland, as host of the next summit, must find a way to ensure this issue is dealt with fully." 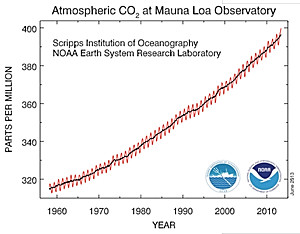 Atmospheric concentrations of carbon dioxide over the last 50 years, as measured at the Manua Loa Observatory in Hawaii.

Whether that will happen is anybody's guess, of course. What's clear is that while nations have dickered, bickered, ducked and weaved over the last two decades, global emissions of greenhouse gases have ticked steadily upward -- mostly fueled by booming new economies like China's and India's. By some measures, the Kyoto agreement (which mostly bound the rich nations of Europe to emissions reduction targets, while the U.S. famously refused to participate) yielded some success, if emissions are measured on a strict nation-by-nation basis.

The reality, however, is that much of that burgeoning economic activity in the developing world is geared toward production of goods that are shipped to and sold in developed nations in Europe and North America, suggesting that global emissions are merely being shifted around the planet. One analysis published in the Proceedings of the National Academy of Sciences, for example, found that the volume of emissions arising from this sort of increased international trade significantly exceeded -- several times over -- the share of emissions cuts achieved under Kyoto.

And so it was that, early last month, the planet quietly slipped past a symbolic milestone in atmospheric concentrations of the chief global warming gas, carbon dioxide: 400 parts per million. What doest that mean? From the Los Angeles Times:

Many scientists have warned that carbon dioxide readings must be brought down to 350 ppm to avoid severe climate impacts and stall "feedback loops" that will exacerbate the rise.

Current ratios of carbon dioxide in the Earth's atmosphere remain at levels not seen in more than 3 million years, when sea levels were as much as 80 feet higher than current levels.

For the previous 800,000 years, CO2 levels never exceeded 300 ppm, and there is no known geologic period in which rates of increase have been so sharp. The level was about 280 ppm at the advent of the Industrial Revolution in the 18th century, when the burning of fossil fuels began to soar.

Those stakes are both well known and the very impetus behind each new round of well-meaning global climate negotiations. But the nagging truth here is that human beings are, in aggregate, a rather self-centered and shortsighted species, and one far more inclined to indulge parochial and near-term interests before addressing global and conceptually distant ones. In short, there is little hope that these global climate meetings will ever yield much in the way of a solution to the problem of human-driven climate change. Even if a truly comprehensive and ambitious agreement on emissions reductions were reached in the coming years -- and no one believes it will be -- the carbon dioxide already pumped into the atmosphere will continue to heat things up for decades.

That doesn't mean negotiators should quit trying. But the reality is that the greatest potential for combatting global warming can be found at the local or regional level; in the actions of individual nations pursuing their own agendas; and perhaps -- though few die-hard environmentalists like to admit it -- in humanity's capacity for technological derring-do.

Good things are happening on these fronts. Australia has introduced a nationwide tax on carbon, a strategy that supporters say has produced a 7.4 percent drop in emissions and a 30 percent increase in the clean-energy sector in just one year. Business-friendly forces, of course, are aligning to repeal the tax if given the opportunity, but so far the measure appears to be holding strong.

Germany, meanwhile, is busy transforming its entire energy sector in an unprecedented embrace of renewable power. South Korea has embarked on similarly ambitious plans for fostering clean energy resources over the coming decade, and even China, with its ever-increasing appetite for planet-warming coal, has endeavored to offset at least a small fraction of its own emissions with large-scale investments in clean energy and efficiency. "What China has done over such a short period of time to improve energy efficiency and deploy clean energy is already paying major dividends to the global environment," said Fatih Birol, the chief economist with the International Energy Agency, in a statement accompanying a report last year on the planet's relentlessly rising CO2 emissions.

According to that report, China's carbon intensity, which reflects the amount of carbon dioxide emitted per unit of GDP, fell by 15 percent between 2005 and 2011. "Had these gains not been made," the report noted, "China's CO2 emissions in 2011 would have been higher by 1.5 gigatonnes."

And of course, much has been made of the recent drop in greenhouse gas emissions in the United States. Some of that has been attributed to the economic downturn, but other factors -- including state-level renewable energy quotas, regional greenhouse gas agreements, increased emphasis on energy efficiency, and, to the chagrin of many environmentalists, the steady supplanting of coal-fired electricity with power produced by newly abundant (and cleaner burning) natural gas.

President Barack Obama and Chinese president Xi Jinping unveiled an ambitious agreement over the weekend to mutually reduce the use of hydrofluorocarbons, or HFCs, a class of widely used refrigerants that contribute to global warming. If the economics could ever be solved, nuclear power might have a bigger role to play in driving down emissions. Huge investments in technologies that can capture and safely store carbon emissions are also in play, though it's still unclear when -- or even whether -- they will be ready for commercial deployment. And while the very mention of the term "geoengineering" evokes skepticism and dread in many corners, the potential to tinker with the mechanics of the planetary climate in order to reduce the warming effect of rising carbon dioxide emissions remains an area of fertile exploration.

In other words, a good deal of activity is happening at levels well below that of the ever-stumbling, ever contentious, and so-far rather feeble global climate negotiations. Will these national, regional, local and technological efforts prove commensurate with the crisis that rising emissions appear to promise? It's hard to say. But given the poor odds that talks in Bonn or Doha or Warsaw or Copenhagen or any other stops on the international climate conference tour will ever find a moment of meaningful kumbaya, these alternative solutions are all we've got.

In the meantime, the stakes keep getting higher.

"If nothing is done to reduce the dependence on fossil fuels, CO2 could keep rising for centuries, depending on the amount of coal, natural gas, oil, and any new forms of fossil fuels that are extractable," wrote scientists at the Scripps CO2 Research Group in La Jolla, Calif., on the occasion of the historic new high in carbon dioxide concentrations being reached last month. "By some estimates, the ultimate resource of fossil fuels may be large enough that CO2 will rise as high as 1,600 ppm before fossil fuels are fully depleted," the researchers noted. "This would be sufficient to cause the world to warm between 4 to 10° C (7 to 18° F) with unimaginable consequences."