"It makes no sense to invest in companies that undermine our future. To serve as custodians of creation is not an empty title; it requires that we act, and with all the urgency this dire situation demands." -- Desmond Tutu 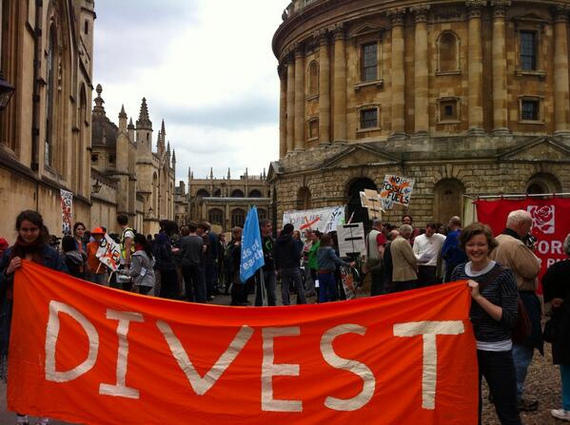 The climate battle is heating up.

At a January 16 press conference, NASA and NOAA (The National Oceanic and Atmospheric Administration) jointly released independent analyses that confirm 2014 as the hottest year on record. Last year broke records set previously in 1998, 2005 and 2010. Except for 1998, the 10 hottest years have all occurred since 2000.

The press release followed a week in which the world's two most prestigious broad-spectrum scientific journals -- Science and Nature -- published articles that bookend the issue of climate disruption. Respectively, the two articles 1) confirm that humans are quickly rendering the earth uninhabitable for our own species, and 2) inform as to what must be done to restore the planet for future generations.

In the Science article (January 15, 2015), 18 co-authors from diverse disciplines address "Planetary boundaries: Guiding human development on a changing planet." The article's central theme concerns the notion of a "safe operating space" for humans. The "boundaries" of that space are defined by evaluating the health of the planet in nine broad areas: patterns of extinction, deforestation, levels of atmospheric carbon dioxide (CO2), ocean pollution from nitrogen and phosphorus run-off, ozone depletion, freshwater usage, ocean acidification, atmospheric aerosol pollution, and lastly, the introduction of exotic chemicals and modified organisms. For each area, safe limits are established and termed "planetary boundaries."

Greater detail can be found in the January 15th Washington Post, but here's a rough summary of our report card to date. In the first four areas listed above, humans have already exceeded the safe limits. Give us F's in those areas. In two of the remaining five areas -- freshwater use and ocean acidification -- we remain currently within safe operating limits, despite significant degradations. Give us C's in those areas. For two of the remaining categories, there's not yet enough data to evaluate. Grades of I (incomplete) are appropriate in these two areas. And in a lone area, we've actually made progress. We've partially closed the atmospheric ozone hole thanks to the Montreal Protocol, an international treaty of 1989 banning chlorofluorocarbons. Give us, say, B+ here.

Overall, we deserve perhaps a D. Why? According to the article's lead author, Will Steffen, of the Stockholm Resilience Center: "... human activities -- economic growth, technology, consumption -- are destabilizing the global environment." The trends, however, are almost all in the wrong direction.

So great, in fact, is human impact on the earth that scientists have coined a term for the current geologic epoch: Anthropocene. Human activity has altered the earth to such an extent as to precipitate The Sixth Extinction (2015). Species are vanishing -- due to deforestation, pollution, climate change, and a host of other factors -- at rates many times those considered "natural" or "safe." The canaries in the proverbial coal mine are dying in droves.

Jared Diamond's masterful book Collapse: How Societies Choose to Fail or Succeed (2011) is chock-full of cautionary tales of human civilizations that exceeded their natural limits and perished, or nearly so: Easter Islanders, Pitcairn and Henderson Islanders, Norse Greenlanders, the Anasazi, the Maya, the Viking Vinladers, and many more. The difference between then and now is that today's humans inhabit a global community in danger of global collapse.

The choice is yet ours. That's where the Nature article (January 8, 2015) chimes in. It outlines a major step in the path to resilience rather than collapse: dealing with the climate. First, it delineates the climate boundary. The general consensus among climate scientists is that catastrophic climatic disruptions can be avoided if average warming remains below 2 C (3.8 F) throughout the 21st century. Second, the 2 C warming limit imposes a secondary limit on the aggregate amount of carbon that can be released into the atmosphere from future burning of fossil fuels. That number is 1,100 gigatons. Frighteningly, known fossil-fuel reserves exceed this value by a factor of five. The article's conclusion:

... globally, a third of oil reserves, half of gas reserves, and over 80 percent of current coal reserves should remain unused from 2010 to 2050 in order to meet the target of 2 °C.

Finally, the Nature article specifies exactly which resources must remain in the ground, region by global region. For example, "... the development of resources in the Arctic and any [emphasis added] increase in conventional oil production are incommensurate with efforts to limit average global warming to 2 C." In layman's terms: fossil-fueled business as usual is insanity.

Divest/Reinvest. Because of the likelihood that a large fraction of today's known fossil-fuel reserves will become "stranded," fossil fuels no longer represent safe investments. Thus, continued reliance on fossil fuels is neither safe environmentally nor safe economically. Humans must quickly transition from fossil to renewable energy. There's no other sane alternative.

For this reason, the global divestment movement, which began just over two years ago, is taking off. The idea is simple. Transferring financial investments from fossil fuels to renewables (e.g., solar, wind, geothermal) uses the market to incentivize the necessary transition in the energy sector. Divestment works. It contributed significantly to ending South African Apartheid in 1994.

Join the groundswell by participating in the first Global Divestment Day on February 13-14, 2015. You'll be in good company. The list of divestment advocates is growing exponentially. Here's a sampling of the organizations that have divested or called for divestment: more than 60 religious organizations including the Church of Sweden and the World Council of Churches (July 11, 2014); 20 colleges and universities, including Stanford (May 6, 2014); and 26 American cities, including Seattle (December 21, 2012).

The divestiture movement has garnered some surprising allies. On September 22, 2014, the Rockefeller Brothers Fund -- administered by heirs of Standard Oil founder John D. Rockefeller -- divested from fossil fuels. The reasons were straightforward, as reported in the Guardian:

We are quite convinced that if [Rockefeller] were alive today, as an astute businessman looking out to the future, he would be moving out of fossil fuels and investing in clean, renewable energy.