Economist Joe Stiglitz warned back in 2010 that the world risked sliding into a "Great Malaise." This week, he followed up on that grim prediction, saying, "We didn't do what was needed, and we have ended up precisely where I feared we would."

The problems we face now, Stiglitz points out, include "a deficiency of aggregate demand, brought on by a combination of growing inequality and a mindless wave of fiscal austerity."

He says the only cure is an increase in aggregate demand, far-reaching redistribution of income and deep reform of our financial system. The obstacles to this cure, he writes, "are not rooted in economics, but in politics and ideology." 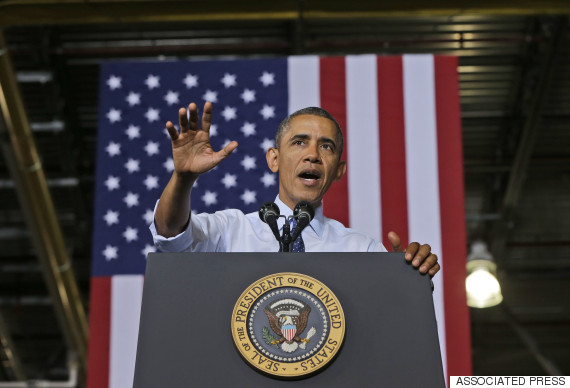 President Obama speaks in Liberty, MO., in 2013 to highlight the progress in the economy since the 2008 financial crisis. (AP Photo/Pablo Martinez Monsivais)

Back before 2008, I used to teach my students that during a disturbance in the business cycle, we'd be 40 percent of the way back to normal in a year. The long-run trend of economic growth, I would say, was barely affected by short-run business cycle disturbances. There would always be short-run bubbles and panics and inflations and recessions. They would press production and employment away from its long-run trend -- perhaps by as much as 5 percent. But they would be transitory.

After the shock hit, the economy would rapidly head back to normal. The equilibrium-restoring logic and magic of supply and demand would push the economy to close two-fifths of the gap to normal each year. After four years, only a seventh of the peak disturbance would remain.

In the aftermath of 2008, Stiglitz was indeed one of those warning that I and economists like me were wrong. Without extraordinary, sustained and aggressive policies to rebalance the economy, he said, we would never get back to what before 2008 we had thought was normal.

I was wrong. He was right.

In 2008-9 in America, the share of prime-age adults -- those of us too old to still be in school in large numbers and too young to be even thinking about retirement in large numbers -- who had jobs dropped by five percentage points -- leaving one in 11 of this class who had held jobs in 2000, and ought to be holding jobs, without jobs.

Despite the positive jobs report today, we have climbed back less than halfway to where we were in 2007 and less than a third of the way back to where we were in the full-employment year of 2000. The Federal Reserve thinks that it does not dare try to keep interest rates low enough and asset holdings high enough to attempt to close any more of the gap because of its fear of triggering an unwelcome inflationary spiral.

There are those of us who believe that the Federal Reserve is wrong to have made this decision. Larry Summers has written that he would only see "a reasonable case for the [Federal Reserve's] monetary tightening" if he "believed strongly in... a Non-Accelerating Inflation Rate of Unemployment around five percent and in inflation expectations' responsiveness to a heated up labor market." But long ago, economists Douglas Staiger, James Stock and Mark Watson cured everyone of having strong beliefs about what the NAIRU -- the rate of unemployment below which inflationary pressures build -- is. And Olivier Blanchard, Eugenio Cerutti and Summers himself provide only the most recent demonstration that today inflation is only one quarter as responsive to unemployment as it was in the 1970s.

But that is what the Federal Reserve has decided. So that is where we are.

And look outside the United States: Western Europe and Japan are in even worse shape than the U.S. is. And today, the main engine of what world economic growth we have seen over the past seven years -- China -- is more than sputtering. The Chinese stock market this week is telling us that China's economy is possibly stalling-out entirely as far as growth is concerned.

What about emerging markets around the globe? They will find it easy to sustain rapid growth and continue to catch up in the direction of North Atlantic levels of prosperity only if the North Atlantic economies (plus Japan) can regain their mojo and once again provide a buoyant market for emerging-market resource, manufacturing and information technology service exports.

The Chinese stock market this week is telling us that China's economy is possibly stalling-out entirely as far as growth is concerned.

Unless something big and constructive in the way of global economic policy is done soon, we will have to change Stiglitz's first name to "Cassandra" -- the Trojan prophet-princess who was always wise and always correct, yet cursed by the god Apollo to be always ignored. Future economic historians may not call the period that began in 2007 the "Greatest Depression." But as of now, it is highly and increasingly probable that they will call it the "Longest Depression."

The first task will be one of education. We will be unable to reliably adopt good policies and unable to sustain them (if we do by accident adopt them) unless we understand our situation. Thus everybody needs to read, think about and teach the lessons of two of the very best books of the past two years: Martin Wolf's "The Shifts and the Shocks" and Barry Eichengreen's "Hall of Mirrors."

The three-sentence elevator version of Eichengreen is: We remembered barely enough of the lessons of the Great Depression to avoid its recurrence. But then the fact that we did not have a Great Depression removed the spur that would have pushed us to relearn the lessons we had forgotten and to then apply them. Thus we are now trapped in Stiglitz's Great Malaise.

The three-sentence elevator version of Wolf is: Stability begat complacency, complacency begat carelessness and hence fragility and fragility set the stage for crisis.

What we need now is debt relief and much tighter financial regulation.

What we need now is 1) debt relief to unwind the overhang and 2) much tighter financial regulation to prevent the growth of new fragilities. And if those prove inconsistent with full recovery, then we need massive government spending on infrastructure and other investments financed by money printing until full employment is reattained.

The second task will be one of political organization. For until politicians, finance ministry technocrats and central bankers feel under pressure to respond to and in fact internalize the diagnoses of Stiglitz, Eichengreen, Wolf and others, our problems will remain, as Stiglitz puts it, "not rooted in economics, but in politics and ideology."

And it is only after those ideological and political blockages have been removed that the tasks of economic policy -- and then of shifting policy to deal with the new problems that arise as consequences of fixing our current economic policies -- can be seriously begun.