The global economic collapse of the last several months is already greater than the shock that hit the world 80 years ago, triggering the Great Depression, two economists reported Tuesday.

But by focusing narrowly on U.S. economic metrics, policy makers have missed the depth of the crisis and are too optimistic about recovery, they argue.

"I do see green shoots -- not everywhere -- but certainly in some of the markets that we've been functioning in," Federal Reserve Chairman Ben Bernanke told 60 Minutes in March.

"All these people talking about green shoots; and about, maybe, light-at-the-end-of-the-tunnel; and that things are showing signs of getting better now are looking exclusively at the United States," said Barry Eichengreen, an economist at UC Berkeley, who co-authored an item that rocketed around the economic blogosphere Tuesday.

The post, by Eichengreen and economist Kevin O'Rourke, compares various global economic indicators side-by-side with the early years of the Great Depression. 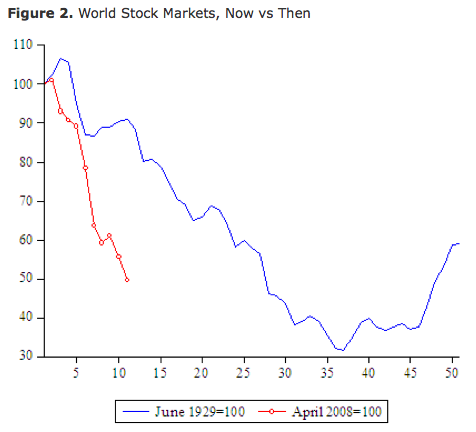 Eichengreen told the Huffington Post that policy makers who see signs of improvement are "premature in their optimism. I don't think we in the United States can be an island of prosperity in a depressed world."

The charts Eichengreen and O'Rourke compile are striking: world output, world stock prices and trade volume have all fallen faster during this collapse than during the last. Several economists wrote Eichengreen to note that because of price deflation after the '29 collapse -- which has yet to happen again -- the stock market decline this time around is that much greater in real terms.

The reason the decline is worse today than during the Great Depression, says Eichengreen, is that in 1929 the United States and Germany both collapsed, but other nations managed to stumble along.

The global nature of the collapse is important for two reasons, Eichengreen stressed. First, it underscores the need for a global round of stimulus spending, which many European leaders dismissed at the G-20 meeting last week. And second, it effectively eliminates the one solution -- an increase in exports -- that has worked for countries in recent years that have suffered bank collapses.

"Countries that have had severe banking problems exported their way out of the problem," said Eichengreen, citing Japan, Norway and others. But today, with the global economy in such steep decline, increasing exports is highly difficult.

"The point that we were trying to make is that the need for a coherent, aggressive policy response globally is really very pressing," said Eichengreen.