Just days before the Oscar acceptance speeches are made and the Academy Awards red carpet is filled with celebrities, the more eco-minded celebs turn to the green carpet at Global Green USA's 8th Annual Pre-Oscar party. At the Avalon Hollywood, the event helps raise funds and awareness for Global Green's national initiatives to fight climate change.

Also, for the second year, at the start of the green carpet made of synthetic grass, the Chevy Volt electric vehicle was plugged in and leading the cat walk. Some of the celebrity guests were driven to the event in Chevy Volts like Alison Brie (pictured below and seen in Community, Mad Men and the soon-to-be-released Scream 4) and Maggie Grace (Lost, Taken, and Irina in the upcoming The Twilight Saga: Breaking Dawn) among others.

While chatting with the different guests I asked what each of their 2011 Green Resolutions were and received the following responses: 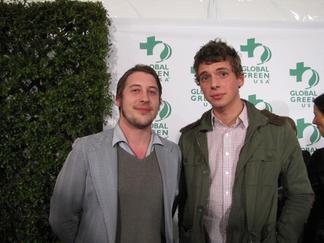 During the event, Global Green also unveiled their Model Carbon City Index tool, basically a smog test for cities. Los Angeles is the pilot city for the Index and unfortunately scored a C- for it's adoption and implementation of policies related to greenhouse gas emissions reductions.

For the past seven years, Global Green has collaborated with the Hollywood community to raise global awareness of Smart Climate Solutions -- from celebrities driving green cars to the Oscars, to creating affordable green homes and schools, buying green products, and voting for green political leaders. Global Green is the only national environmental group headquartered in Southern California and has offices in New Orleans, New York City and Washington, DC. For more information, please visit www.globalgreen.org.