In our travels we've watched schoolchildren in former war zones scatter at the "boom" of a textbook hitting the ground. We've seen the traumatized eyes and weeks-long silence of a freed child slave still trapped in his years of confinement. We've read newspaper headlines of rising suicide rates in both cities and countryside. And we've met people suffering silently whose languages don't have a word for depression because it "doesn't exist."

Mental health challenges are a significant barrier to economic and social development around the world. Resources and expertise are extremely limited, creating a huge gap between the need and the ability to treat. But with focused efforts using well-known, simple and cost-effective interventions, communities and countries can turn mental health into a source of strength and a way out of poverty.

Mental disorders flourish in developing countries where war, disaster and mass urbanization are unsettling traditional social support networks and creating a constant state of uncertainty for huge numbers of people. Depression alone is predicted to be the world's leading cause of disease by the year 2030. Developing countries are home to 86 percent of the world's 900,000 annual suicides but just one psychiatrist for every two million people, so the mental-illness drag on development will only get worse. Mental disorders hamper contributions to household chores and income; they increase risk for other costly health problems like HIV, cardiovascular disease and diabetes; and they drain productivity and human capital from societies in desperate need of both.

Fortunately, in the root causes of mental illness are the seeds of stronger mental health. "You start by improving maternal health care, period," says Dr. Stanley Kutcher, a global expert in mental health at Dalhousie University in Halifax.

"If we want mental health, we need healthy brains," according to Dr. Kutcher. Investing in mothers and their children from pregnancy through age three would improve brain development and decrease the prevalence of mental disorders, especially those that come from substance ingestion and malnutrition in protein and other key vitamins, he explains,.

From there, mental health interventions focus primarily on three objectives: tackling the deeply entrenched stigma against mental illness; developing mental health literacy among the general population; and building capacity at the community level to diagnose and treat mental illness with accessible primary-care interventions. The groundbreaking 2001 World Health Report -- which focused on mental health for the first time -- appealed for a "positive shift" from institutionalizing or ignoring those with mental disorders, to promoting preventive mental health and local screening in community settings.

"Most mental disorders globally are mild to moderate in intensity, not severe," says Dr. Kutcher. "We have the capacity and knowledge to identify and treat these disorders very effectively in primary care." Community health workers and traditional healers are given specific training on diagnosis and treatment, while the small percentage of severe cases are referred to the few trained psychiatrists.

First, however, one must break through the thick wall of stigma around mental illness. "I call it mental health by stealth," says Dr. Kutcher. Instead of labeling workshops and peer education programs as "mental health" initiatives, projects like his Farm Radio International program in Malawi talk about the brain like any other organ that needs to be healthy. "What's good for your bicep is good for your brain," goes the refrain, "and brain disease is no different than pancreatic disease." These anti-stigma campaigns promote mental-health literacy by focusing on child development as an educational and economic goal, which gets students, parents and community leaders more readily on board.

Together, these interventions bolster mental health in communities, identify cases requiring primary treatment, and free up the few professional psychiatrists and precious high-level resources to care for severe disorders resulting from traumatic events like war and disaster. Stronger mental health leads to economic returns from enhanced human capital, increased productivity and lower net health costs. And they empower people everywhere along their journey toward a healthier and happier life.

The next challenge is scaling up these mental health programs to reach all the communities and countries that would benefit. The World Health Organization estimates the cost at between only US$2 and US$4 per capita per year -- but that's billions of dollars that are hard to come by among competing development priorities that are more visible and "marketable," like fighting malaria or building schools.

So while mental health is often cited for its role in promoting overall global health and tackling global poverty, it's not an explicit development objective for most foreign aid agencies or charities. Mental health interventions are slowly working their way into post-disaster planning and pilot projects like those supported by Canada's government-funded Grand Challenges foundation. But until mental health gets a more deliberate place on the development agenda, low-income people, communities and countries will continue struggling to move themselves up the economic development ladder.

Craig and Marc Kielburger are co-founders of international charity and educational partner, Free The Children. Its youth empowerment event, We Day, is in 11 cities across North America this year, inspiring more than 160,000 attendees from over 4,000 schools. For more information, visit www.weday.com. 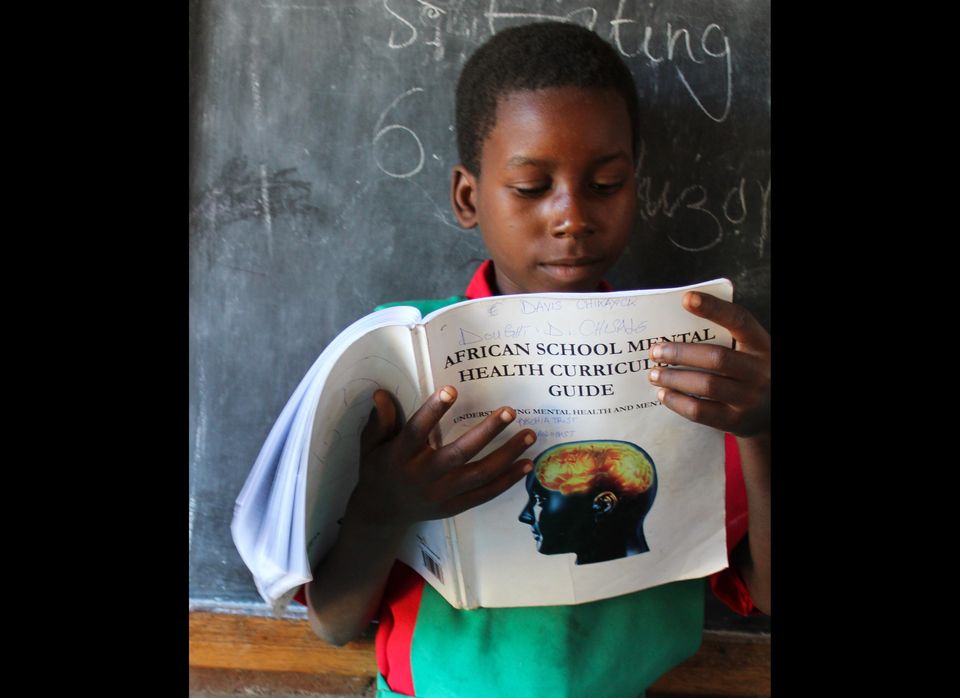 1 / 7
A boy studies the "African School Mental Health Curriculum" made available through a Farm Radio International led program. The guide, which was initially produced for use in Canadian schools, was adapted to the African context by local mental health experts and translated into Chichewa and Swahili. By integrating learning about mental health into schools, youth can learn what a mental disorder is, and how to recognize when they themselves or one of their friends may need help.