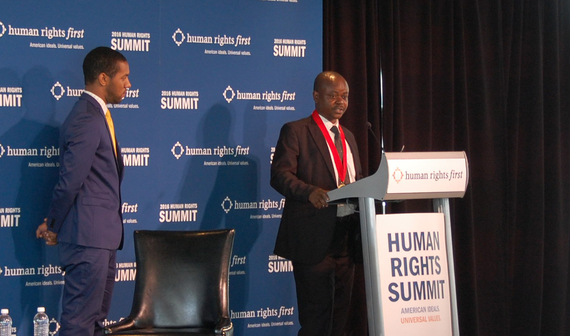 Overcoming fear is essential to freedom, and in eastern Congo there is plenty to be frightened about. Millions have died in conflict over the region's vast mineral wealth. Control of mines and the slaves who work them has turned the region into one of the world's most dangerous places.

That's why anti-slavery activist Janvier Murairi Bakihanaye of the FTS partner organization ASSODIP was awarded the Roger Baldwin Medal of Liberty today in Washington by the group Human Rights First. The medal, named after the founder of the American Civil Liberties Union and the International League for Human Rights, honors "outstanding contributions to the protection and promotion of human rights around the world."

"We in the social justice sector in the United States often say that each organization has its own role to play - direct action, some do advocacy, some do education - Janvier and his colleagues do all of it, and they do it with extremely few resources in difficult and dangerous circumstances. So we have great respect for you," said Human Rights First President and CEO Elisa Massimino.

Janvier is "a champion of human dignity," actor Josh Charles noted in a video introducing him to the 2016 Human Rights Summit. "His courageous work against slavery and other forms of exploitation has enabled people in rural communities to assert their human rights."

"Freeing a person from slavery is good, but the ideal is to find ways to permit them to permanently resist slavery without any vulnerabilities," Janvier told the summit when accepting his award. He called for people to join in solidarity to help end trafficking worldwide. "Anti-slavery work is a long-term task that requires a commitment on the part of all mankind. Each of us has a leading role to play in the eradication of this old, degrading and dehumanizing practice," he said.

See Janvier's group in action in the FTS short films: Slavery in Your Pocket and The Economics of Freedom.

Janvier said he would use part of the $25,000 Baldwin Award prize to help rehabilitate and reintegrate child slavery survivors into their home communities in the town of Rubaya.

Earlier in the day, Janvier visited FTS to express gratitude for the support we've been able to provide to his group. He said he is confident that slavery will end, in no small part because we believe that ending slavery is possible. 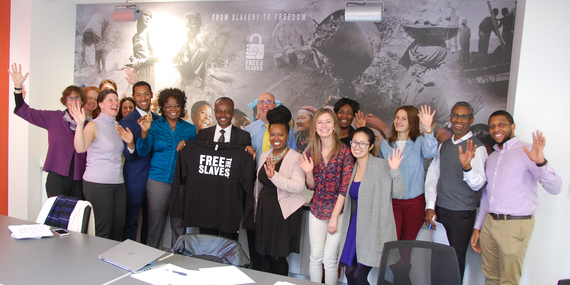 "It is the sincere hope of Human Rights First and of the [award selection] jury that this award will afford Janvier some measure of protection, shine a spotlight on the important work that he is doing, and help engender additional support for an important cause," said attorney Daryl Libow, who chaired this year's Baldwin award selection process.

Our congratulations to Janvier! Learn more about the work of his group on our Congo webpage.