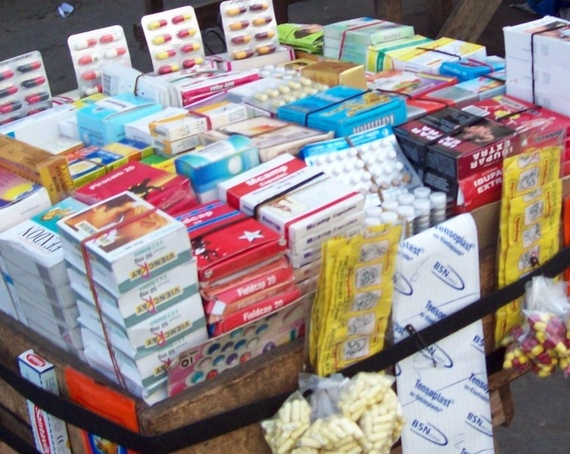 Americans have largely felt insulated from the distribution of illegally trafficked and fake drugs. Previously, contraband drugs were found mostly in the Global South, but just as legitimate pharmaceutical supply markets shift so do illegal markets. Over the past decade, the incidences of contraband pharmaceuticals and over-the-counter drugs have increasingly appeared in U.S. markets. Just as counterfeit garments and accessories make their way into America so do unregulated and fake drugs as the world becomes more interconnected. Production is spurred by high returns on investment helping to fuel this growth. Despite Americans' false sense of security, the rise in illegal pharmaceutical distribution and counterfeit drugs is a growing global public health issue. Better engagement between local and international pharmaceutical suppliers and distributors, regulatory agencies, and consumers would help to reduce this trade.

The United States is increasingly being pulled into this global trade. In May 2015, the Drug Enforcement Administration (DEA) announced that it had arrested 280 people involved in trafficking large quantities of drugs in "Operation Pilluted." The raids took place in Louisiana, Mississippi, Arkansas, and Alabama and those apprehended included medical professionals and street vendors. Hundreds of thousands and more than $18 million dollars' worth of money and property were seized. The drugs included large amounts of painkillers, such as oxycodone, which are popular on the black market. Pharmaceutical drug misuse by consumers leads to drug overdose and death; according to the CDC, 44 people die from pharmaceutical use each day. With the rise in technology and expanding trafficking networks, the United States like much of the world will continue to be a target for illegal pharmaceutical trafficking rings.

At an international pharmaceutical regulatory meeting in Dakar, Senegal, in April, where I served as an observer, representatives of government and industry expressed their concerns over the problem of illegal drugs, and there was some muted discussion on how to respond. In Africa, pharmaceutical regulation happens at the local, global, and international level, which sometimes leads to a multitude of approaches. Regulatory variations along with different regional and country politics and in some cases powerful contraband investors are some of the factors that make it challenging for overarching policy to control informal pharmaceutical trade and consumption.

Pharmaceuticals distributed in unregulated markets enter these spaces as drugs that have been siphoned from formal networks or as counterfeit drugs. Those siphoned from formal networks are fully potent. However, someone buying or selling drugs cannot visually tell the difference between the two. Counterfeit drugs can contain from 0-100% of the active ingredients depending on the manufacturer. In addition, copies often contain inactive and sometimes harmful ingredients, such as chalk, talc, and lead paint. Because someone can't often decipher the original from a copy of the package, pill, capsule, or other form of the drug, it is virtually impossible to guarantee its safety.

In comparison to growing pharmaceutical trafficking in the United States, in West Africa, Senegal and Nigeria harbor particularly robust markets for illegal pharmaceuticals. Senegal's informal trade relies primarily on drugs siphoned out of formal distribution networks that are sold en masse at Keur Serigne Bi - a market specializing in the sale of both illegally trafficked and counterfeit drugs - in the capital Dakar as well as sites throughout the country. In Nigeria, the illegal pharmaceutical trade is much more expansive, and it is one of the largest in West Africa and on the African continent. Deaths have been linked to fake malaria and diabetes treatments as well as fake adrenaline and antibiotics.

To be sure, many consumers of trafficked drugs throughout the globe argue that they are more affordable than medicine purchased in pharmacies. In some cases, this may be true but the amounts are usually minimal. What is the price to the consumer in securing safe, regulated drugs instead of those that are more likely to be substandard or completely inactive?

Illegal pharmaceutical markets vary by place and scope. Another West African country, Ghana, has gained success in reducing ambulatory street vendors. In addition, Ghana was also a forerunner in introducing cell phone technology that allows consumers and pharmacists to verify the authenticity of drugs. Nigeria, through the backing of USAID and Obama administration funds is offering a $10,000 USD reward for citizens who report the distribution of contraband and fake malaria medication. This initiative will be too costly for many countries, but there are other ways to reduce the trade in contraband drugs, such as increasing engagement between government, regulatory, manufacturers, and other stakeholders; creating better oversight to reduce the siphoning of drugs from formal sectors; and ensuring greater consumer access to low cost commonly used drugs and generic drugs in expensive markets.