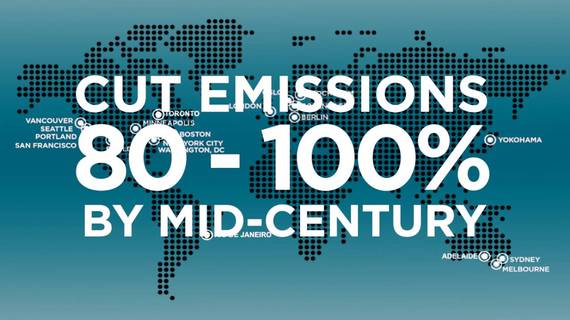 This week, in response to President-elect Donald Trump's cabinet picks for Departments of State, Energy, and Interior, as well as the Environmental Protection Agency, mayors from Canada, Europe, Latin America and Australia sent a sharply worded letter to mayors of American cities, noting that climate action "cannot take a sabbatical and wait another four years".

The letter pulled no punches, citing that Trump was abdicating responsibility in protecting Americans and, on the Paris climate agreement, "unraveling the diplomatic thread that weaves together one of the most important international agreements ever".

The international mayors, leaders themselves in the global fight against climate change, took issue with Trump's first 100 days, fearing that "he will do everything he can to dramatically expand the production of shale, oil, natural gas and coal; lift roadblocks to fossil fuel pipeline expansion projects like Keystone Pipeline; and cancel billions in payments for climate change programs", noting that Trump's "cabinet picks are reflective of this regressive commitment".

"President-elect Trump has picked a fellow climate science denier to lead the EPA, an oil tycoon to head the State Department, an enthusiastic fossil fuel extractor as Energy Secretary, and gas pipeline supporter Ryan Zinke as Interior Secretary," said Johanna Partin, director of the alliance, in a statement accompanying the letter. "These appointments are illustrative of how many steps back America is already starting to take," she said.

Referencing Trump's campaign slogan, the mayors suggested that the work of "making America great" is really about "ensuring that its people are healthy and happy, its economies and environments are thriving, and its security is sound".

The way to do that, the mayors continued, is to "put people - not fossil fuels - at the center of our economies".

Here's the full text of their letter:

We, as some of the Canadian, European, Latin American and Australian mayors of the Carbon Neutral Cities Alliance, write this letter to express our strong support and solidarity with you as you work to aggressively fight climate change and improve the health and well-being of your communities and your local economies.

The recent U.S. election makes clear that you--America's leading cities--are even more essential to accelerating climate action in the United States. Climate action cannot take a sabbatical and wait another four years or another election cycle for more aggressive action.

America's president-elect has made it clear that he plans to eviscerate the country's environmental protections, including plans to cut emissions at coal-fired power plants, one of the most egregious carbon footprints in one of the world's largest greenhouse gas emitters. President-elect Trump has stated that in his first 100 days he will do everything he can to dramatically expand the production of shale, oil, natural gas and coal; lift roadblocks to fossil fuel pipeline expansion projects like Keystone Pipeline; and cancel billions in payments for climate change programs. His cabinet picks are reflective of this regressive commitment.

The international community gathered last month at COP 22 in Morocco to plan for low-emissions solutions and pathways. Countries like Canada, Germany, Mexico and others unveiled their plans to achieve the Paris Agreement in their countries, while president-elect Trump began unraveling the diplomatic thread that weaves together one of the most important international agreements ever.

We see climate change as a core issue of national interest and a key driver in the march toward a cleaner and more equitable future. Clean energy employment grew 12 times faster than overall job creation in the U.S. in 2015, and this trend is growing. Business leaders understand this.

This is why you, the mayors of America's leading cities, must continue to be at the forefront of climate action in the U.S. going forward. This is increasingly important as your new national leadership abdicates responsibility for protecting Americans and the world from fossil fuel impacts to our people's health, our economies, and our environment.

Since cities are responsible for nearly three-quarters of the world's total greenhouse gas emissions, and the majority of the world's population lives in cities, cities are the right places to focus. You have already stepped up to demonstrate this leadership -- your cities are already showing that you can accomplish what national leaders such as President-elect Trump refuse to touch. Leading cities, like the cities of the Carbon Neutral Cities Alliance, are moving as fast as possible toward more livable, sustainable cities, irrespective of national government support or lack thereof.

Life gets better, cleaner, healthier, and more efficient as we embrace a clean energy future, work to eliminate dirty emissions, and put people -- not fossil fuels -- at the center of our economies. Making America great is about ensuring that its people are healthy and happy, its economies and environments are thriving, and its security is sound. We pledge to support you as you continue to do this.

We hope the Trump administration will support you, America's leading cities, in your efforts. However if they do not, we, as fellow leading climate action cities, will stand by you to help in whatever ways we can.