Fast as the number of millionaires in emerging economies might be growing, it'll be quite a while before any country catches the United States.

A new report by the Deloitte Center for Financial Services, predicts total global wealth of millionaire households in 25 major economies will more than double by the end of the decade to $202 trillion from $92 trillion this year.

The wealth of United States millionaire households, specifically, is projected to rise by 223 percent by the end of the decade, reaching $87 trillion. That would keep 43 percent of the world's millionaire wealth within the U.S., among the countries in question. In the last decade, the U.S. watched its share of global millionaire wealth fall to 42 percent from 55 percent in 2010.

In total, the number of U.S. millionaire households is expected to reach 20.6 million, Deloitte says, nearly double its current amount. By the end of the decade, Deloitte expects Japan to rank second in the world with 8.6 millionaires households.

The below chart tracks total millionaire wealth, with blue for emerging economies and green for developed economies: 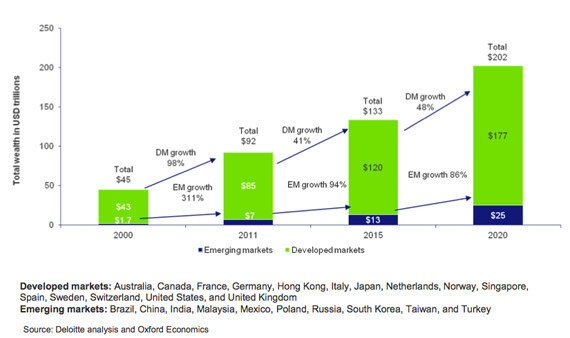 Despite the continued dominance of U.S. millionaires, emerging economies will push the global wealth forward, the report finds. China is expected to be the primary engine of millionaire wealth, followed by Brazil and Russia.

By 2020, Deloitte predicts, South Korea will replace Taiwan as the only other emerging economy besides China to rank among the top 10 countries in total millionaires. China will see its total millionaire wealth jump to $8.24 trillion by 2020 -- a 493 percent rise.

The developing world is poised for a particularly steep rise in the number of superrich households -- or those with wealth exceeding $30 million. The number of China's superrich is projected to grow sevenfold by the end of the decade; the ranks of Brazil's superrich are expected to triple.

The tiny city-state of Singapore, similarly, is on track to have the highest per capita wealth overall by 2015, at $4.2 million, supplanting the developed economy of Switzerland.

Within the United States, California is expected to continue to harbor the largest number of wealthy households, and New Jersey the densest concentration of the rich.

Nevada and Arizona are predicted to see the largest jump in net worth of their millionaire households in the next four years.