This post is part of the Global Mom Relay. Every time you share this blog, $5 will go to women and girls around the world. Scroll to the bottom to find out more.

Esther lives just off the main road of a small town in Western Kenya in a mud-walled, tin-roofed home, typical of the area. Despite her meager income, she had spruced up the interior of her home with lace doilies, plastic flowers and framed pictures of loved ones, making the small space inviting and comfortable. Until last year, she had scraped together a living selling fruit, and, even without a husband's support (hers passed when the children were young), she was able to see four children through secondary school. This was no small feat in a country where secondary school fees often exceed a rural family's income.

Her last child had just graduated from secondary school, freeing her from the largest expense of child-rearing, when she got the news: her eldest son's girlfriend, Lydia, lay in the hospital dying of complications from childbirth.

Esther had never met Lydia, but it was easy to pity her. A gracefully beautiful but shy woman, Lydia had endured her pregnancy and birth in a city far from her rural homeland and nearly alone, save the support of a 14-year-old cousin. When her post-birth bleeding continued too long and her strength seemed to be disappearing too completely, this girl was the only person around to take Lydia to the hospital.

When Esther arrived in the district hospital and saw Lydia clinging to life and the tiny newborn grandsons that just the day before she hadn't even imagined existed, she collapsed to the floor. When she regained consciousness, Lydia spoke to her with what little strength remained, saying "I know you do not know me, but these children are your blood. Please care for them. I have named one Michael for my father and the other one you may name." She died the next day.

Esther felt she had no choice but to take in these twins as her own. Having raised her own children largely as a single mother, she couldn't imagine them growing up without a "mother's love." The babies' father was entering college, and she knew they would be given the best chance when their father could finish his degree and better provide for his sons. Only her care would allow for that.

Despite Esther's insistence that she could not "deny a dying wish," she fretted over the unfathomable burden she had inherited. The early days were nearly impossible. With two crying infants and no one to help her, she barely slept at all, and she was forced to abandon the only money-making endeavor she ever knew. She attempted nursing the newborns, which is possible in some cases even if the woman didn't give birth, but with twins it was simply too hard. And formula was an unaffordable luxury.

But slowly, through perseverance and some outside help, Esther has given these babies a real shot at life. She has lovingly cared for them, fed them, kept them warm at night, immunized them and seen them through a bought of malaria, which nearly killed them. 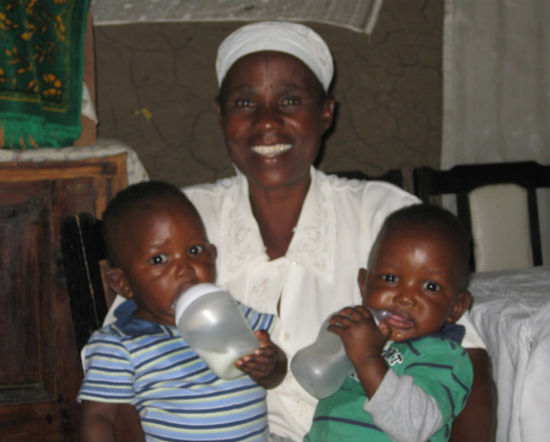 The twins are now 10 months old. They are fat and healthy and growing into two distinct personalities. Michael, Esther told me, is more of a mama's boy and more reticent around strangers, she guesses because he's the one who sleeps closer to her at night. Joseph, who sat willingly on my lap much of our most recent visit, was the first to crawl and is now pulling himself up taking some steps.

Esther and the countless women like her are true heroes, but we should not spend too much time celebrating their immense sacrifice. They should not have to make it. The babies they care for should never have been orphaned.

Too many mothers die needlessly in childbirth, victims of poverty, lack of access to care and inability to control reproductive decisions. The losses remained an abstraction to me until I moved to Kenya and became pregnant with my second child. As my belly swelled and I felt the baby move, I learned of an acquaintance who didn't make it through her own birth, leaving a devastated family to care for a needy infant. While nursing my newborn, I learned of Lydia's too early demise. Now those losses had become grim, unthinkable realities.

Eliminating maternal mortality is not a pipe dream, it's a stated goal. 189 countries signed on to the Millennium Development Goal of reducing maternal mortality (MDG #5) by three-quarters by 2015. This will take resources and commitment. It will take champions of the cause, like the women at World Moms Blog, and political will.

While the global community works to improve access to better care for mothers, nameless other women, just like Esther, are working tirelessly and silently to care for the living victims of maternal death. Their work is the loving sacrifice that embodies the very spirit of motherhood.

Each time you share this Global Mom Relay piece on Facebook, Twitter, or Email, or donate $5 or more through clicking on the above graphic, a $5 donation (up to $62,500 per week or $125,000 every two weeks) will be donated by Johnson & Johnson and the Bill & Melinda Gates Foundation to the Mobile Alliance for Maternal Health(MAMA). Join us by sharing it forward and unlock the potential for women and children around the globe. For more information, visit www.unfoundation.org/globalmomrelay. The United Nations Foundation, Johnson & Johnson, BabyCenter, The Huffington Post, and the Bill & Melinda Gates Foundation created the Global Mom Relay, a first-of-its-kind virtual relay with a goal of improving the lives of women and children around the globe.