The second Internet Governance Forum concluded here in Rio de Janeiro recently following four days of intensive debate about the current state and the future direction of the net. 1,500 participants from around the world attended this UN-sponsored gathering that including veteran Internet hands like Vint Cerf and Bob Kahn as well as government, industry and non-profit movers and shakers.

Though not a decision-making body, the IGF instead is an example of a new kind of "multi-stakeholder" discussion format that can be as wild and unwieldy as the World Wide Web itself, yet may prove to be just the kind of "soft Internet governance" that some here argued is needed. 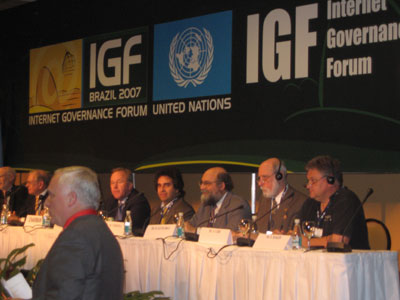 There was spirited debates on security, access, openness, diversity and the critical infrastructure needs of this ever expanding medium. What was unique about this gathering was the intermingling of top government officials (U.S. Ambassador David Gross was the senior Administration representative), industry leaders and a large contingent from the NGO sector. The online safety community managed to get child protection issues onto the agenda in a number of forums and proposed the creation of a "dynamic coalition" -- IGF speak for a special interest group. Even the U.N. Secretary General sent a message emphasizing the "strong focus on child protection" at this year's event.

The final plenary session on emerging issues brought with it some strong exchanges between speakers like Andrew Keen, who argued that anonymity on the net has a corrosive effect on building community and collaboration. Folks for Amnesty International shot this idea down with their life and death stories of dissidents risking detection online and using the cloak of anonymous postings as their only means of expression. It was also pointed out that we urge our kids never to give out their name and other identifiable information online. In other words, to be and remain anonymous.

Representatives from Africa reminded the hyper-wired participants that 95 percent of the continent remained disconnected from the Web. Access remained their number one issue and is likely to be for some time to come.

The environmental debate broke into discussions for the first time at the IGF with advocates pointing out the gross energy use of all these power hungry servers, laptops and digital devices. Others pointed out that with fast and reliable broadband, more would be able to work from home and save the planet from unneeded commuting.

Bob Pepper of Cisco promoted the idea of using valuable spectrum, currently taken by analogue broadcasters in many developing countries, to switch to broadband wireless use when a switchover to digital occurs, as it will in the U.S. He also hoped we would avoid counter productive legislation like rules against voice over internet protocol (VoIP) or extending broadcasting rules to online video.

Much was made of the borderless nature of this new medium and how this makes national regulation so difficult. Vint Cerf suggested we might need to evolve a "Law of the Internet" similar in nature to the Law of the Sea. While waiting for that to emerge, he also suggested that we needed a much stronger focus on the responsibility of users, particularly amongst younger users on the wildly popular social networking sites.

So as the curtain came down here in rain soaked Rio, regulators, business folk and activist alike, left wondering where all this will lead us. Some, particularly in the U.S., remain cautious and suspicious that some governments remain committed to enacting onerous laws on the Web. Others wondered how ordinary users would respond to calls for more media literacy to move some of the responsibility for what happens online to the users themselves. And who knows what technical innovations and strange new digital meeting places and mash-ups will emerge in the next 12 months before the IGF meets again in December 2008 in India.