My speech to the 1st Roundable of the 3rd Financing for Development Conference, Addis Ababa. 13th July 2015 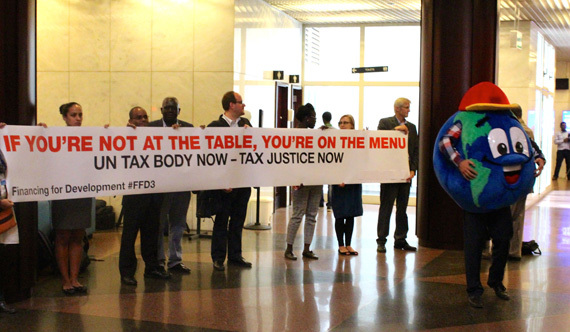 Thank you for the opportunity to speak today.

As I prepared, I refreshed my memory of the Monterrey Consensus and action plan. Looking at it in today's world, it could be a treasured relic from a bygone era. In this document, there is not just a sense of global partnership, but a strong sense of global justice too.

Global governance needs recalibrating so it works in the public interest of all the world's citizens - not just for the few.

Currently we're way off the mark:

One billion people - one in seven of us - live in poverty.

Extreme inequality is spiralling out of control, both within and between developed and developing countries, as on current trends the richest 1 per cent will own more than half the world's wealth by 2016.

But we can change this. I am going to focus on one specific policy area which, if we get right, will be transformative. That is TAX - a word we should learn to love not hate - if done right, tax is an investment with a high return, and not a personal or business loss.

A tax system is important because of what it can pay for, but also for how it works. When we pay taxes we expect something back from the state; it strengthens the relationship and accountability between us and our governments. It also pays for what private finance shouldn't: our needs for healthcare, education and social security.

Developing countries can make great strides towards more progressive and effective taxation and spending through action within their own borders. But the damage caused by exemptions, loopholes and tax havens requires action beyond national borders - it requires international action and cooperation.

Developing countries rely more on corporate taxation than advanced economies. It comprises a significant share of total tax receipts - around 16 percent on average - in low-income and lower middle-income countries, compared to an average of 8 percent in high income economies.

Despite this, currently there exists no truly international body where all countries can negotiate tax rules and norms. There is nowhere to drive through the reforms that would make tax systems consistent with the public interest of the whole world rather than the public interest of specific countries and their vested interests. As I have said before, 'It's absurd that there are international organizations for trade, health and football, but not for tax.'

Oxfam, along with many allies in civil society, firmly believe that the time has come for the creation of an intergovernmental tax body. It should include all countries as equal members and have the mandate and resources to reform international corporate taxation, and to ensure tax cooperation between governments.

This is the challenge I wish to set to you all.