A new study more accurately reflecting "the actual lives of the poor" has been released, and the numbers are not worth celebrating.

According to the Global Multidimensional Poverty Index 2014 produced by the Oxford Poverty and Human Development Initiative, roughly 1.6 billion people are living in poverty around the world -- about 400 million more than what the World Bank claimed in 2010.

How could such a drastic discrepancy exist?

While there's no easy way to quantify poverty, the initiative -- in its fourth year doing so -- considered several factors instead of following the World Bank's more simplistic method of tracking those who make less than $1.25 a day. It examined access to health care, education and living standards (instead of solely income) and analyzed regions on a more localized level, as opposed to considering countries as a whole.

In order for the index to deem an individual "in poverty," he or she must be deprived in multiple indicators simultaneously. A person is classified as poor if the indicators in which he or she is deprived add up to at least 33 percent.

Here are some facts to note from the index:

Niger is the country with the highest percentage of poor people, at 89.3 percent. Nepal is the most improved country in combating poverty, as its portion of poor residents dropped from 65 percent to 44 percent in a five-year period.

In India, 343.5 million people -- 28.5 percent of its total population and more than that of the U.S. -- are categorized as "destitute," or as having two or more childhood deaths in one's household. However, from 1999 to 2006, India experienced a drop in multidimensional poverty. 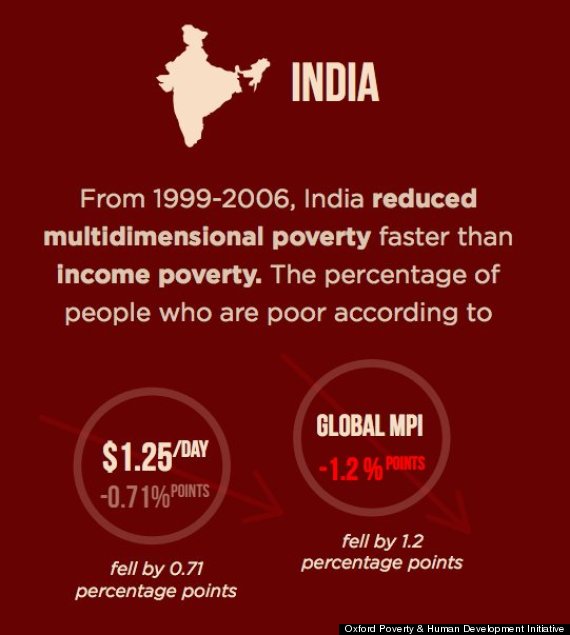 Correction: An earlier version of this story claimed a 2010 poverty study was produced by the U.N., while that data reflects findings by the World Bank. The story has been updated.

To learn more about the Oxford Poverty and Human Development Initiative, visit the organization's website.