HONOLULU (Oct. 9, 2014) -- In many countries, couples are having fewer babies - or none at all - leading to older populations and widespread concern about declining tax revenues, higher spending on pensions and health care, and possibly economic decline. But a new global study from the East-West Center in Hawaii and the University of California, Berkeley has found that in much of the world, including the United States and much of Europe, it can actually pay to have fewer children.

Research teams in 40 countries correlated birth rates with economic data and concluded that a moderately low birth rate - slightly less than the "replacement rate" of 2.1 children per woman - can actually boost a country's overall standard of living. Governments generally favor higher birth rates to maintain the workforce tax base needed to fund pensions, health care and other government benefits for the elderly, but "higher fertility imposes large costs on families because it is they, rather than governments, that bear most of the costs of raising children. Also, a growing labor force has to be provided with costly capital such as factories, office buildings, trucks, and houses to live in," said UC Berkeley demographer Ronald Lee.

"Instead of trying to get people to have more children, many governments should adjust their policies to accommodate inevitable population aging," added Lee, who co-authored the study -published Oct. 10 in the leading journal Science - with economist Andrew Mason, a senior fellow at the East-West Center.

Lee and Mason co-direct the National Transfer Accounts project, which studies how population changes impact economies across generations. Working with co-authors worldwide, they based their calculations for the study on finding the birth rate and age distribution that strikes the best balance between the costs of raising children and of caring for the elderly.

Their results challenge previous assumptions about population growth. For example, they found that the U.S. birth rate is nearly ideal for overall standard of living, but that birth rates in parts of Asia and Europe are so low that they reduce living standards when public and private costs are included.

"A more complete accounting of the costs of children shows that in only a few countries in East Asia and Europe should governments try to encourage people to have more children," said the East-West Center's Mason, who is also an economics professor at the University of Hawaii-Manoa. "In the United States and many other high- and middle-income countries, people are having about the number of kids that are best for overall standards of living."

In many countries higher birth rates would improve public finances (Map 1) but not standards of living (Map 2). 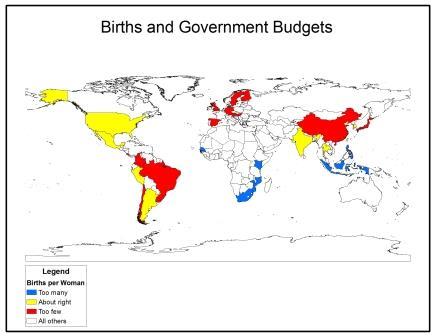 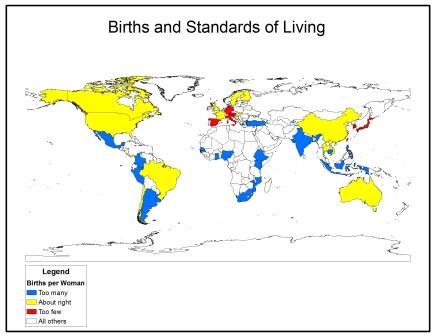