NEW YORK -- Inside the United States, a long and largely ineffective campaign to eradicate drugs is gradually evolving into acceptance of one key substance -- marijuana -- as states increasingly move to legalize its use. But outside national borders, the American-led war on drugs continues, bringing charges from participants that it is sowing violence and strife for little discernible gain.

"To the extent that our foreign relations should be for the purpose of improving relations with other countries, spending money on drug enforcement really doesn't do that. It certainly doesn't do that effectively," said Sean Dunagan, a drug war critic who previously served in Guatemala and Mexico for a combined five years as an intelligence analyst for the Drug Enforcement Administration.

The U.S. spent nearly $2 billion abroad in the 2013 fiscal year, much of it sent directly to foreign law enforcement budgets through the State Department. DEA agents like Dunagan are the face of that massive push overseas to fight the war on drugs.

The DEA's presence in some countries rivals that of a mid-sized town's police force: 112 agents are stationed in Colombia, 101 in Mexico, 79 in Afghanistan, 49 in Peru and 45 in Thailand. Many more countries have much a smaller group of agents, in places as varied as Switzerland (3) and Tajikistan (4).

The agency has 793 agents overseas in 68 countries, according to a Freedom of Information Act request by The WorldPost. In comparison, the U.S. Agency for International Development, the primary organization for delivering U.S. civilian foreign aid, said that it has 1,622 service officers and agency watchdogs posted abroad.

But the DEA agents working around the world are achieving mixed -- at best -- results. In Afghanistan, opium production reached a new record in 2013. In Latin America, cocaine production is down and places like Colombia that were once racked by drug-related violence have become more stable -- but the presence of cartels has ballooned into new frontiers like Peru, Bolivia and Mexico. The average price of cocaine, heroin and marijuana all dropped in the United States between 1990 and 2007, meaning that supply has not been constricted enough to drive up the cost.

Dunagan said he could have worked for the DEA abroad for another 40 years without achieving a victory in the war on drugs. He believes it is time to rein in the agency's vast, globe-spanning presence. 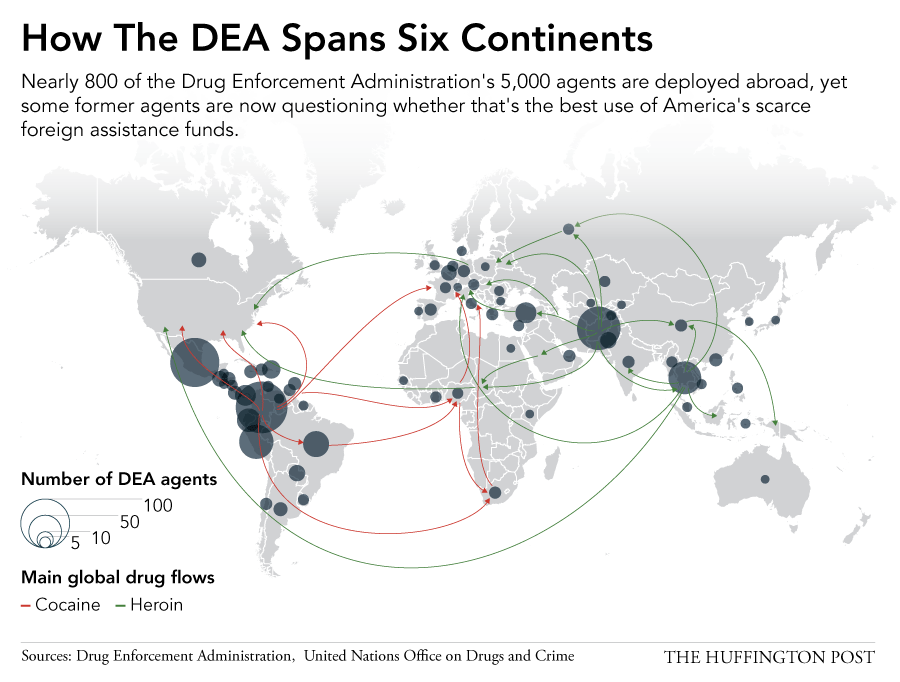 DEA agents abroad face all of the same difficulties as those at home -- but their work is made more complicated by delicate questions of sovereignty that are decided on a country by country basis: whether they can travel freely, interview sources, carry guns, and take an active part in drug investigations.

Agents' experiences overseas are "about as varied as the countries are that we're posted in," said David Wilson, the executive director of the Association of Former Federal Narcotics Agents. A former DEA agent himself, he served from 1974 to 1978 in Vancouver, Canada, and frequently traveled abroad as the agency's deputy chief inspector.

"Some countries are very open and welcoming, some not so much. Others it changes over time," Wilson said.

The changes have been coming quickly over the past decade and a half, as the agency increasingly took on a counterterrorism mission after the Sept. 11 attacks, and as an anti-American brand of politics exemplified by Hugo Chávez rose in Latin America.

Chávez accused the DEA of spying on the Venezuelan government in 2005. Three years later, Bolivian President Evo Morales expelled drug agents from the country for allegedly conspiring against his government.

"Even in countries as large as Mexico, people feel like their sovereignty is put in the hands of law enforcement operatives from another country, and DEA agents call the shots," said John Walsh, who studies drug policy at the nonprofit Washington Office on Latin America.

Mexico residents were outraged earlier this month when the newspaper El Universal documented allegations that DEA agents cut an immunity deal with an informant at one drug cartel to receive information on another.

The critics are even louder in Honduras, where a joint DEA-Honduran drug raid in La Moskitia in 2012 apparently went horribly wrong, leading to four deaths and calls for the DEA to leave the country.

Dunagan described his time in neighboring Guatemala, where more than half the population lives below the national poverty line, as "eye-opening."

"It really struck me that there's a sharp contrast between what people in Guatemala need and what we're sending," he said. "Guatemala's not really benefiting by us sending helicopters there to chase down planes flying from Colombia ... but that's so much of what we do and what our involvement there is."

Dunagan is particularly concerned about the rise of the Foreign-deployed Advisory Support Teams, commando-style units first introduced in Afghanistan to fight opium production that have now been deployed in Latin America. It was a FAST team involved in the incident in Honduras, and members of another FAST team were killed in one of the agency's darkest days, a 2009 helicopter crash in Afghanistan.

More agents are deployed in Afghanistan than any other country outside Latin America -- but in recent congressional testimony, an inspector general said the state of counternarcotics efforts in Afghanistan is "dire with little prospect for improvement in 2014 or beyond."

There is "frustration, of course," said Wilson, who remains faithful to the agency's mission. "But hopelessness, no, we wouldn't do it if we didn't feel there was some chance of success."

Agency skeptics like Walsh, on the other hand, say it's time for a new approach. He suggested that the U.S. should focus on providing opium and poppy farmers with alternative income sources through economic development, and should have law enforcers focus on the worst actors -- the ones who kill the most innocent people -- instead of targeting the biggest drug payloads.

"It is possible for enforcement to have a more nuanced and constructive goal," he said. "Through smarter and strategic enforcement, we can shape the way the criminal market actors behave to try to minimize the worst and most noxious aspects of these markets."

With reporting by Jason Cherkis. Infographic by Jan Diehm.