The skeptics are squawking again, their blogs achatter with talk about solar variability and sunspots. According to them, anybody who is anybody in climate science now knows the sun is to blame for global warming. Even the New York Times recently wrote about the low level of solar activity this year and the possibility of a coming ice age. Can any of this be true?

Of course the sun affects climate and there is little doubt that variations in the sun's energy (called the total solar irradiance or TSI) have caused significant climate swings in the past. For example, the so-called Little Ice Age, an anomalously cold period that peaked in the 1600s, may have been caused by an extended interval with low TSI (see here).

But just because changes in TSI have caused climate variations in the past does not mean they are the cause of global warming today. If variations in TSI were responsible for the increased global temperatures of the past few decades, then there would be a corresponding increase in TSI itself. Has there been? We can answer this question in a very straightforward way - not with models or theories but with actual data.

Examining the Data to See How Much Solar Variations Affect Climate

Since 1978 we have monitored the TSI using a series of instruments mounted on satellites. To determine if there has been a net change in TSI over this 30-year period, one must "stitch" the data from each of these instruments into a single, composite record. (I should note a complicating factor here: a gap between 1989 and 1991 with no measurements at all.)

To date, two such composites have been produced: one by scientists at the Physicalisch-Meteorologishes Observatorium Davos (PMOD) and the other by scientists involved with one of the TSI-measuring instruments, the Active Cavity Radiometer Radiance Monitor (ACRIM). Each used a different method to bridge the data gap and each produced slightly different results. 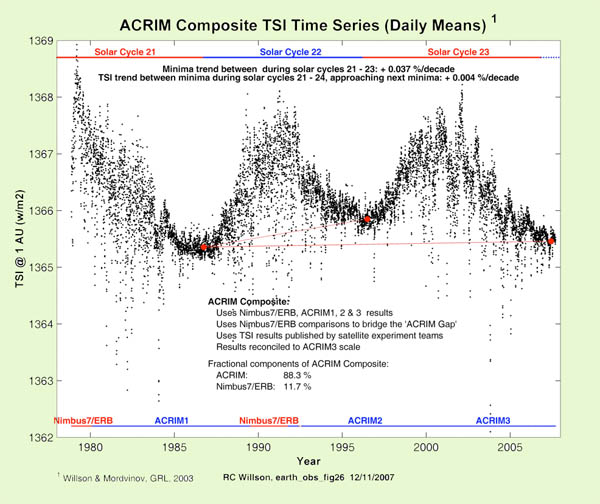 The composite from the ACRIM group is shown here. Most apparent is the cyclic pattern in TSI with maxima and minima occurring approximately every 11 years. This is the so-called 11-year sunspot cycle - which will be the subject of the second post in this 3-part series.

There can be little question that the ups and downs in TSI over any given cycle do affect our climate. But these ups and downs are relatively small -- only about 0.3 percent, causing perhaps a 0.15 degree Fahrenheit swing in global temperatures from solar minimum to solar maximum (see how solar variability affected 2007's temperatures). By comparison, the net rise in global temperatures since the Industrial Revolution has been just under 1.5 degrees Fahrenheit, ten times that amount.

Solar Variations: Too Tiny to Matter

But to understand the role of TSI in global warming, we must look at the long-term average -- that is, not the variations within an 11-year solar cycle but the net variations over multiple cycles. As the graphic here indicates, the ACRIM composite finds that over the past three solar cycles, TSI has increased about 0.004 percent per decade. It's an increase but a tiny one -- much smaller than the variations in TSI from peak to valley in any given solar cycle and far too minuscule to explain the warming seen in the last 30 years. By comparison, the PMOD composite finds a net decrease in TSI by about 0.012 percent per decade.

Some discussions out there make much ado over the differences between the ACRIM and PMOD composites. But for the purposes of this discussion, the differences are moot and the conclusions the same. The ACRIM web site puts its well: "Both time series demonstrate no significant trend over the two decade period separating the first and third solar activity minima." In other words, one can not attribute the lion's share of global warming in the last 30 years to changes in the sun's energy output. This conclusion is not based on a model or solar theory; it is based on the facts - data pure and simple.

In the next post in this series, we turn our attention to sunspots.

Dr. Bill Chameides is a member of the National Academy of Sciences and the dean of the Nicholas School of the Environment at Duke University. He blogs regularly at www.thegreengrok.com.