There is really no way around it: Thanks to climate change, sea levels are rising. A huge question on the minds of many is, what does this mean for America? Will sea walls and city planning protect major metropolises, or are we bound to lose some national gems? Unfortunately, the latter is a significant possibility. Read on for 14 U.S. cities that could be devastated over the next century due to rising tides. 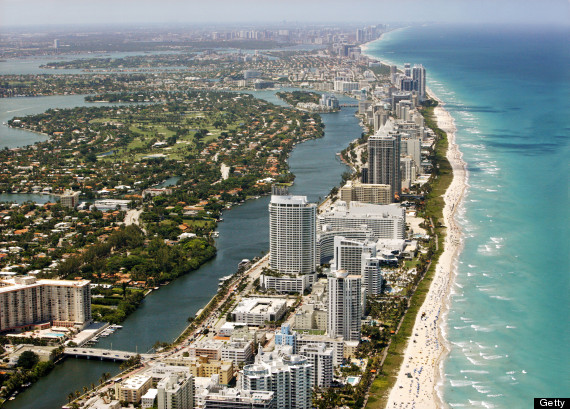 Is South Beach your go-to summer spot? Do you vacation at the Fountainbleu? Well, climate change might force you to kiss America’s party city goodbye. In a Rolling Stone article written earlier this summer, Jeff Goodell creates a pretty terrifying hypothetical of what a dystopic future could look like in Miami:

With sea levels more than a foot higher than they'd been at the dawn of the century, South Florida was wet, vulnerable and bankrupt. Attempts had been made to armor the coastline, to build sea walls and elevate buildings, but it was a futile undertaking. The coastline from Miami Beach up to Jupiter had been a little more than a series of rugged limestone crags since the mid-2020s, when the state, unable to lay out $100 million every few years to pump in fresh sand, had given up trying to save South Florida's world-famous­ beaches.

Read more about Goodell's predictions for Miami's future, and his investigation into climate resiliency. 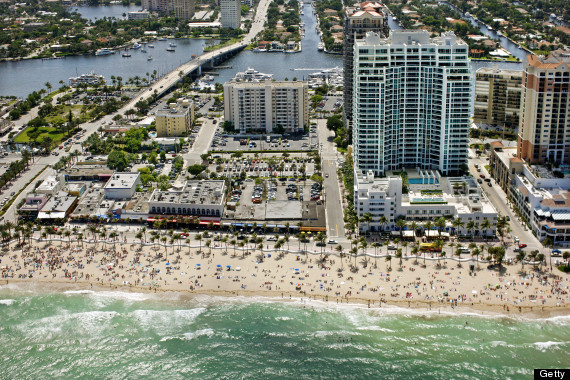 Located less than 30 miles north of Miami, Fort Lauderdale's future looks similarly doomed. Scientists also warn that long-term sea level rise that would doom Fort Lauderdale's beachfront could be "locked in" by 2060 if we don't curtail greenhouse gas emissions. Climate Central researcher Benjamin Strauss adds that "even if we could just stop global emissions tomorrow on a dime, Fort Lauderdale, Miami Gardens, Hoboken, New Jersey will be under sea level." 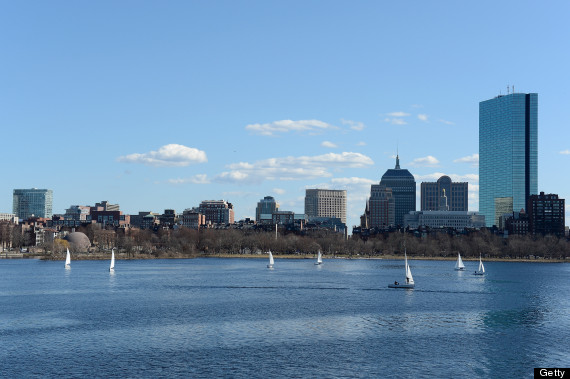 If Hurricane Sandy struck Boston during high tide, 6.6 percent of the city would have been flooded. Water would have reached the steps of City Hall, according to a piece in The Atlantic. Within 100 years, that could become the new normal, twice a day. Goodbye Boston, even the Yankee fans will miss you. 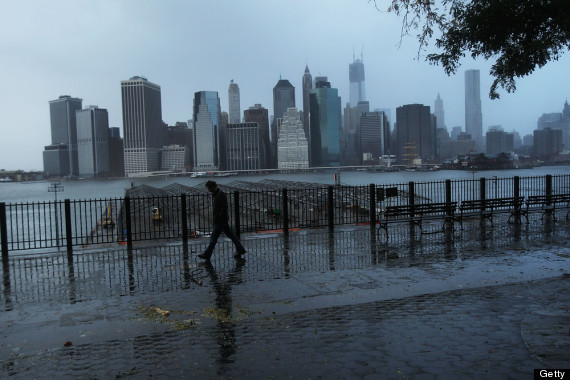 Probably one of the least surprising entry on this list, Hurricane Sandy gave New Yorkers just a taste of what might happen to their city over the next hundred years. According to new data released in June, sea level could rise by 4-8 inches in New York over just the next TEN years. A terrifying interactive from the New York Times shows that a five-foot rise in sea level would submerge La Guardia airport, many of the barrier islands, and a significant portion of Manhattan. 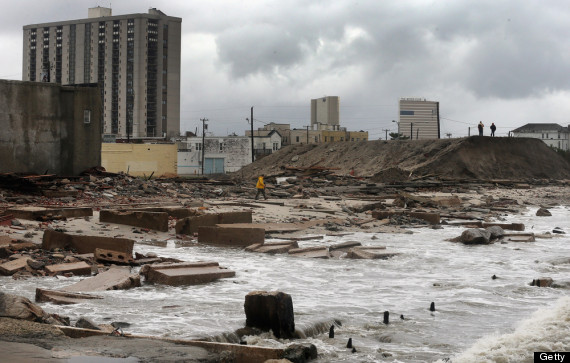 Some of the most shocking images from Hurricane Sandy came from the Atlantic City boardwalk. The place known for carefree debauchery lay in shambles of wooden planks and sand. Was the devastation a sign of things to come? This report suggests that Atlantic City could be a major casualty of sea level rise. 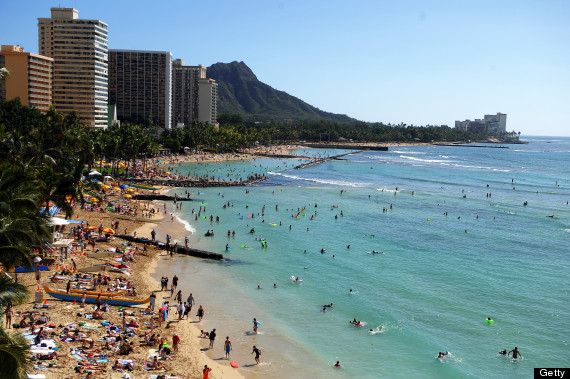 Sea level does not rise evenly. While that may mean less of a rise for some places (like those near Greenland) some places will be inundated with much higher tides than others. Like Hawaii. According to a study released in February, the beautiful islands are likely to be hit the hardest by rising sea levels. Some experts claim that just a one INCH rise could cause shoreline to move up eight feet. A one-foot rise would cause the beach to move 100 feet inland. Just imagine what happens to Honolulu when the sea rises by 5 feet. 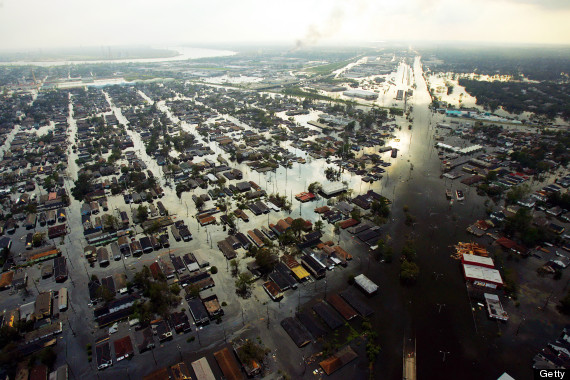 According to The Lens, a Louisiana non-profit news site, Louisiana might be facing the highest sea level rise worldwide. This does not bode well for the low-lying Big Easy, which could be immersed with 4.3 feet of water by the end of the century. Mardi Gras, the French Quarter and NOLA’s jazz scene may all be a thing of the past. 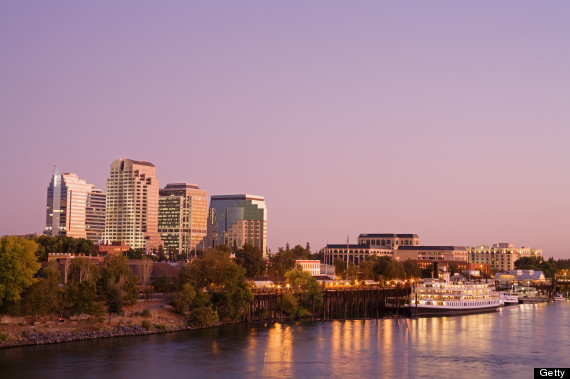 Although Sacramento is not coastal, it is by no means safe from sea level rise. Thanks to the many waterways surround the area, including the flowing Sacramento river, a five foot sea level rise would inevitably affect California’s capital city. According to the Sacramento Bee, even a moderate rise of two feet could flood a number of neighborhoods. 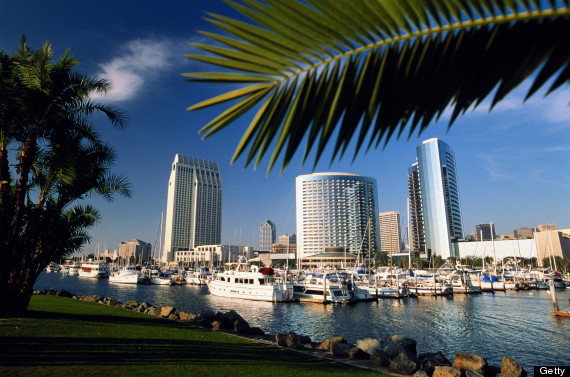 The outlook for San Diego is pretty grim when it comes to sea level rise. Local news station KPBS reports that the city could see rising tides of 18 inches to four feet by the year 2050. Nickolay Lamm, an artist who has made a number of shocking and beautiful climate change images, created a scary rendering of what San Diego could look like in a future of rising seas. 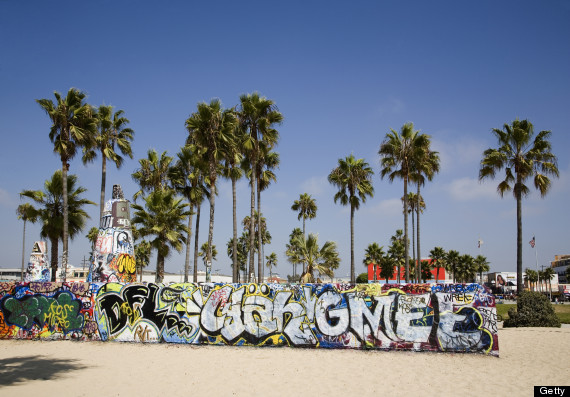 According to a report released by the National Research Council, Southern California is in for quite the climate change fiasco. Acres of beautiful coastline will be engulfed by rising seas, including Long Beach, Venice and Santa Monica. 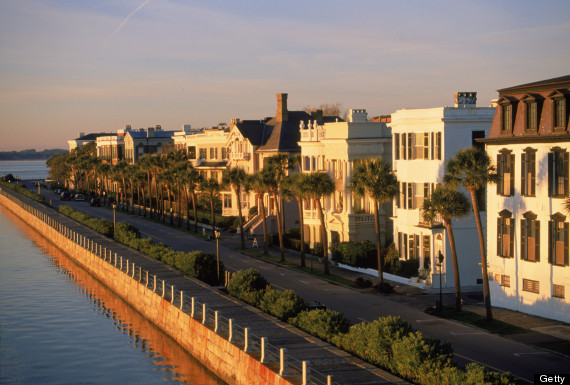 In a 2007 article, the Charleston City Paper took a very similar approach to Goodell’s Miami doomsday scenario, and painted a picture of what could happen to the city over the next 100 years:

The boat drifts past the ruins of St. Michael's Church, with its gaping, glass-toothed windows and collapsed steeple, as the tour guide drones on about its rich history and the last services held there back in 2053 — the church's 300th anniversary — before the rising waters drove its last parishioners to higher ground. The guide reminds you of the great global climate change exodus that began in earnest that decade, with nearly a billion refugees from coastal regions everywhere on top of untold millions of climate-related deaths.

Pretty terrifying. According to the paper, even the best-case scenario will probably wipe away Charleston’s beautiful beachfront mansions and pristine beaches. 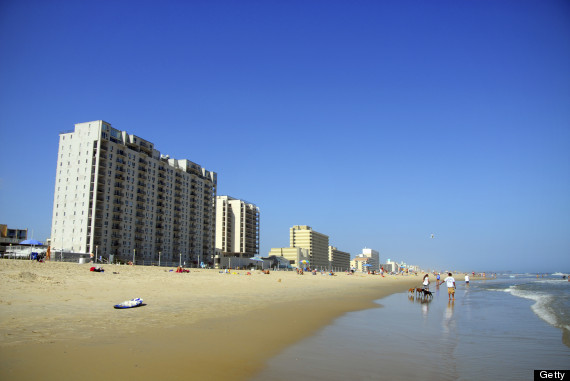 Virginia Beach’s pristine coast could be obliterated in the next 50 years. In fact, NOAA says that it's the most threatened area for sea level rise of its size after New Orleans. According to Virginia Beach environmental administrator Clay Bernick, there are too many warning signs to ignore the science. "I wouldn’t put it in the category of fear," he told The Washington Post, but stressed, “You’ve got multiple factors with flashing lights saying, ‘Okay, guys, what are you going to do?'”

A word to the wise: If you haven’t made your way down to the Hampton Roads area, you might want to make the trip before it is too late.

James Rufo Hill, a climatologist with Seattle Public Utilities, knows Seattle could be in dire trouble by the year 2050. City neighborhoods like Georgetown, South Park, Harbor Island, Interbay and Golden Gardens could be flooded daily during high tide in the next few decades. Check out the video to see Hill explain how climate change will affect the notoriously rainy city. 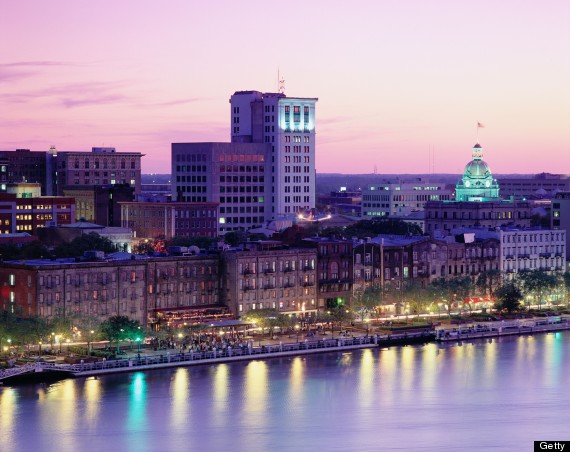 Savannah, a beautiful southern city only a few miles from marshlands, has a lot to lose if the sea rises by only three feet. Check out this shocking image created by Climate Central to see exactly how much of the city could turn into an underwater wonderland.