Part of a series investigating the complex links between human, animal and environmental health: The Infection Loop.

Darren Collins doesn't know life without Lyme disease. He was just 11 months old when he came home from Wisconsin's Mauthe Lake Campground pasty white, lethargic and running a fever of 105. Darren's flu-like illness eventually subsided, but a host of other troubling Lyme-related symptoms -- stomachaches, irritability and concentration problems -- have since plagued the boy, now 10.

"He's like Jekyll and Hyde," says his mom, Kristin. One moment Darren could be "happy and smiling," and the next in a "complete rage."

"He scores perfect on a spelling test one week, then gets every word wrong the next week," adds Kristin, a nurse in Waukesha, Wisc. "He wants to know why he can't be like other kids." 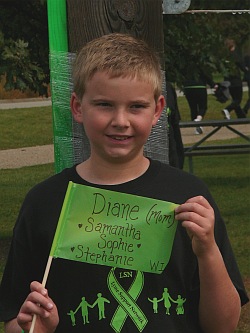 Darren Collins holds up a flag with the names
of another family afflicted by Lyme. Sisters, Sophie
and Stephanie, frequent his chat room; both were
too sick to participate in the fundraiser walk.

For now, Darren is settling for finding kids like himself, a group that has grown significantly over the decade since he contracted the disease from a tick bite. And according to experts, there may be a link between these increases and a changing climate.

A quarter of all Lyme disease cases are among children. At highest risk: kids ages 5 to 14, who are more likely to play outdoors and close to the ground, where ticks are ready to pounce. Darren recently launched an online chat room catering to this group. Every Friday night at 8 p.m. Central, he now talks online with nearly a dozen new friends who log on from as far away as Kentucky and Australia, all living with Lyme.

Lyme is just one of a lengthening list of emerging infectious diseases that are soaring in North America. Experts say that increasing temperatures and altered precipitation patterns that accompany climate change are already playing at least a partial role in the spread and intensity of zoonoses -- infectious agents that begin in animals and account for an estimated 75 percent of all newly emerging diseases. Cases of West Nile virus reported to the CDC, for example, rose from 21 in 2000 -- a year after its arrival in New York City -- to more than 1,000 in 2010.

Like Lyme disease, most zoonoses require an intermediary tick, mosquito or other insect to transfer the virus or bacterium from an animal to a human. Because insects are cold-blooded, they are highly sensitive to outside conditions: A few degrees or inches of rain can significantly enhance or hamper their ability to survive, reproduce and effectively pass on a parasite.

"There are lots of factors that contribute," says Ben Beard, a climate change expert with the CDC, highlighting the influence of international travel, wildlife management and the suburban lifestyle on emerging infectious diseases. "But climate disruption and change clearly have an impact."

OF MICE AND MEN ... AND ACORNS

For more than 20 years, Rick Ostfeld has been studying small mammals, ticks and tree seeds, trying to untangle some of the complex interrelationships that give rise to Lyme disease. Sure enough, he's found that acorns provide a wonderful winter food supply for white-footed mice, which in turn are a favorite meal of blood-thirsty black-legged ticks.

"Acorn abundance gives rodents a jumpstart on breeding," says Ostfeld, an ecologist at the Cary Institute of Ecosystem Studies in Millbrook, N.Y. "By the next summer, mice numbers are through the roof."

Scientists are unsure what causes spikes in acorn production, although studies suggest that plants produce more seeds with warmer temperatures and higher levels of carbon dioxide. "Long term, we can probably expect to see more tree seed production, including acorns," says Ostfeld. "That would influence how frequently we get these terribly risky years."

The unprecedented acorn crop across the Northeast and mid-Atlantic spurred a mouse boom in 2010, and subsequent low acorn year in 2011, which Ostfeld anticipates will make for a "perfect storm" in 2012. Over the next couple months, as baby ticks wake up and look for a blood meal, there will be few mice to feast on. The next-best thing: humans.

This year's mild winter may make matters even worse. Ostfeld says that it wouldn't surprise him if Lyme-carrying ticks come out as early as this month.

Kristin's husband plucked a tick off himself just last week. Dr. Jared Zelman, an emergency room doctor at Sharon Hospital in Connecticut, has already seen cases, too. "Medical care providers in this region need to have their antennas very high," says Zelman, also a physician at two private schools in the area, long a hotbed for Lyme disease and other tick-borne infections.

Warming temperatures may not only influence the intensity of tick transmission, but may also affect where ticks choose to live, according to Nick Ogden, a zoonoses expert with the Public Health Agency of Canada. While regions of the southern U.S. may actually turn inhospitable for ticks due to overly hot temperatures, other parts of North America may become newly suitable.

A study published in March by Ogden and his colleagues suggests an area of eastern Canada habitable by ticks is expanding -- from an estimated 18 percent of the population affected in 2010 to more than 80 percent by 2020. Over the past 60 years, average annual temperatures in Canada have increased by 2.5 degrees Fahrenheit (1.4 degrees Celsius). "We've had a prediction of increasing risk, but now we're seeing it," says Ogden.

Of course, Lyme isn't the only disease heading north.

Most kissing bugs in the U.S. "eat and run," says Lori Stevens, a biologist at the University of Vermont. Species of the creepy crawler in Central and South America, on the other hand, are known to take leisurely meals.

"They poop while eating," Stevens says, adding that these species are also more likely to venture indoors.

The blood-suckers get their name from their tendency to bite people around the mouth, usually at night. As a result, the bug's feces is more likely to make its way into its victim, often escorting the parasite that causes Chagas disease, a potentially life-threatening disease found mainly in Latin America.

Infants and young children appear most susceptible, says Stevens, likely because they are less able to move and thwart bugs in their crib.

Stevens and her colleagues have collected hundreds of kissing bugs from around the U.S. More than half, they've found, are infected with Chagas. Further, as they reported in a small study published in March, nearly 40 percent of bugs had fed on human blood.

Chagas is a silent killer. Fewer than 10 percent of people infected have initial symptoms. It's usually not until 10 to 20 years later that the disease takes its toll -- on the heart. Not surprisingly, a connection between cardiovascular problems and a bug bite received decades prior is rarely made by patients or doctors.

The CDC estimates 300,000 undiagnosed cases of Chagas in the U.S., many of which are in immigrants from Latin America.

Meymandi has seen two 17-year-old patients in the last year and a half with infections identified by blood donation screenings. One boy caught Chagas during a round of golf; the other while mountain biking. Neither teen was of Hispanic decent or had traveled outside the U.S.

While these kind of outdoor infections continue to occur, the bigger concern is whether the more dangerous, domesticated kissing bug species of Central and South America is moving north. Because the insects vary in their preferred temperature and humidity, some researchers worry that climate change could help along the defecating-during-mealtime bugs.

They have the same concerns about mosquitoes implicated in West Nile Virus, among other lesser-known zoonoses.

Recent research in California found that hot temperatures predict greater West Nile transmission: The virus can both replicate and travel from the gut to the salivary glands faster with warmer weather, allowing a mosquito to start infecting people sooner, explains Aaron Brault, another zoonoses expert at the CDC.

Of increasing concern to the CDC is a mosquito recently arrived from overseas. The Asian tiger mosquito is particularly sensitive to climate and capable of transmitting not only West Nile, but also devastating diseases of the developing world, including dengue fever (already reported in Florida and Texas) and chikungunya.

"It's only a matter of time," says the CDC's Beard. "We need to focus on what we can do about it now: surveillance, preparedness and prevention."

"When a disease occurs in a new area, we need to be quick to recognize and respond," Beard says. "The most important thing is to continue to invest at national, state and local levels."

Several states and local governments have developed preparedness programs to address the spread of infectious diseases associated with climate change. But as The Huffington Post reported in February, federal funds for such surveillance and diagnosis measures are shrinking.

John Brownstein, a pediatrician and researcher at Children's Hospital Boston, has been using climate change forecasts to project where Lyme might appear next. In 2005, he predicted the tick-borne diseases infiltration and spread in Canada that we are seeing today. With federal funding, he and his team are continuing to look at the effects of climate change on the distribution of a range of infectious diseases, including dengue. They're using what he calls "digital disease detection." The public can help by self-reporting diseases online or via a mobile application.

Meanwhile, other researchers are discovering how surveillance and control of infections in dogs could go a long way in collaring both Lyme and Chagas.

Rising risks also mean that "parents and pediatricians need to be vigilant," says Beard. In the case of Lyme, that might mean encouraging kids to wear insect repellent, tucking pants into socks, daily tick checks (for both people and pets), walking in the center of trails, avoiding bushy areas with high grass and showering after being outdoors. The CDC's website shares further suggestions, including how to create tick-free zones by putting playground equipment in the middle of the yard rather than on a forest fringe, where ticks thrive.

"I hate to see people not let their kids play in the woods because of the threat," says the Cary Institute's Ostfeld. In addition to preventative measures, which he uses with his own kids, he notes the importance of being aware of Lyme disease symptoms: muscle aches, lethargy and fever outside of flu season.

"Early treatment, when you suspect Lyme, is curative," Ostfeld says.

Kristin Collins knows that if Darren had received a diagnosis and treatment early, spelling tests and simply being a kid would be easier for him today. Now, she is doing everything she can to keep other children and their families from suffering the same. As the vice president and medical liaison for the Wisconsin Lyme Network, she is handing out Lyme test kits "like candy," she says, while also advocating for the training of more doctors capable of diagnosing and treating the disease.

"I know hundreds and hundreds of families dealing with this," says Collins. "It's heart-wrenching. It's scary. It's everywhere. Our kids are at a huge risk."