This winter has set record lows in many states, a fact the editor of our conservative local newspaper, and others of his ilk, must be relishing. "There's no global warming," I can imagine him crowing. "It's all a liberal hoax." Such distorted logic reveals either an appalling ignorance of the meaning of "average," or a cynical attempt to intentionally mislead. 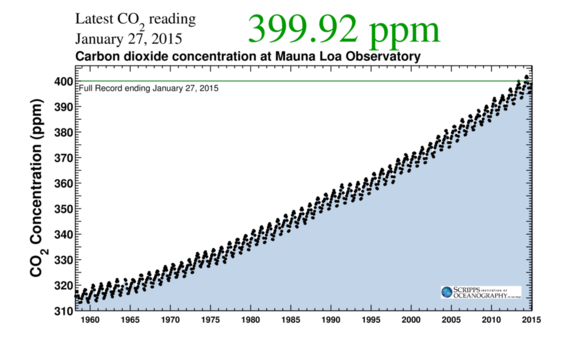 Truth is, the names bestowed on various scientific phenomena are often whimsical in origin. Nobel laureate (1969) Murray Gell-Mann, for example, appropriated the term quark -- one of three elementary particles and fundamental constituents of matter -- from a nonsensical line in Finnegan's Wake: "Three quarks for Muster Mark!"

Then too, the term Big Bang originated not from a scientific paper, but from a 1949 BBC broadcast. Astronomer and atheist Fred Hoyle coined the term to deride an hypothesis by the late Belgian Catholic physicist Georges Lemaitre. Lemaitre believed that the universe might have originated from a singular event, which he termed the "primeval atom." Hoyle's term of derision stuck instead.

Sometimes a whimsical term -- like black hole -- fits the phenomenon well. And sometimes it's an annoying distraction. Most physicists rue the day the Higgs Boson was dubbed the "God particle."

The trick for scientists is to find a term that conveys the essence of the phenomenon while remaining accessible to the general public.

Which brings us back to global warming. Does the term help or hinder?

Imagine driving a car with a front wheel out of balance. At moderate speeds, the car shimmies.At high speed it shakes. And at too high a speed, the driver loses control.

By continuing to burn fossil fuels, pumping ever more carbon into the atmosphere, we humans are stomping ever harder on the climate accelerator. If we don't soon take our foot off, the climate, as we know it, will spin out of control.

The National Oceanic and Atmospheric Administration (NOAA) began measuring atmospheric carbon dioxide (CO2) in 1958. Since then annual mean CO2 concentration has risen steadily from 315 parts per million (ppm) to 400 ppm, as shown above in the "Keeling Curve." In 2001 George W. Bush appropriately honored its originator, Scripps Institution scientist Charles David Keeling, with the Presidential Medal of Science.

As a direct consequence of rising atmospheric CO2, global mean temperature has risen about 1.4F since 1880 and is projected to rise another 4-10F by the turn of the century -- unless the world weans itself quickly from fossil fuels. And wean we must, because the upper limits of this projection are incompatible with life as we know it on planet earth.

But climate destabilization has many more faces than "global warming." Here are just a few:

In the same way that an unstable automobile wobbles from side to side, an unstable climate swings from extreme highs to extreme lows.

A destabilized climate also produces extremes of drought and precipitation.

We could go on and on. Reports stream in daily: from multiple disciplines, organizations, and regions of the world. Human activities -- primarily the burning of fossil fuels -- have destabilized the climate, and the trends are all in the wrong direction.

If these aspects of climate were instruments in an airplane's cockpit, then every alarm would now be going off simultaneously (to adapt an analogy from This Changes Everything by Naomi Klein).

What's in name? Everything. "Global warming" just doesn't cut what we're up against.

(The author is grateful to Doug Hendren for insights and editorial advice.)