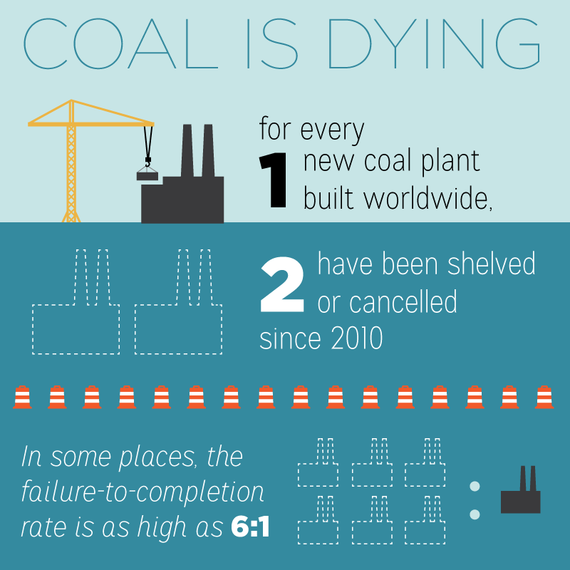 Today, the Sierra Club and CoalSwarm, keeper of the global coal plant tracker database, released a comprehensive report on the global coal pipeline -- and the news is big. The global boom in coal-fired power plant construction is going bust.

Since 2010, for every coal plant completed worldwide, two proposed coal plants have been shelved or cancelled. We have known for a while that the coal industry was facing serious headwinds -- even banks like Citi and Goldman Sachs have been warning of coal's impending decline -- but the scale of project failure should be a wake-up call to anyone who still thinks the coal industry's salvation lies in a 21st century global coal boom.

Globally, in 2014, for the first time ever, carbon emissions were flat as the world economy grew, largely due to reduced coal use and the expansion of clean energy. Even as coal use continues its rapid decline in the United States with 187 coal plants announced for retirement since 2010, thanks in large part to widespread grassroots pressure from communities demanding an end to deadly pollution, the U.S. coal industry was counting on a booming exports business to keep it afloat. But today's report shows this is simply not going to happen.

According to this new report, coal use in China declined for the first time in 2014 while the economy simultaneously grew at 7.3 percent, proving that coal is not synonymous with growth. The picture in India is even more dismal for coal companies looking to the subcontinent for salvation. There, for every one project that was completed, six were shelved or cancelled. And that coal renaissance that was supposedly going to take place in Europe? In the EU, retired coal capacity outpaced new capacity by 22 percent. Nowhere is the European shift away from coal more apparent than in the UK, where the leaders of the three main political parties recently made a joint commitment to accelerate the shift to a low carbon economy and end the use of unabated coal for electricity.

The evaporation of coal prospects overseas also buoys the work of local residents and First Nation communities as they fight to stop new coal export terminals in the Pacific Northwest and the Gulf of Mexico. These groups have been working to demonstrate the devastating effects that the proposed railway and port infrastructure would have on human health and traditional fishing. All along, activists have worked to show that these coal projects were financially untenable. This new report provides further evidence that coal industry forecasts for an insatiable coal boom in Asia were more marketing pitch than business plan, further undermining the remaining projects, as the proposed export terminals continue to fall like dominoes under the combined pressure of grassroots activism and economic realities.

But there is also a warning to accompany this good news. While larger trends are turning against coal, there are still over 1,000 gigawatts of new coal-fired generation proposed worldwide. This may not be enough to revive the coal industry in the face of accelerating coal plant retirements, but it is enough to devastate the climate and public health. To avoid catastrophic climate disruption and the global instability and human suffering that will result, we must continue building on the progress found in the report to phase out coal plants and replace them with clean energy.

With attention turning toward the COP21 climate negotiations in Paris this December, it is critical that countries commit to ending subsidies and policies that favor coal, and instead focus on cutting edge clean energy solutions that not only create jobs but protect public health. As the latest reports on carbon emissions make clear, we're moving in the right direction. Whether or not we can reach a meaningful global agreement will depend, in large part, on whether countries can continue making the progress identified in this report - phasing out dangerous, outdated, and polluting energy, while deploying the clean energy technologies of the 21st century.