Across the West, establishment parties of the right and the left are being disrupted -- if not destroyed from the inside. Within such parties, the losers from globalization are finding champions of anti-globalization that are challenging the formal mainstream orthodoxy. Thus, the traditional distinction between center-right and center-left is breaking down.

Traditional establishment parties were controlled by forces that, overall, benefited from globalization: business interests, urban and cosmopolitan elites, skilled workers, and white-collar and blue-collar workers protected by unions. Both right-wing and left-wing parties included significant minorities of workers who were losers in the globalization race but were voting for establishment parties either because they were socially and religiously conservative (ideological voters on the right) or because center-left parties were supporters of unions, workers rights and social welfare systems partially protecting the losers.

For a while, financial democratization (easy access to credit) and the buildup of excessive household leverage was the fig leaf that contained the gap between stagnating incomes and consumer ambitions of the losers.

Angry, white, religious blue-collar workers who voted Republican finally realized that their economic interests were opposite to those of the pro-Wall Street, pro-globalization GOP establishment.

But after the great financial crisis in 2008, when wage stagnation in the U.S. continued in the face of high debt ratios, the losers from globalization on both the left and the right started to get organized, represented by anti-establishment champions such as Bernie Sanders and Donald Trump.

Losers on the left in the U.S. and U.K -- where there are traditional two-party systems -- found champions in traditional center-left Labour (Jeremy Corbyn) and Democratic (Bernie Sanders) parties. In continental Europe, where multi-party parliamentary systems are prevalent, populist anti-establishment parties emerged instead -- either entirely new ones, such as Syriza in Greece or Podemos in Spain, or based on leftist splinter groups of traditional center-left parties. 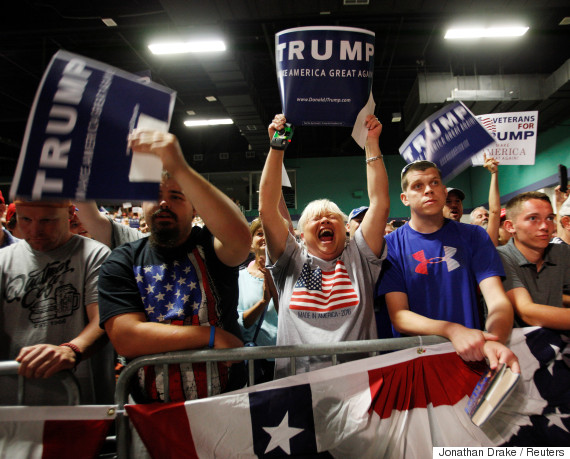 Supporters of Trump react at the start of his campaign rally in Greensboro, North Carolina on June 14. (Reuters/Jonathan Drake)

But the most radical fault lines emerged among center-right parties. These parties -- the Republicans in the U.S., the Tory party in the U.K. and other center-right parties in continental Europe -- were traditionally controlled by pro-market big and small business groups and by financial interests along with conservative social and religious traditionalists.

At the same time, these center-right parties included a large and growing minority of economically challenged voters, unskilled and semi-skilled blue-collar and white-collar workers whose incomes and jobs were threatened by trade, globalization, migration and technology. "Joe Six-Pack" was voting Republican because he was white, religious, anti-elite, unskilled and blaming his economic stagnation on immigration, affirmative action in favor of minorities and bi-coastal Democratic elites -- not the big business and Wall Street-friendly policies of the GOP establishment.

Easy access to credit and the buildup of excessive household leverage was the fig leaf that contained the gap between stagnating incomes and consumer ambitions.

Over time, however, rising income and wealth inequality, as well as a lack of economic opportunity, became the most significant threat for these otherwise religious and socially conservative voters. This large minority of Republican voters was being economically and financially shafted by trade, globalization, migration and free market policies. Their lack of skills made them losers in the globalization race.

No wonder then that after the collapse of the housing and credit bubble following the great financial crisis, their economic discontent led them to revolt against the GOP establishment. The rise of the populist Trump -- anti-trade, anti-migration, anti-Muslim, anti-Wall Street, anti-establishment -- is a reflection of the fact that the median Republican voter is increasingly closer to those who are losers, rather than winners, from globalization. 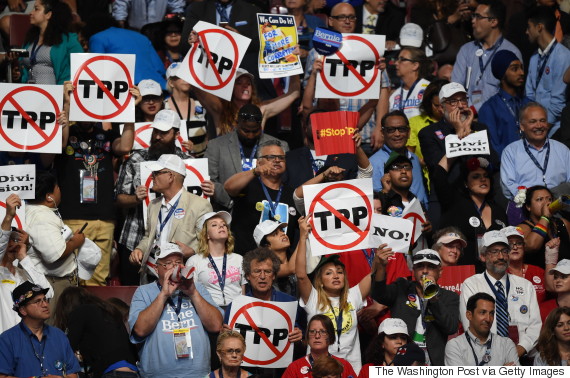 Protesters state their position on the Trans-Pacific Partnership, during the first day of the U.S. Democratic National Convention in Philadelphia on July 25. (Washington Post/Getty)

This, then, is the great political shift that has taken place. Concerns about inequality are as serious among Republican voters as they are among Democratic ones, even if some of the policy solutions they favor (lower taxes and getting "government off my back") are different from those on the left, though their anti-trade views are similar.

In other terms, after the great financial crisis, the angry, white, religious blue-collar workers who voted Republican finally realized that their economic interests were opposite to those of the pro-Wall Street, pro-globalization GOP establishment. And thus Joe Six-Pack found in the opportunist Donald Trump the supposed champion of his cause.

The Brexit Paradox and Fragmented Europe

The paradox in the U.K. is that the Brexit camp is a motley crew that includes completely different economic interests and groups. There are the Labour blue-collar voters who want more social welfare and income redistribution. There are the right-wing populist U.K. Independence Party voters who are former Tory populists with the Tory Party against high taxes and big government but also anti-trade and anti-migration. And there are economically conservative business groups who are Thatcherites and hope that a U.K. outside of the EU will lead to more pro-market policies with less regulation, less labor rights and more migration of the "right" type of foreign workers (skilled and non-Muslim). 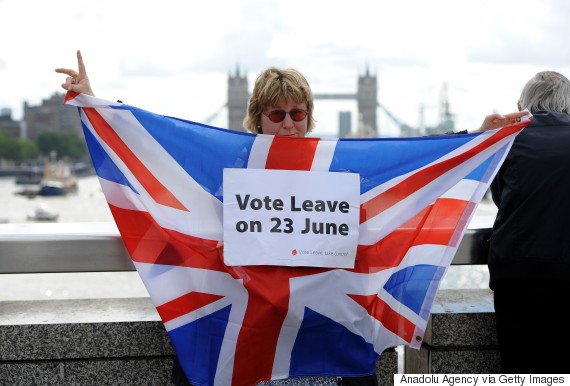 A Brexit supporter is seen as fishing boats campaigning for Brexit sail down the Thames through central London on June 15. (Kate Green/Anadolu Agency/Getty)

In continental Europe, this political fragmentation and disintegration is even more severe than in the U.S. and the U.K., given that the overall economic malaise is more severe and the economic fault lines are more dramatic.

Here are five ways globalization has realigned politics in Europe:

A new political alignment erases the old left and right paradigms of labor versus capital, workers versus business, taxes and regulation versus free enterprise.

4. There are those in Europe who believe that the only way the EU can survive and thrive is by gradually but steadily going in the direction of greater integration. This, they hope, will eventually lead to a federal Europe or a United States of Europe. But on the other side, there are those who increasingly believe that integration is facing a serious political backlash as EU nations renounce national sovereignty on an increasing number of economic, regulatory and financial issues. Meanwhile, there is a democratic deficit because elected institutions, like the European Parliament, have limited powers while others, like the E.U. Commission, are unelected.

Thus, some favor less integration and a move towards a more "variable geometry" where the principle of subsidiarity -- only competencies that can't be handled at the lower level are assigned to higher levels -- should be given more strength to allow for greater national determination of economic and other policies. While Poland and Hungary are especially vocal on this matter, the backlash against the unelected Brussels Eurocrats is quite broad in many parts of the EU, including Germany. 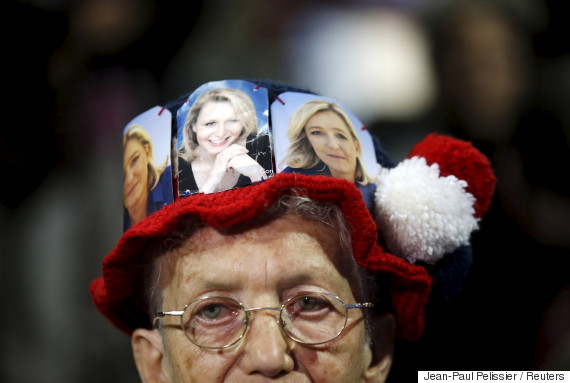 5. EU leaders have officially rejected former British Prime Minister David Cameron's charge that the Brexit vote was a consequence of the EU's inflexibility over curbing free labor migration by reaffirming the principle of freedom of labor movement as a condition for access to the single market. But there are serious divisions within the EU on this issue.

The more recent members who joined the EU after the Cold War -- Poland, Hungary and other Central and East European countries -- are adamant that the economic reforms that they undertook to join the EU were conditional on maintaining the principle of freedom of migration. Yet that principle is being challenged not only in the U.K. but also in other parts of the EU, including France, because high joblessness and fiscal constraints make acceptance of migrants -- even those from recent members of the EU -- problematic.

Across the West, a new political alignment erases the old left and right paradigms of labor versus capital, workers versus business, taxes and regulation versus free enterprise. Instead, the new alignment will be organized around pro and anti-global integration forces.

On a global scale, this crosscutting current that is overturning the political establishment is compounded by the fact that emerging economies largely favor globalization since they have been its main winners. As Branko Milanovic has pointed out, while inequality has worsened in the advanced economies, on a global scale the inequality gap has narrowed as trade and foreign investment have significantly improved living standards.

The backlash against globalization is real and mounting in advanced economies. But it can be managed through policies that ensure that the benefits of globalization continue, that mitigates collateral damage to those who lose out and that makes losers more likely to eventually join the ranks of the winners.

Trumps Around The World

Chairman of Roubini Global Economics, Professor of Economics at the Stern School of Business